RADAR CHECK: Showers linger across parts of Central Alabama this afternoon, but the sky has become partly sunny over the northern counties. Temperatures are generally in the 67-72 degree range; the average high for Birmingham on January 17 is 54. The sky will be mostly cloudy across the state tonight with lows mostly in the 50s.

Tomorrow will be mostly cloudy and mild with a few widely scattered showers possible, but most of the day will be dry with a high in the 70-75 degree range. We note the record high for Birmingham tomorrow (January 18) is 76, set in 1929. 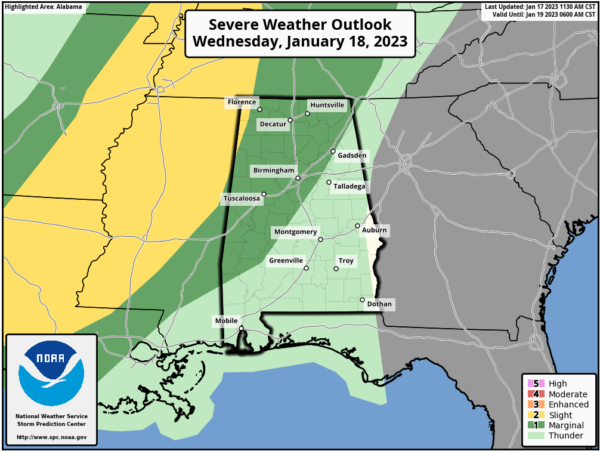 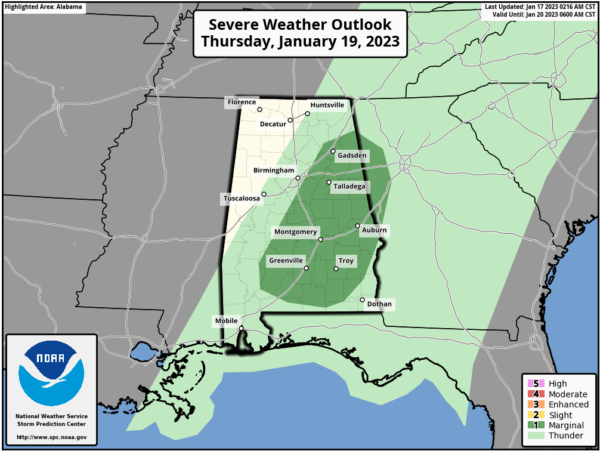 The line of strong storms will be passing through from around 1:00 a.m. until 9:00 a.m. Thursday. There will be very little surface based instability, and the main threat will come from strong wind gusts. We do note the atmosphere will be highly sheared, so a brief, isolated tornado can’t be totally ruled out, but isn’t likely. The overall severe weather threat with this event is low.

Rain amounts will be around 1/2 inch for most communities as the line will pass through quickly, and the sky will clear Thursday afternoon as drier air returns. Temperatures remain mild with a high in the 67-72 degree range.

FRIDAY AND THE WEEKEND: Friday will be dry and cool with a good supply of sunshine along with seasonal temperatures; highs in the 50s after starting the day in the 30s. Clouds increase Friday night, and we will deal with more rain over the weekend. Rain initially over South Alabama Saturday morning will spread northward, and rain is likely statewide late Saturday, Saturday night, and into much of the day Sunday. There will be no surface based instability, meaning no risk of severe storms, and probably very little thunder. Rain amounts over the weekend will be around one inch, with isolated heavier amounts.

NEXT WEEK: Monday will be dry, but another rain producer arrives Tuesday night into Wednesday. For now it looks like just rain with no risk of severe storms… See the daily Weather Briefing video for maps, graphics, and more details. 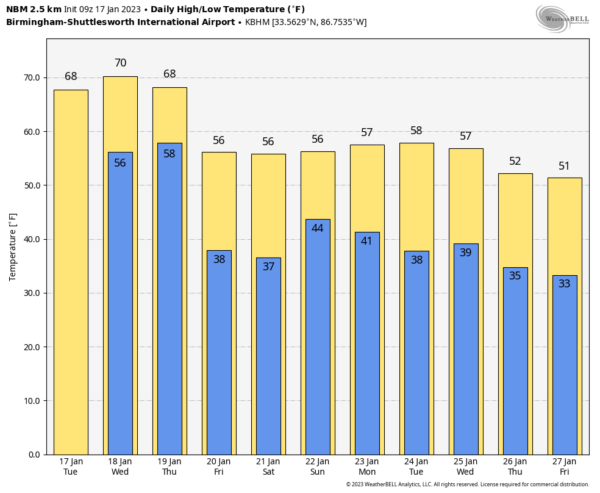 ON THIS DATE IN 1999: An F4 tornado tracked across southern Jackson, Tennessee, damaging more than 200 homes and 55 buses. The storm killed six people and injured 106.

ON THIS DATE IN 2016: A squall line of strong to severe thunderstorms moved through the Florida Peninsula, producing periodic wind damage and isolated tornadoes. Two EF-2 tornadoes touched down, one near Siesta Key in Sarasota County and the other near Duette in Manatee County. Two adults were killed and four others injured when their mobile home rolled over and was destroyed by the tornado in Manatee County.