FRONT ON THE WAY: Clouds cover most of Alabama this afternoon, and areas of light rain and drizzle are moving northward this afternoon. Temperatures are in the 70s, and we will maintain the chance of showers tonight ahead of a front approaching from the northwest.

Tomorrow will be a cloudy day with occasional showers and possibly a thunderstorm in spots; otherwise the day will be cloudy with a high in the 70s. Rain amounts over the next 24 hours will be around 1/2 inch. Then, drier air arrives late tomorrow night, and the sky becomes partly sunny Thursday as humidity levels drop. Friday will be a beautiful day with a sunny sky; we start the day in the upper 40s… the high will be in the low 70s.

THE ALABAMA WEEKEND: There is still a good bit of uncertainty due to the tropical system in the Gulf, but there is better clarity this afternoon. It looks like the best chance of rain directly associated with Eta will be south and east of Alabama. We will still mention a chance of showers Saturday, especially in areas south and east of Birmingham. The sky will be mostly cloudy with a high in the low to mid 70s. Then, on Sunday, we now expect a partly sunny sky with only a slight risk of a shower… Sunday’s high will be in the mid to upper 70s.

NEXT WEEK: Much cooler air arrives Monday. The week looks cool and dry with highs mostly in the 60s and lows in the 40s. Many communities, however, could dip into the 30s Tuesday morning with frost likely. See the Weather Xtreme video for maps, graphics, and more details.

TROPICAL STORM ETA: Eta is in the far southern Gulf of Mexico this afternoon with sustained winds of 60 mph. It could briefly become a minimal hurricane tomorrow before weakening again Thursday and Friday. The latest NHC forecast has Eta near Fort Walton Beach as a tropical depression Saturday, but there is a good chance they will need to shift the track eastward later this afternoon, which will keep the panhandle on the drier side of the system. 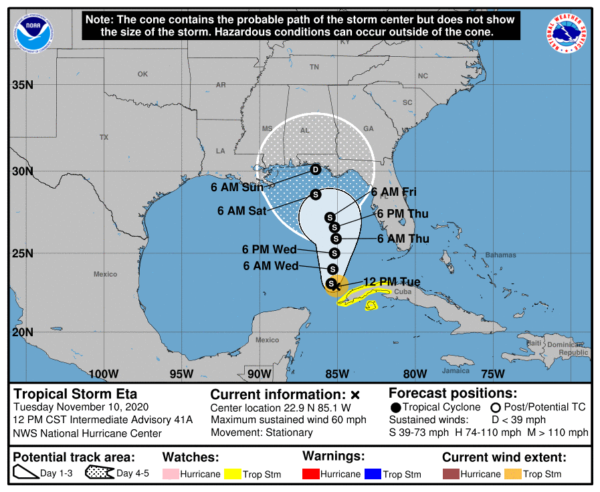 For now it looks like most of the rain with Eta will be over the Florida Peninsula. Rain amounts over the panhandle, most likely, will be much lighter.

TROPICAL STORM THETA: Theta is moving eastward over the open Atlantic; it is expected to become post-tropical this weekend southwest of Portugal.

IOTA? A tropical wave in the eastern Caribbean is expected to become Tropical Storm Iota later this week. Too early to know if this moves into the Gulf of Mexico, or heads into Central America. 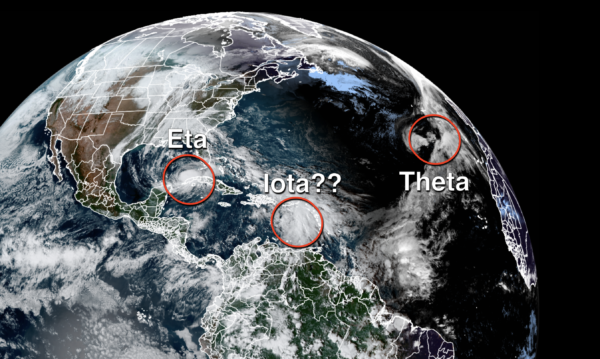 ON THIS DATE IN 1975: Today is the 45th anniversary of one of the most famous Great Lakes shipwrecks: the sinking of the SS Edmund Fitzgerald.
In 1958, it cost $8 million to build the freighter, which was the largest vessel on the Great Lakes until 1971. It was carrying 26,116 tons of taconite pellets when it went down Nov. 10, 1975, in Lake Superior, 17 miles from Whitefish Point. All 29 crewmen aboard were lost.
Approximately 240 ships have sunk in the Whitefish Point area since the first recorded sinking in 1816.

ON THIS DATE IN 2002: The “Veterans Day” tornado outbreak. A total of 88 tornadoes hit 17 states, including 12 tornadoes that killed 36 people in five states. This ranks as the third largest outbreak ever recorded in November. In Alabama, eleven tornadoes touched down, killing 12 people. Carbon Hill, in Walker County, was especially hard hit by an EF-3.