SUNNY WEDNESDAY: With a supply sky across Alabama this afternoon, temperatures are mostly in the low 60s, right at seasonal averages for late November. Tonight will be mostly clear with temperatures falling into the 35-45 degree range by daybreak tomorrow. Not quite as cold as recent nights.

For Thanksgiving Day tomorrow, the sky becomes mostly cloudy, and a band of showers will push into the northwest corner of the state by midday ahead of a cold front. Showers will push southward during the afternoon and evening hours, but with limited moisture rain amounts will be light, and we aren’t expecting any thunder. Rain amounts should be around 1/4″ for most places, and the sky will begin to clear tomorrow night.

FRIDAY AND THE WEEKEND: Friday will be mostly sunny, breezy, and colder with a high around 50 degrees. And, by Saturday morning more sub-freezing temperature are likely with many places dipping into the 20s. With a sunny sky temperatures rise to near 60 degrees Saturday afternoon. For now we are keeping the forecast dry Sunday with a high in the low 60s, but we note the European global model has introduced the idea of a surface low in the northern Gulf of Mexico, with a shield of rain moving into Alabama Sunday. This is an outlier, and other global models continue to show a dry day for the state.

NEXT WEEK: The tranquil weather pattern continues; the weather looks rain-free Monday through Thursday with highs in the 60s. A cold front will likely bring the next chance of rain by Friday December 3, or Saturday December 4. 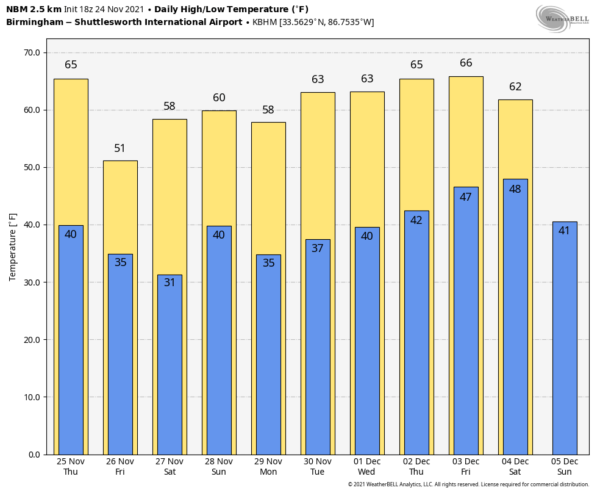 FOOTBALL WEATHER: For the high school playoff games Friday night, the weather will be clear and cold with temperatures falling from the mid-40s at kickoff, into the 30s by the fourth quarter.

BIRMINGHAM SOUTHERN AT MARY HARDIN-BAYLOR (12:00p CT kickoff in Belton, Texas): The sky will be mostly cloudy with a brief, passing shower possible. Temperatures will hover around 60 degrees during the game.

TROY AT GEORGIA STATE (1:00p CT kickoff in Atlanta): The sky will be sunny with temperatures hovering in the 55-60 degree range during the game.

ALABAMA AT AUBURN: (2:30p CT kickoff at Jordan-Hare Stadium): The sky will be sunny with a kickoff temperature near 60 degrees… falling through the 50s during the second half. A perfect day for the biggest football game of the year in Alabama.

ON THIS DATE IN 1982: Hurricane Iwa, a Category 1 hurricane, impacted the Hawaii Islands of Ni’ihau, Kaua’i, and O’ahu with gusts exceeding 100 mph and a storm surge of 30 feet. The first significant hurricane to hit the Hawaiian Islands since statehood in 1959, Iwa severely damaged or destroyed 2,345 buildings, including 1,927 houses, leaving 500 people homeless. One person was killed from the high seas, and three deaths were indirectly related to the hurricane’s aftermath.

ON THIS DATE IN 2001: A total of 36 tornadoes touched down in Alabama, which at the time established a record for the number of tornadoes on a single day in the state (it would be surpassed ten years later by the 45 tornadoes we experienced on April 15, 2011).

The first major tornado of the day cut a 39-mile path from near Kennedy in Lamar County to just south of Carbon Hill in Walker County. Two people died in a mobile home near Kennedy. An F2 tornado cut a short path through the town of Haleyville in Winston County just before 11:30 a.m., injuring thirteen people. Just northeast of Birmingham, an F2 tornado moved along I-59 near Argo as it cut a nearly 14-mile path into St. Clair County.

The strongest tornado of the day touched down about 1:19 p.m. CST southeast of Oneonta in Blount County. The tornado produced three distinct areas of F4 damage. The other two fatalities of the day occurred near Sand Rock in Cherokee County just after 3 p.m. as an F2 tornado cut an 8-mile path. Again, the fatalities were in a mobile home.

WEATHER BRAINS: Don’t forget you can listen to our weekly 90-minute show anytime on your favorite podcast app. This is the show all about weather featuring many familiar voices, including our meteorologists here at ABC 33/40.