TODAY: We’ll be caught in-between two frontal systems on Saturday that will keep our weather active throughout the day and into the late-night and overnight hours. The day will start off dry for nearly all of Central Alabama with the exceptions of locations along and south of the I-85 and US-80 corridors in the extreme southeastern parts. That moisture will lift northward through the day with showers becoming possible around the I-20 corridor in the mid-afternoon and just an hour or so later north of that. There will be no instability involved, so no thunder is expected. Highs will top out in the mid to upper 40s across Central Alabama, while overnight lows will fall into the lower 30s to the lower 40s. 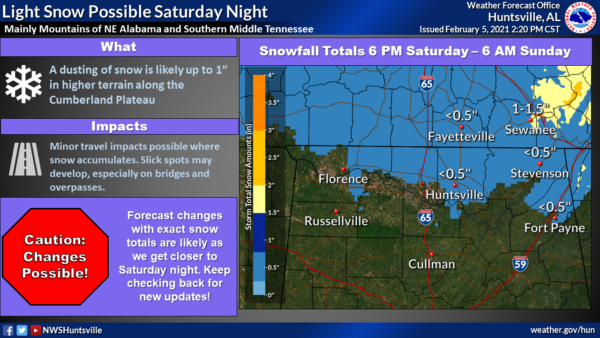 NORTH ALABAMA TONIGHT: We could see a dusting to right around 1-inch of light snow for the extreme portions of North Alabama, especially north of the Tennessee River and close to the Tennessee state line. Temperatures will drop below freezing which may allow for snow accumulations to occur during a 12-hour window from 6:00 pm tonight to 6:00 am Sunday morning. Extra lift from the Cumberland plateau may give a little boost to the snowfall in that region, which may allow for slightly higher amounts than expected. Temperatures will quickly rise into the 40s on Sunday, so any accumulated snow will quickly melt off.

SUNDAY: Clouds will be on the decrease throughout the day on Sunday, which will allow for a good bit of sunshine by the late afternoon hours. It will be warmer as highs reach the mid-40s to the upper 50s across Central Alabama.

WEDNESDAY: Moisture values really start to rise across the area and showers will be possible during the latter half of your Wednesday. Coler air will start to move in from the northwest as well, as daytime highs will be in the upper 40s to the mid-60s from northwest to southeast.

THURSDAY: An active pattern continues into Thursday as moisture will continue to flow across the area keeping showers possible at times throughout the day. A surface low looks to form to our southwest and will eventually move into the northwestern corner of the state. That will really allow for a shallow pocket of cold air to settle in over Central Alabama. At this point, all precipitation looks to stay all rain through midnight. Highs will be in the lower 40s to the lower 60s.

FRIDAY: It now looks like the deterministic GFS and European models are agreeing on a cold rain across Central Alabama throughout the entire day on Friday. The GFS is showing all of the moisture out of the area by midday with none of the rain changing over into freezing rain, sleet, or snow. Much of the same story with the European as it paints all of Central Alabama dry by the midday hour. We are still very early in the game for Friday, and these models can very easily flip back to a wintry solution. Stay tuned with us through the weekend and into the work week ahead. Highs will be in the mid-30s to the lower 50s across the area.

SEVERE WEATHER AWARENESS WEEK — FEB. 21-26, 2021: Alabama is no stranger to severe weather, including tornadoes. They can happen any month of the year and any time, day or night. However, our primary severe weather season is considered to be from November to May. Last year, 73 tornadoes touched down across Alabama. Unfortunately, four lives were lost, and over a dozen were injured. Advanced planning and increased awareness will help residents of Alabama survive these deadly storms. Throughout the week, we’ll have special posts and infographics on the blog about severe weather awareness and safety.

ON THIS DAY IN WEATHER HISTORY
• 1807: It was the famous “Cold Friday” in the Midwest and South. The temperature did not rise above zero in Ohio and Kentucky.
• 1987: Brownsville, TX, was deluged with seven inches of rain in just two hours, and flooding in some parts of the city was worse than that caused by Hurricane Beulah in 1967.