RADAR CHECK: Scattered showers and storms are in progress across Alabama this afternoon… the most numerous ones at mid-afternoon are over the southern half of the state. Additional thunderstorms are expected to form over North Alabama over the next few hours ahead of a weak surface front over Tennessee, and those could be strong. SPC maintains a “marginal risk” (level 1/5) of severe thunderstorms for areas north of a line from Reform to Gardendale to Piedmont through tonight; the main concern will be strong winds. 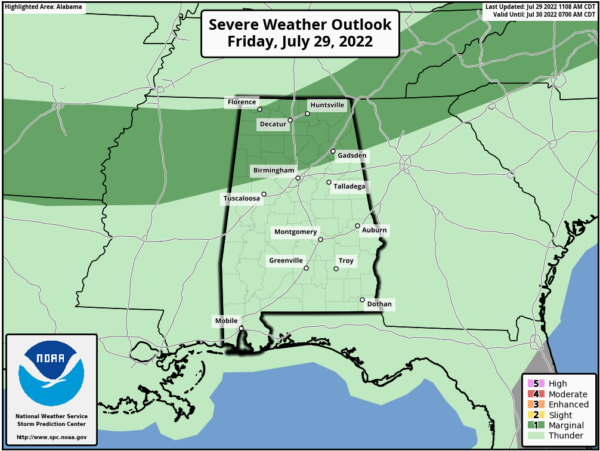 THE ALABAMA WEEKEND: Showers and storms will be more numerous statewide tomorrow as the air will more unstable, and the surface front stalls out near the Tennessee state line. Still, it won’t rain everywhere, and it certainly won’y rain all day, but any one location will see a 70-80 percent chance of getting wet at some point during the day. Heat levels will be down with highs in the mid to upper 80s in most spots, which is below average for late July in Alabama.

For Sunday, expect a mix of sun and clouds with scattered to numerous showers and storms, especially during the afternoon and evening hours. Sunday’s high will be in the 88-91 degree range.

NEXT WEEK: Scattered showers and storms will stay in the forecast, with the higher coverage coming during the first half of the week. Highs will be in the 88-92 degree range Monday through Wednesday, and in the low 90s Thursday and Friday. See the daily Weather Briefing video for maps, graphics, and more details. 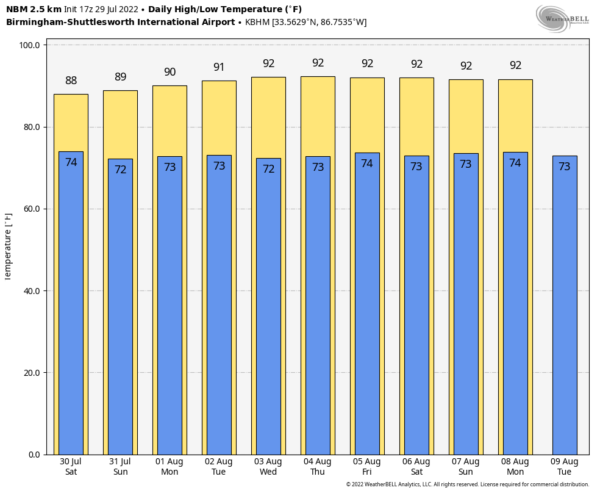 TROPICS: Still no sign of any tropical trouble across the Atlantic basin for at least the next five days as subsidence (sinking air) and dry air continues to squash any potential development.

ON THIS DATE IN 1960: Severe thunderstorms brought damaging winds, possibly as high as 100 mph to central Oklahoma. Eight planes and several hangars were damaged at Wiley Post Airfield, while two aircraft and additional hangars were damaged at Will Rogers World Airport. The winds caused seven injuries in the area, including two youths who were injured by flying debris.

ON THIS DATE IN 2004: A record-setting flash flood occurred over part of the Greenville, South Carolina, during the morning hours. Six to eight inches of rain fell just east of Berea, a northwestern suburb, which caused the Reedy River through downtown Greenville crested 9 feet above flood stage. This crest was the highest level since 1908.

I will be taking a little time off next week… look my the next Weather Briefing video here by 6:00 a.m. Monday August 8. Enjoy the weekend!