RADAR CHECK: A few showers are in progress across Northwest Alabama early this morning, ahead of an organized batch of rain and storms over the northern half of Mississippi. This activity will likely fade over the next few hours, but new showers and storms are expected to form across Alabama this afternoon and early tonight. Understand it won’t rain everywhere, but most communities have a decent chance of seeing some rain later today (odds of any one spot getting wet are 55-65 percent). We note SPC (the Storm Prediction Center) has put parts of North and West Alabama in a “marginal risk” (level 1/5) of severe thunderstorms for this afternoon… this is basically from Birmingham north and west.

Heavier storms this afternoon could produce strong winds, and all summer storms produce lots of lightning. Showers and storms will taper off tonight after sunset. Expect a high today in the low 90s for most places, right at seasonal averages for mid-July.

REST OF THE WEEK: With a stalled surface front nearby, tomorrow will be another day with scattered to numerous showers and storms across the state, most active during the afternoon and evening hours. The high will be in the 89-92 degree range.

Then, fairly routine summer weather is likely Wednesday through Friday with partly sunny days with “scattered, mostly afternoon and evening showers and thunderstorms”. Highs will be somewhere between 91 and 94 degrees for most communities.

THE ALABAMA WEEKEND: The upper ridge begins to strengthen, and heat levels will rise a bit. Look for highs in the mid 90s Saturday and Sunday, with afternoon showers and storms becoming more isolated.

NEXT WEEK: The upper high will be parked over the Deep South, meaning hot, humid days with highs mostly in the mid 90s. Showers and storms are possible during the afternoon and evening hours, but they should be widely separated. See the daily Weather Briefing video for maps, graphics, and more details. 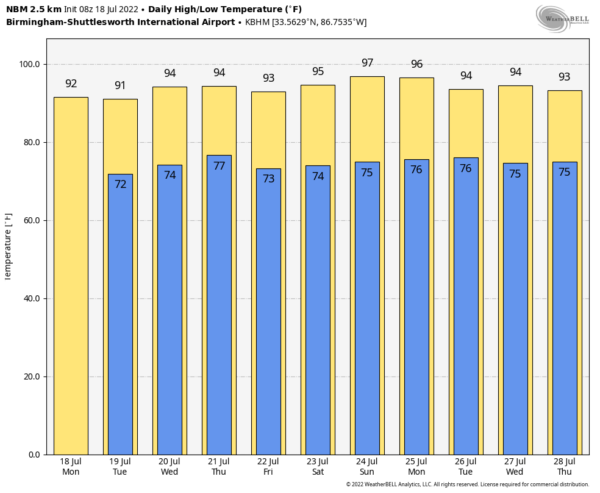 TROPICS: Once again today, the Atlantic basin is very quiet, and tropical storm formation is not expected through the week. Remember, the peak of the season comes in August, September, and early October.

ON THIS DATE IN 1996: Heavy rain in north central and northeast Illinois led to widespread flooding. Aurora reported 16.94 inches of rain, establishing a state record for the most rain in a single day. Other heavy totals included 13.60 inches at Joliet, 9.24 inches in Wheaton, 8.09 inches in DeKalb, and 7.82 inches at Elgin. This event is often called “the second most damaging weather disaster in Illinois History.”

Loo for the next Weather Briefing video here by 3:00 this afternoon… enjoy the day! 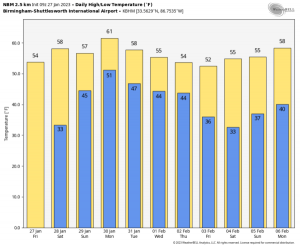