RADAR CHECK: Most of the showers and thunderstorms today are over the far southern part of the state, in association with the sea breeze front. Showers elsewhere are few and far between. The sky is partly sunny with temperatures in the low to mid 90s. Showers will end after sunset, and tonight will be mostly fair with a low in the 70s. 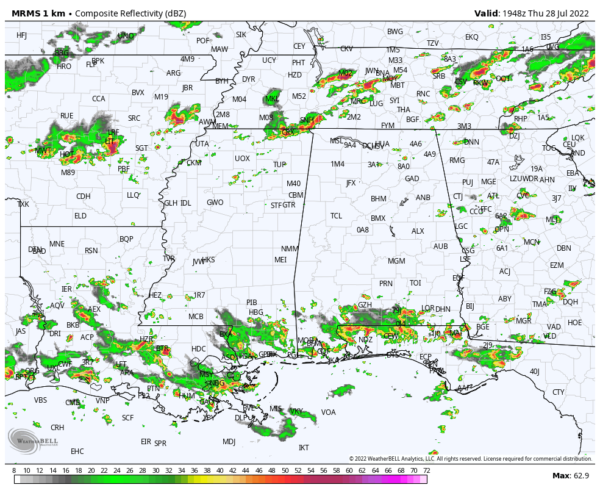 TOMORROW: Showers and storms will increase tomorrow over the northern quarter of Alabama as a weak surface boundary approaches. SPC maintains a “marginal risk” (level 1/5) of severe thunderstorms across the Tennessee Valley, where strong winds are possible with the heavier thunderstorms. 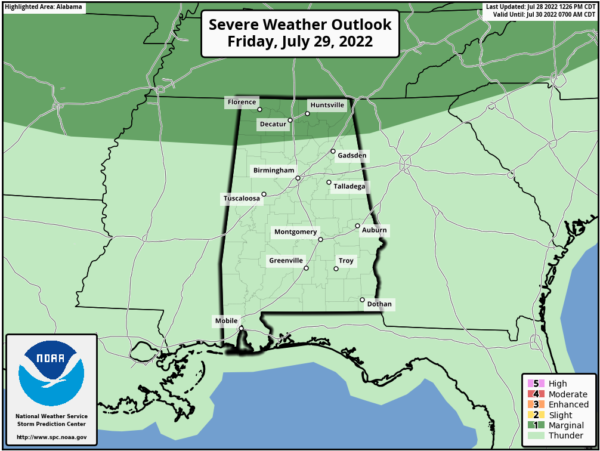 Otherwise, tomorrow will be another hot humid summer day with a high between 91 and 95 degrees.

THE WEEKEND: For Saturday and Sunday, we expect a mix of sun and clouds over the northern half of the state with scattered to numerous showers and thunderstorms both days. Best chance of getting wet will come from about noon to midnight both days, and odds of any one spot seeing rain are 50-60 percent. Highs will be in the 87-91 degree range; South Alabama will be drier and hotter with highs in the low to mid 90s.

NEXT WEEK: For now it looks like routine early August weather, with partly sunny, hot, humid days and the chance of “scattered, mostly afternoon and evening showers and thunderstorms”. Highs will be generally in the 90-94 degree range… See the daily Weather Briefing video for maps, graphics, and more details. 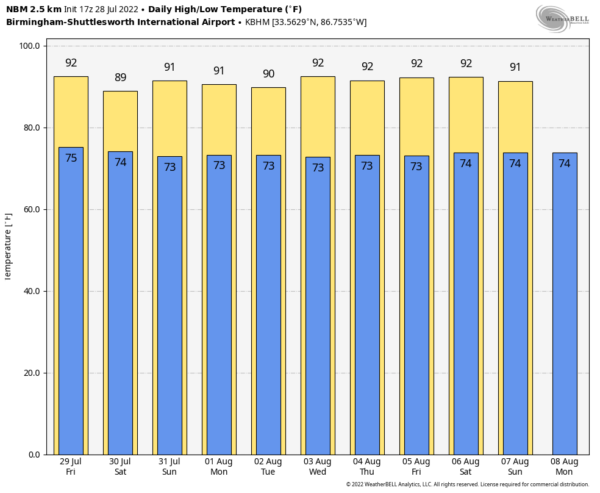 TROPICS: It has now been 26 days since we had a named tropical system in the Atlantic basin; that was Colin, a weak, short lived tropical storm along the South Atlantic coast of the U.S. All remains very quiet today and tropical storm formation is not expected through at least the next five days.

ON THIS DATE IN 1898: A severe thunderstorm produced considerable hail (some stones to 11 ounces) in Chicago, Illinois business district. Some people were hurt, not by hail, but by several hundred runaway horses spooked by the hailstones.

ON THIS DATE IN 1976: At 3:42 AM, an earthquake measuring between 7.8 and 8.2 magnitudes on the Richter scale flattens Tangshan, a Chinese industrial city with a population of about one million people. An estimated 242,000 people in Tangshan and surrounding areas were killed, making the earthquake one of the deadliest in recorded history, surpassed only by the 300,000 who died in the Calcutta earthquake in 1737, and the 830,000 thought to have perished in China’s Shaanxi province in 1556.

Look for the next Weather Briefing video here by 6:00 a.m tomorrow…