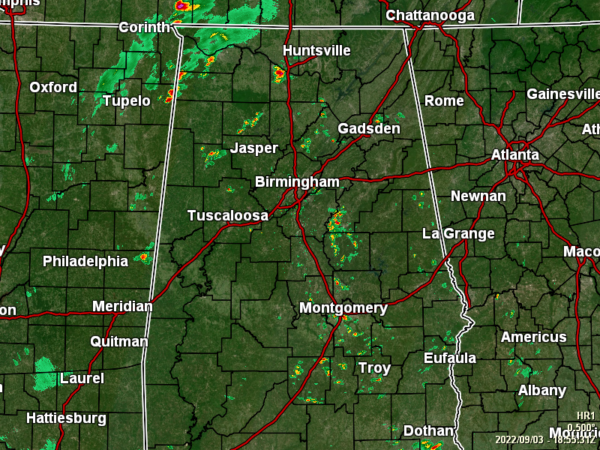 RADAR CHECK: As of the 2 pm hour, we have multiple showers and thunderstorms across portions of Central Alabama and up into the central and western parts of North Alabama. None of these are particularly heavy at this time, but I wouldn’t be surprised if a few of these start producing gusty winds below severe criteria. At this point, temperatures were ranging in the lower 80s to just below 90 degrees. Sylacauga was the cool spot at 80º,while Troy was the hot spot at 89º. Birmingham was at 84º.

REST OF TODAY: No change in the forecast from this morning… partly to mostly cloudy with scattered to numerous showers throughout the afternoon and into the evening. Some storms may be strong with gusty winds, but widespread severe weather is not expected. Highs in the mid to upper 80s. For tonight, scattered to numerous showers and storms will continue into the late-night hours, and scattered showers remaining possible overnight. Otherwise, skies will be mostly cloudy and lows in the lower to mid 70s.

SUNDAY’S WEATHER: Rain will be likely throughout the day, with some thunder mixed in as a trough will move in and will continue to pull tropical moisture over the area from the gulf. While some sun will shine at times, don’t expect too much of it. Highs in the lower 80s in the north to the upper 80s in the south. 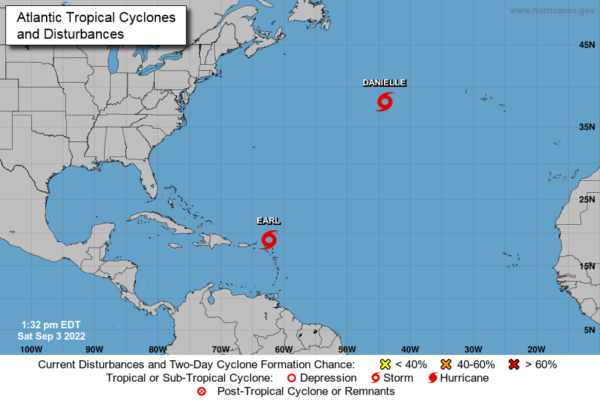 At 10 am, the center of Tropical Storm Earl was located near latitude 19.0 North, longitude 62.4 West. Earl is moving toward the west-northwest near 13 mph, and this motion with a decrease in forward speed is expected through early Sunday. A turn toward the northwest with an additional decrease in forward speed is expected Sunday through Monday. On the forecast track, the center of Earl is expected to pass just north of the northern Leeward Islands today, and north of the Virgin Islands and Puerto Rico tonight and Sunday. Maximum sustained winds are near 40 mph, with higher gusts. Slow strengthening is possible during the next few days. Tropical-storm-force winds extend outward up to 175 miles, mainly to the north and east of the center. The estimated minimum central pressure is 1003 MB (29.62 inches).

The center of Tropical Storm Danielle was located near latitude 38.1 North, longitude 44.0 West. Danielle is moving slowly toward the west-northwest near 2 mph. A continued slow west-northwest motion is forecast through tonight, but a turn to the north is expected to begin on Sunday. Maximum sustained winds remain near 70 mph, with higher gusts. Gradual strengthening is expected during the next couple of days, and Danielle is forecast to become a hurricane again. Tropical-storm-force winds extend outward up to 125 miles from the center. The estimated minimum central pressure is 990 MB (29.24 inches).