MILD NOVEMBER DAY: Temperatures are mostly in the 75-79 degree range across Alabama this afternoon with a mix of sun and clouds; the average high for Birmingham on November 9 is 68. No rain on radar, and we stay dry tonight despite the sky becoming mostly cloudy.

REST OF THE WEEK: Moisture levels will rise tomorrow, and a few showers are possible by afternoon. We will mention a chance of showers statewide tomorrow night and Wednesday ahead of a cold front. There could be a clap of thunder in spots, but severe storms are not expected. Rain amounts will be generally in the 1/2 inch range before drier air returns late Wednesday night.

Then, humidity levels will come down considerably Thursday and Friday with cooler nights in the wake of the front. The sky becomes partly sunny Thursday, and Friday will be partly to mostly sunny. Highs hold in the 70s, but early morning temperatures will drop into the 48-52 degree range by daybreak Friday.

THE ALABAMA WEEKEND: Considerable uncertainly persists in our weekend forecast due to the many possibilities with Tropical Storm Eta in the Gulf of Mexico. Global models do show moisture returning late Friday night, and we will need to mention a chance of showers both Saturday and Sunday. Not sure I would call it a wash-out by any means, but if you have something planned outdoors be aware you could be dealing with some rain at times. The sky will be mostly cloudy, and highs will be in the low to mid 70s both days.

NEXT WEEK: Again, forecast confidence is not especially high, but it looks like cooler air will enter the Deep South next week with highs dropping into the 60s, and lows in the 40s. Most of the week, for now, looks dry… See the Weather Xtreme video for maps, graphics, and more details.

TROPICAL STORM ETA: Eta is in the Southeast Gulf of Mexico with 50 mph winds; NHC is now expecting the system to remain below hurricane strength over the next five days due to dry air, shear, and cooler sea surface temperatures. The official track takes the system into the Florida Big Bend region, near Cedar Key, Saturday morning. 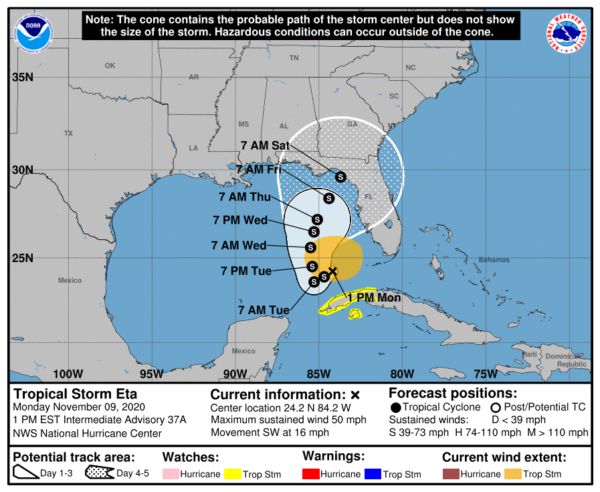 Keep in mind wholesale changes are possible in the NHC forecast as computer model spread remains very high. Solutions range from landfall on the coast of Mexico, to the Florida Panhandle, to the system remaining stationary over the Gulf for the next seven days. On the positive side, weakening is likely, and the main impact where it comes onshore will be rain. Still too early to know what, if any impact there will be for Alabama or the Central Gulf Coast. Hopefully, we will get better clarity in coming days.

ELSEWHERE IN THE TROPICS: Shower and thunderstorm activity associated with a low pressure system located several hundred miles southwest of the Azores has increased and become better organized during the past several hours. Satellite-derived wind data earlier this morning suggested that the system had not yet become distinct from a frontal boundary in the area, however, it will likely become non-frontal soon. The satellite data also indicated that the system is already producing gale-force winds. Additional development is expected, and a tropical or subtropical storm will likely form during the next day or two while the system moves eastward or east-northeastward over the northeastern Atlantic Ocean. This will have no impact on the U.S.

And, A tropical wave is forecast to move over the central Caribbean Sea, where an area of low pressure could form in a couple of days. Environmental conditions are forecast to be conducive for development, and a tropical depression could form late this week or over the weekend while the system moves slowly westward. Too early to know if this will impact the Gulf of Mexico or the U.S.

The 2020 hurricane season ends at the end of this month.

ON THIS DATE IN 1926: An estimated F3 to F4 tornado tore through La Plata, Maryland, killing 14 individuals at a small school. This storm caused 17 deaths and injured 65 others.