WARM NOVEMBER DAY: Temperatures are in the 76-81 degree range across Alabama this afternoon with a good supply of sunshine; the average high for Birmingham on November 4 is 69. Clouds will increase tonight ahead of a storm system that is producing severe thunderstorms well to the west today.

THE ALABAMA WEEKEND: A band of showers will push into the northern and western counties of the state tomorrow morning… then gradually pushing eastward during the day. A strong storm is possible around Mobile, where SPC maintains a “marginal risk” (level 1/5) of severe thunderstorms, but this is a very low end threat there. For the rest of the state, there will be little thunder and no risk of any severe storms. Showers will fade as they push eastward tomorrow afternoon, and rain for East Alabama will be very light and spotty.

Otherwise, tomorrow will be a mostly cloudy day with a high in the low to mid 70s. Then, on Sunday we expect a mix of sun and clouds with a few widely scattered showers… chance of any one spot getting wet Sunday is only 15-20 percent. The high Sunday will be in the 76-80 degree range.

NEXT WEEK: Temperatures will be close to record levels Monday; the record high for Birmingham on November 7 is 82 set in 1905, and we will be very close to that with a partly sunny sky. Temperatures slowly trend downward for the rest of the week, with highs back in the 70s Wednesday through Friday. For now much of the week looks dry, but we will keep an eye on an area of low pressure that is expected to be near the Florida Peninsula, which could push moisture into the eastern counties by Friday. See the daily Weather Briefing video for maps, graphics, and more details. 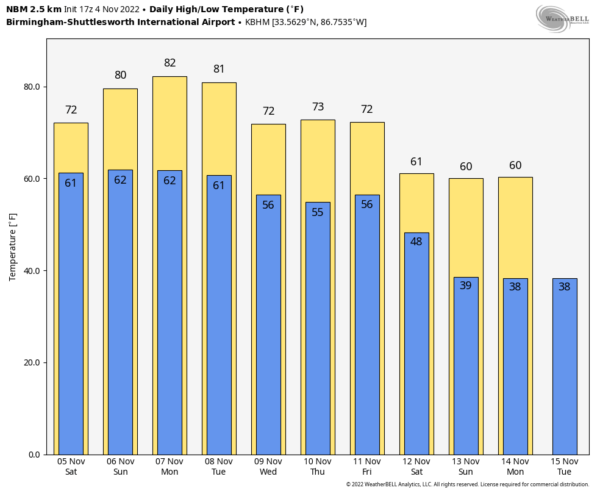 TROPICS: Tropical Depression Lisa is in the Bay of Campeche (the far Southwest Gulf of Mexico) this afternoon; it is expected to dissipate by tomorrow. Elsewhere, a large non-tropical low pressure system is expected to develop across the northeastern Caribbean Sea and southwestern Atlantic by the latter part of the weekend.

The system is initially expected be very broad and disorganized, but it could begin to acquire subtropical or tropical characteristics during the early part next week. Environmental conditions could support additional gradual development and a subtropical or tropical depression could form during the early to middle portion of next week while the system moves generally northwestward or westward over the southwestern Atlantic. Regardless of development, there is an increasing risk of coastal flooding, gale-force winds, heavy rainfall, rough surf, and beach erosion along much of the southeastern United States coast, the Florida east coast, and portions of the central and northwestern Bahamas during the early to middle part of next week.

FOOTBALL WEATHER: The sky will be mostly fair tonight for the high school playoff games; temperatures will fall from the low 70s at kickoff, into the upper 60s by the final whistle.

UAB will host UTSA tomorrow at Protective Stadium in downtown Birmingham (2:30p CT kickoff)… the sky will be cloudy with a chance of a few showers during the game. Temperatures will be in the mid 70s.

And, Alabama will be in Baton Rouge to play LSU in “Death Valley” (6:00p CT kickoff)… the sky will be cloudy with temperatures will be close to 70 degrees during the game. No rain is expected.

ON THIS DATE IN 1935: Called the Yankee Hurricane, this Category 2 storm affected the Bahamas and South Florida. The storm remains the only tropical cyclone to hit Miami from the Northeast in November.

ON THIS DATE IN 1985: Heavy rains from the remnants of tropical storm Juan dropped 10 to 19 inches of rain on West Virginia and surrounding states, causing 62 deaths. A maximum rainfall amount of 19.77 inches was recorded near Montebello in the Blue Ridge Mountains in Virginia. The flood in West Virginia was considered the worst in the state’s history.