RADAR CHECK: We have a few small, isolated showers and thunderstorms over far West Alabama this afternoon… one is west of Florence at mid-afternoon… others are across parts of Sumter, Greene, and Choctaw counties. The rest of the state is dry with a mostly sunny sky… temperatures are in the mid to upper 80s. The isolated showers will end this evening, and tonight will be mostly fair with a low in the 60s.

TOMORROW THROUGH THE WEEKEND: Tomorrow will be another partly to mostly sunny day with only a small risk of a shower for any one given point. Temperatures will be a few degrees lower as an upper low to the east drifts westward. Then, over the weekend, look for partly sunny days, fair nights, and just a few widely scattered afternoon and evening showers or storms, mainly over the northern third of the state. Odds of rain for a specific place will be in the 15-25 percent range both days.

NEXT WEEK: The upper ridge over the Deep South will hold, keeping temperatures above average with highs in the upper 80s and low 90s. Afternoon showers can’t be ruled out most days, but they will be very widely spaced, and no widespread rain is expected. See the Weather Xtreme video for maps, graphics, and more details. 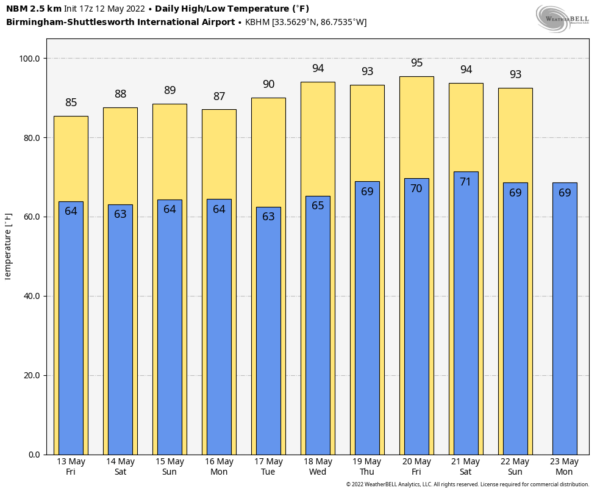 ON THIS DATE IN 1760: Ben Franklin was the first person to identify nor’easters. In a letter on this date to Alexander Small of London, Franklin described an experience that happened to him in November 1743 when storm clouds in Philadelphia blocked his view of an eclipse. Franklin assumed that the storm had blown in from the northeast because the surface winds at his location were from that direction. He was puzzled to find out later that his brother had viewed the eclipse with no problems and that the storm had arrived in Boston four hours later. The information caused Franklin to surmise correctly that the storm had moved from southwest to northeast.

ON THIS DATE IN 1997: A towering F1 tornado ripped its way through the middle of Miami, Biscayne Bay, and Miami Beach right after lunch, smashing cars and windows, and tossing trees skyward.