**No afternoon Weather Briefing video today…. back to the two a day schedule tomorrow** 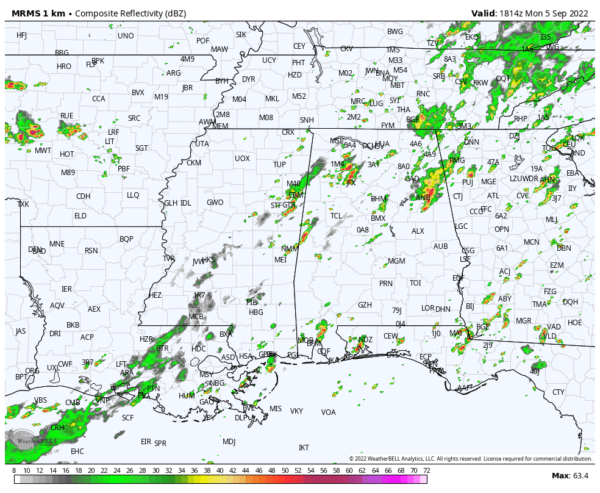 We will maintain the chance of scattered showers and thunderstorms daily through Thursday. Most of the showers, but not all, will come from about noon to midnight, and highs will be in the mid 80s most days. We do expect intervals of sunshine each day.

FRIDAY AND THE WEEKEND: Precipitable water values rise again, and the weather looks fairly wet Friday through Sunday. No “washout”, but occasional showers and thunderstorms are likely each day, and heavy rain is possible at times. We expect only a limited amount of sun, and highs will be in the 78-83 degree range. Showers will be fewer in number near the Gulf Coast with some good intervals of sunshine there.

NEXT WEEK: Forecast confidence is not especially high; some global models have hinted at a nice surge of drier, continental air moving in here Monday and Tuesday with lower humidity and cooler nights. But, newer runs are showing a cut-off upper low near Memphis for the week, which would keep Alabama in an unsettled pattern some some risk of showers and storms each day. For now we will keep trending toward drier weather next week, but know that could change. Highs will be in the 80s. 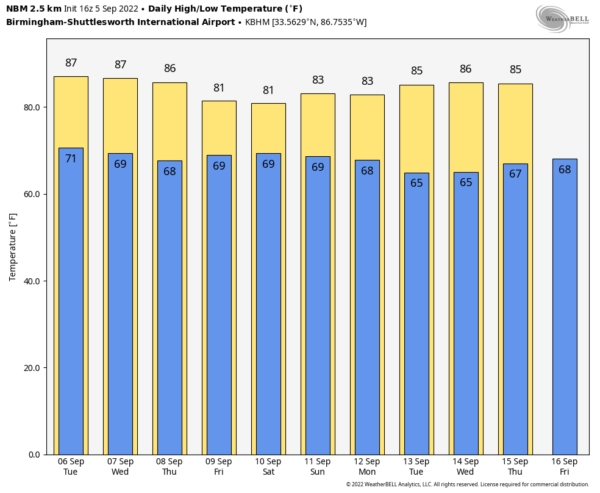 A tropical wave is also being monitored in the far eastern Atlantic; it has a 50 percent chance of development over the next five days.

Danielle, Earl, and the tropical wave will remain far east of North America, and no tropical systems are expected to threaten the U.S. for at least the next 7-10 days as this very quiet hurricane season continues. 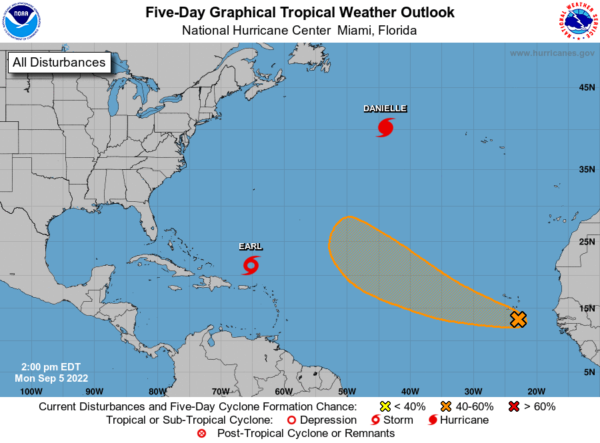 ON THIS DATE IN 1950: Hurricane Easy was an erratic and unpredictable hurricane that lingered over the Tampa Bay area for days, dropping torrential rains and causing damage especially in Cedar Key, Florida where the storm eventually made landfall. This hurricane dumped 38.7 inches of rain in 24 hours in Yankeetown, a record for the U.S. at the time.

ON THIS DATE IN 2017: Hurricane Irma became a category 5 hurricane with maximum sustained winds of 180 mph. This made Irma one of strongest hurricane ever observed in the open Atlantic Ocean.

ON THIS DATE IN 2019: After battering the Bahamas, Hurricane Dorian turned northwestward and moved parallel to the southern U.S. East Coast. Bands of showers and thunderstorms ahead of the storm’s center produced over a dozen tornadoes across northeastern South Carolina and eastern North Carolina during the morning of Wednesday, September 5. Fortunately for South Carolina and southeastern North Carolina, Dorian continued to turn to the right and the center remained offshore as it approached Cape Fear.