MOISTURE LEVELS RISING: We will bring in the chance scattered showers and thunderstorms across Alabama later today as moisture levels are rising. Not an “all day” kind of rain, but some spots will see a passing shower or storm later this morning or during the afternoon hours. Otherwise, expect a mix of sun and clouds with a high in the mid 70s. Not much change tomorrow; a few random, scattered showers or storms are possible with a high in the 76-80 degree range.

WEDNESDAY/THURSDAY: Showers will remain scattered during the day Wednesday, but a cold front will bring an organized band of rain and storms into the state Wednesday night into the pre-dawn hours Thursday. SPC has an “enhanced risk” (level 3/5) of severe thunderstorms defined for the northwest corner of the state… most of Alabama is in a level 2 “slight risk”. The exception is over the southeast counties, where the storms will be weakening, and a “marginal risk” (level 1/5) is in place there. 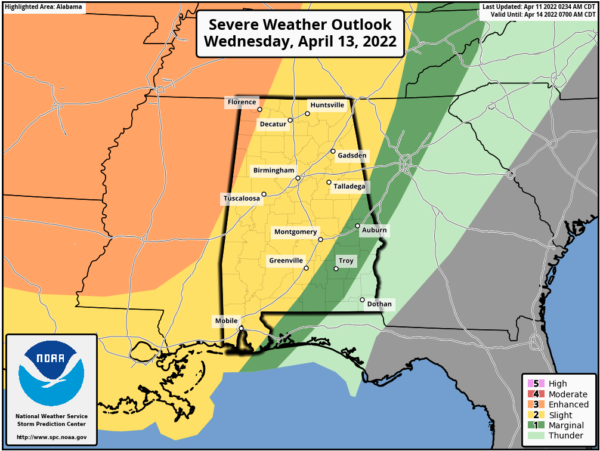 The line of storms will enter Northwest Alabama around midnight Wednesday night, and will pass through the state during the early morning hours Thursday. For most places, the line will be moving through late Wednesday night between midnight and 7:00 a.m. Thursday. The core threat will come from strong, potentially damaging straight line winds. With the surface low well to the north (near the Canadian border), shear values won’t be especially high, and the tornado threat for now looks low. But, as always in a case like this, you can’t rule out an isolated tornado in the line.

The sky becomes partly to mostly sunny during the day Thursday as dry air returns… and Friday looks dry with a good supply of sunshine. The high both days will be in the mid 70s, right at seasonal averages.

THE ALABAMA WEEKEND: A northward moving warm front will bring rain back into Alabama over the Easter weekend. Showers could begin as early as Saturday afternoon, and periods of rain are likely Saturday night and Sunday as the front stalls out over the region. Some thunder is possible, but for now severe storms are not expected. Highs will remain in the 70s.

NEXT WEEK: Showers remain possible Monday, mainly over North Alabama, then drier air will likely move in during the mid-week period. Highs during the week will be mostly in the 76-81 degree range… See the Weather Xtreme video for maps, graphics, and more details. 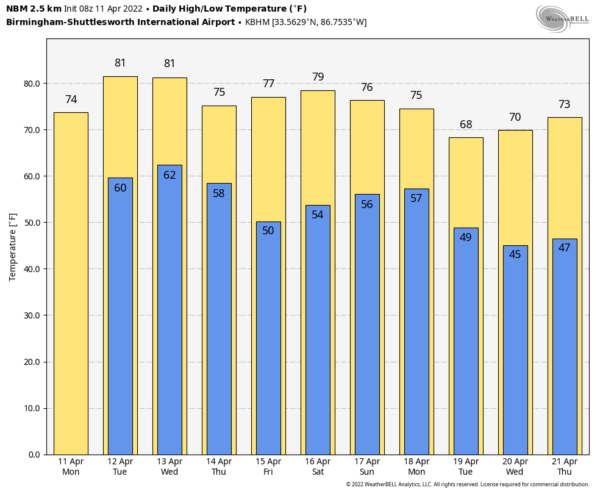 ON THIS DATE IN 1965: The “Palm Sunday Outbreak” consisted of fifty-one tornadoes, killing over 250 people and causing more than 200 million dollars damage. Indiana, Ohio and Michigan were hardest hit. Although no F5s were officially reported, at least 22 were rated as F3 or F4.

ON THIS DATE IN 2011: A line of severe thunderstorms producing signifiant wind damage across Alabama… some of the hardest hit areas were in Aliceville in Pickens County, Brent in Bibb County and many spots around the Birmingham metro area. Most of the damage reports consisted of single trees or groups of trees that had been uprooted, and though there were sporadic reports of structural damage. This was the beginning of an extremely active severe weather month; historic tornado outbreaks would follow on April 15 and April 27.