WARM OCTOBER DAY: With a partly to mostly sunny sky, temperatures are mostly in the 82-86 degree range across Alabama this afternoon, well above the average high of 77. No rain on radar, and tonight the sky will be mostly clear with a low in the 60s.

REST OF THE WEEK AND THE WEEKEND: Warm, dry weather continues tomorrow… with a good supply of sunshine the high will be in the 84-88 degree range. FYI… the record high for Birmingham is 89 set in 1984. It won’t be that warm, but it will be close.

The day Friday will be warm and mostly dry with a high in the mid 80s; a shower could pop up over the northwest corner of the state late in the day. A cold front will bring a chance of showers Friday night, generally between 6:00 p.m. and 6:00 a.m. Saturday. Rain amounts should be under a quarter of an inch with limited moisture.

Then, on Saturday, the coolest air so far this season will roll into the state with a brisk northwest wind of 10-20 mph. The sky will be partly to mostly sunny, and the high will be in the 66-70 degree range. By early Sunday with a clear sky and a diminishing wind, we expect a low between 41 and 48 degrees… it is possible one or two of the normally colder spots could reach the upper 30s. Then, during the day Sunday, the sky will be sunny with a high around 70 degrees.

NEXT WEEK: The first half of the week will be dry with pleasant days and cool nights; highs will be in the 70s, and lows in the 40s and 50s. A system will likely bring some rain to the state Thursday or Thursday night… See the Weather Xtreme video for maps, graphics, and more details. 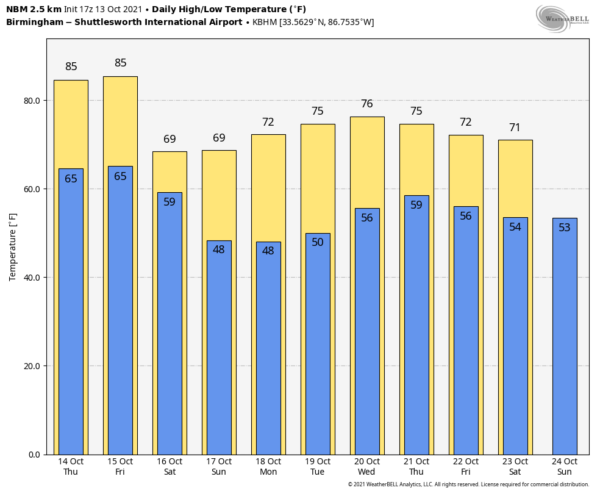 TROPICS: The Atlantic basin is very quiet; a disturbance east of the Bahamas is not expected to develop as it drifts to the east. And, eastern Pacific Hurricane Pamela moved into the west coast of Mexico this morning, and is dissipating inland this afternoon. Moisture will move up into parts of Texas where a flash flood watch is in effect for the broad area from Del Rio to Dallas/Fort Worth.

FOOTBALL WEATHER: We have one college game tomorrow night…

GEORGIA SOUTHERN AT SOUTH ALABAMA (6:30p CT kickoff Thursday at Hancock Whitney Stadium): The sky will be fair with temperatures falling from 82 at kickoff, though the 70s during the game.

For the high school games Friday night, the sky will be mostly cloudy with a shower possible at most stadiums; temperatures will be in the 70s. Not expecting any especially heavy rain or any lightning.

For the college games Saturday…

AUBURN AT ARKANSAS (11a CT kickoff in Fayetteville): A beautiful fall day in Arkansas. Sunshine in full supply with temperatures rising from 62 at kickoff into the mid 60s by the second half.

SAMFORD AT WOFFORD: (2:30p CT kickoff in Spartanburg, SC): Expect a partly sunny sky; a shower is possible late in the game. Temperatures will be in the 70s.

JACKSONVILLE STATE AT SAM HOUSTON STATE: (2:00p CT kickoff in Huntsville, Texas): A sunny day with temperatures falling from near 75 at kickoff, into the upper 60s by the final whistle.

TROY AT TEXAS STATE: (2:00p CT kickoff in San Marcos, TX): A cloudless sky; lots of sunshine with temperatures in the 70s.

UAB AT SOUTHERN MISS: (2:30p CT kickoff in Hattiesburg): It will be a fun filled day; the temperature at kickoff will be near 73 degrees, falling into the upper 60s by the fourth quarter.

ALABAMA AT MISSISSIPPI STATE (6:00p CT kickoff in Starkville): Perfect football weather. A clear sky with temperatures falling from near 67 at kickoff, into the 50s by the second half.

ON THIS DATE IN 2006: The October 2006 Buffalo storm was an unusual early-season lake effect snowstorm that hit the Buffalo, New York area, and other surrounding areas of the United States and Canada. Downtown Buffalo reported 15 inches from this event. Depew and Alden record 24 inches, the most from this lake effect storm.

Dry Pattern For Most Of Alabama Through The Weekend : The Alabama Weather Blog

Passengers being rescued from plane stranded amidst heavy snowfall in Istanbul Airport : meteorology

Dry Pattern For Most Of Alabama Through The Weekend : The Alabama Weather Blog

Passengers being rescued from plane stranded amidst heavy snowfall in Istanbul Airport : meteorology