WONDERFUL WINTER DAY: With ample sunshine, temperatures are generally in the 60s across Alabama this afternoon… we note Mobile has reached 70 at mid-afternoon. The weather will stay mild and mostly dry tomorrow, although a few showers could develop along the Gulf Coast by afternoon.

THURSDAY: A cold front will bring a band of showers and thunderstorms into Alabama Thursday. SPC has much of the state in a “slight risk” (level 2/5) of severe thunderstorms… 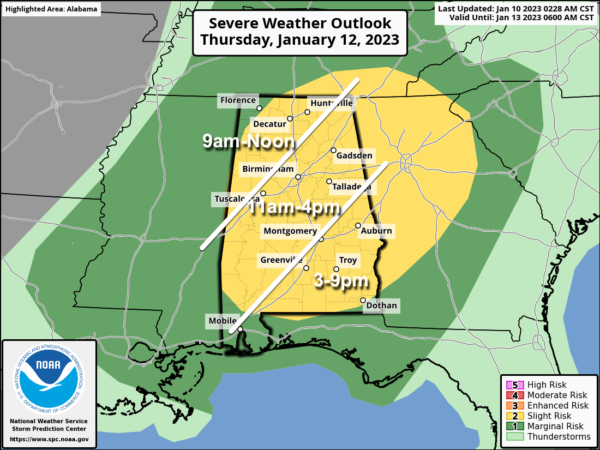 Storms will enter the northwest corner of the state Thursday morning, then progressing southward during the day. The main threat will come from strong, potentially damaging winds. A brief, isolated tornado can’t be ruled out, especially across Southeast Alabama where instability values will be higher during the afternoon hours. Rain amounts of around 1/2 inch are expected, and the high will be in the 65-70 degree range.

FRIDAY AND THE WEEKEND: Much colder air invades the Deep South Friday; with a mix of sun and clouds temperatures won’t get out of the 40s over much of North Alabama with a chilly north breeze. A few snow flurries are possible Friday morning across the northern third of the state, but no accumulation or impact is expected. The weekend will feature sunny cool days and clear cold nights. Highs will be mostly in the 50s Saturday, followed by 50s and 60s Sunday. Morning lows will be in the 25-35 degree range. Colder spots will see low 20s Saturday morning.

NEXT WEEK: Another wave will bring a chance of showers and storms to the state Monday night and Tuesday, followed by another chance of wet weather by Thursday or Friday. Highs will be mostly in the 60s through the week… See the daily Weather Briefing video for maps, graphics, and more details. 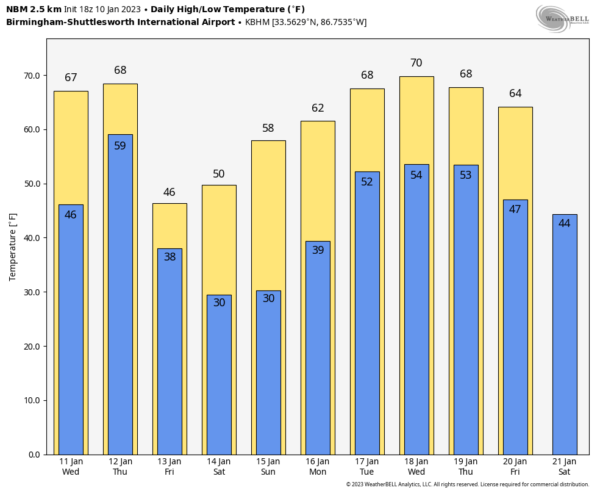 ON THIS DATE IN 1982: Bitterly cold weather was found across Illinois. Of the 109 weather reporting stations in the state, 48 of those reported lows of 20 degrees below zero or colder. Some of the most frigid temperatures included 27 below zero at Rockford, 26 below zero at Chicago, and 25 below zero at Kankakee and Peoria. The Freezer Bowl was played between the Cincinnati Bengals and the San Diego Chargers in bitterly cold wind chills. The air temperature was -9F, but the wind chill, factoring in a sustained wind of 27 mph, was -37F.