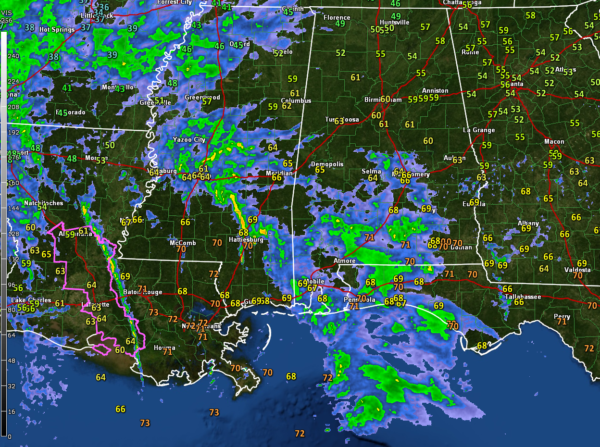 Things are calm across Alabama at 8:30 p.m. tonight.

Showers are moving northward across South Alabama from Demopolis and Selma down to Greenville and south from there into the Gulf of Mexico. There is a little bit of lightning associated with the activity in Monroe County that has developed in the last few minutes. Lightning is increasing in southern Mississippi at this time as storms build south of Jackson.

This activity is associated with a maritime warm front that is moving northward. At the same time, an 850 millibar low-level jet is becoming established across the area. Showers and storms will continue to increase through the evening as that jet gets better established and overspreads the area.

These storms will continue to increase and lift northeastward into Central Alabama and eastern Mississippi later tonight.

The potential will be there for severe weather as the warm front lifts northward later tonight starting first in areas from Clarke County northward into Marengo, Southern Hale, southern Greene, and Sumter Counties and spreading eastward during the early morning hours as a pre-frontal line of storms pushes into the state.

Damaging winds will be the primary threat, but a few tornadoes will be possible as well if thunderstorms can co-locate with instability and shear.

We will continue to track the system through the night with frequent updates.