THE CENTRAL ALABAMA WEEKEND
We’ll start off with rain and a few embedded thunderstorms during the early morning hours moving into the western sections of Central Alabama, but as the activity progresses eastward, the rain will begin to dissipate slowly and become more scattered. No severe weather is expected with the accompanying cold front, as the associated low will be moving much farther to our north and taking the energy with it. Highs will range from the upper 60s in the northwest to the lower 80s in the southeast.

We’ll keep a very small chance of showers in the forecast for Sunday as the cold front will have stalled out over the area. We’ll have a mix of sun and clouds with afternoon highs in the mid 70s to the mid 80s.

THE WORK WEEK AHEAD
Skies will be partly to mostly clear for Monday and Tuesday as the washed-out cold front continues to hang around the northern parts of the area. A few scattered showers may be possible for the northern-third of the area and up into North Alabama, but the rest of Central Alabama looks to stay dry. Highs on both days will be in the upper 70s to the mid 80s.

Weather becomes interesting on Wednesday as we’ll be sandwiched in between high pressure over the Carolinas and a building system off to the west. We’ll also be watching the potential of a tropical or subtropical system moving toward the east coast of Florida. By Thursday evening, we could see a few showers from the northern periphery of that system as it moves into the Gulf of Mexico, but the approaching cold front from the west will quickly usher that system back to the east and away from us. Any shower activity looks to end by Friday evening. Highs will be in the lower to mid 70s on Wednesday and Thursday, and in the mid 60s to the mid 70s on Friday 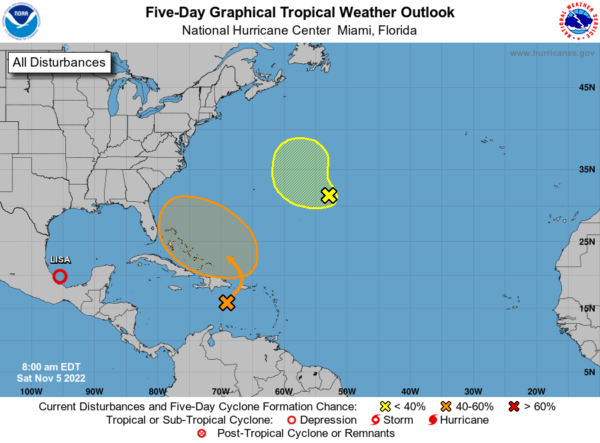 THE TROPICS (10 pm Friday)
Tropical Depression Lisa was located around 250 miles west-northwest of Ciudad el Carmen, Mexico with winds at 30 mph. The depression is moving toward the north near 3 mph, and this general motion is expected to continue into early Saturday. Lisa or its remnants are then forecast to stall or drift southward through the remainder of the weekend. Maximum sustained winds are near 30 mph (45 km/h) with higher gusts. Gradual weakening is forecast, and Lisa is expected to become a remnant low by early Saturday.

Southwestern Atlantic: A large non-tropical low pressure system is expected to develop across the northeastern Caribbean Sea and southwestern Atlantic by the latter part of the weekend. The system is initially expected to be very broad and disorganized. However, it could begin to acquire subtropical or tropical characteristics during the early part of next week, and a subtropical or tropical depression could form during the early to middle portion of next week while the system moves generally westward to west-northwestward over the southwestern Atlantic. Regardless of development, there is an increasing risk of coastal flooding, gale-force winds, heavy rainfall, rough surf, and beach erosion along much of the southeastern United States coast, the Florida east coast, and portions of the central and northwestern Bahamas during the early to middle part of next week.
* Formation chance through 48 hours… low… near 0 percent.
* Formation chance through 5 days… medium…50 percent.

Central Subtropical Atlantic: A broad area of showers and a few thunderstorms located several hundred miles east of Bermuda is associated with an elongated, non-tropical area of low pressure. Any tropical or subtropical development of this disturbance should be slow to occur during the next day or so while it moves westward to west-northwestward. The system is forecast to encounter stronger upper-level winds on Saturday and Saturday night, and further development is not anticipated beyond that time.
* Formation chance through 48 hours… low… 10 percent.
* Formation chance through 5 days… low… 10 percent.

ON THIS DAY IN WEATHER HISTORY – 2002
Severe thunderstorms moved across southeastern Alabama and the Florida panhandle, producing wind damage and several tornadoes. A tornado struck the Alabama town of Abbeville killing 2 people and injuring 25.