Arrowhead Stadium in the snow.

AccuWeather recently published an interesting article and poll on the subject of the NFL and its policy of playing most games during adverse weather. Before I make my suggestions I want to make a couple of clarifications.

My opinion: Things should continue as they are. NFL games should continue to be played in the snow and cold and similar conditions. It is part of the tradition of the game. However, I would make two changes: 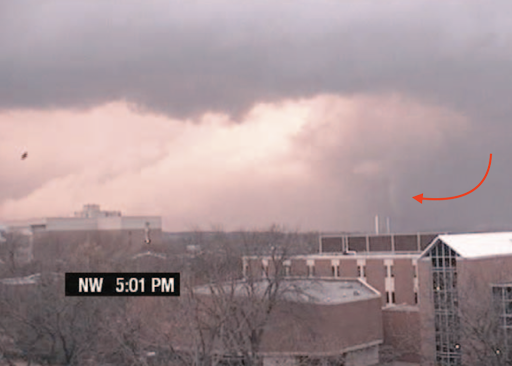 Based on the approaching storm, at 4:45pm LST officials ordered an evacuation of the stadium based on a “scenario1″ event,” urging people to seek shelter in their cars to avoid lightning and hail. At this same time, a tornado was reported 8 miles southwest of the stadium. That information resulted in a “scenario 2” evacuation being ordered by 4:50 pm LST, and fans instead were told to seek shelter in large buildngs, most a 5–10-minute brisk walk away, stadium concourses, restrooms, and ditches. [The photo] shows the IEM webcam at 5:01pm LST from the ISU campus, one mile from the stadium, as a tornado caused F2 damage 3 miles NW of the stadium. More than10,000 people took shelter in the university’s Hilton Coliseum, with several thousand more walking to other buildings. Even larger numbers, however, remained outside and unsheltered.

If 80,000 people are in a stadium, a 10-15 minute tornado warning will not suffice. In this era of mesoscale meteorological modeling, a game should be delayed or cancelled hours in advance when there is a high risk of tornadoes in the vicinity. If anything but the very weakest of tornadoes strike a stadium with thousands of people on the property there is a real chance of mass casualties.