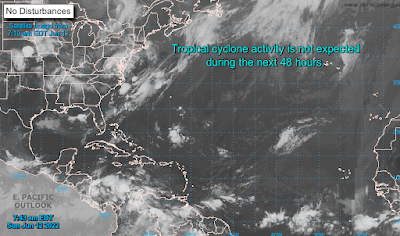 See the face in the Atlantic.

You might be thinking that’s the Grinch that stole the Hurricanes, but no not really. It’s June, a bit too soon for Atlantic action but it’s strong and alive and steering everything West, low under the high. See the low waves that just came off of Africa? 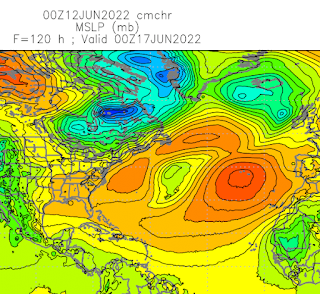 Check out that High locked in place. 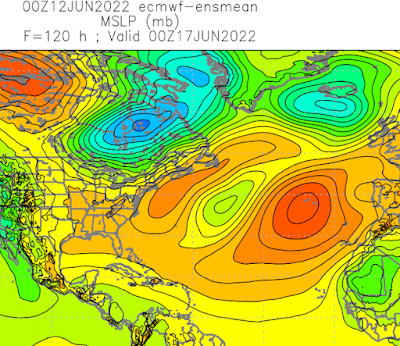 It’s Sunday morning, a lot to do in a short time and there’s not much to talk about happening now. Yes, there’s clusters of clouds in the Gulf of Mexico and there’s a front (weak barely there but there front) draped across Florida. In theory or according to models something forms in the EPAC so I always count 5 days or so from that for the GOM/CARIB but sometimes something pops up and surprises us home grown wise. 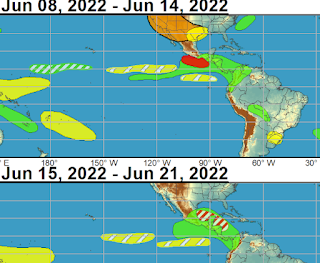 Note as we move deeper into June.

Chances for the Caribbean to come alive close in.

But today, nothing out there specifically.

Between the strong high and the Saharan Dust that reigns in the Atlantic in June through parts of July it’s not extremely favorable. But if anything sneaks in to a slot of possibilities then watch out as the water is warming up … especially along the East Coast and the Loop Current is in place and signs still point to a very active hurricane season. Old fashioned hurricane season possibly, the kind that come alive late and are mean for weeks.

Looking at very long range models and various data I’m very concerned about the period from Mid July out… Mid to late July looks impressive for tropical trouble moving all the way through August.

The season splits between early storm (July and August) and the bumper crop of September Remember Hurricanes. Early Fall weather and strong cold fronts change everything, they rearrange the patterns and different steering currents take hold.

So have a wonderful weekend! Keep filling up your hurricane supplies. Going to mention a few products this week that are a must for anyone and actually fairly cheap to get to keep in hand in large amounts. People get hurt often AFTER the hurricane while cleaning up, taking down shutters and from lack of sleep making careless mistakes, accidents happen so these are as important as what you want to nibble on in a hurricane.

Don’t get me started on that…

Make sure you have it on hand!

Stay tuned……..we are going to rock and roll soon with tropical waves developing so use this time now wisely!