SPC PRODUCTS
The Storm Prediction Center (SPC) is part of the National Weather Service (NWS) and the National Centers for Environmental Prediction (NCEP). Their mission is to provide timely and accurate forecasts and watches for severe thunderstorms and tornadoes over the contiguous United States. The SPC also monitors for hazardous winter weather and fire weather events and issues specific products for those hazards. We use the most advanced technology and scientific methods available to achieve this goal. 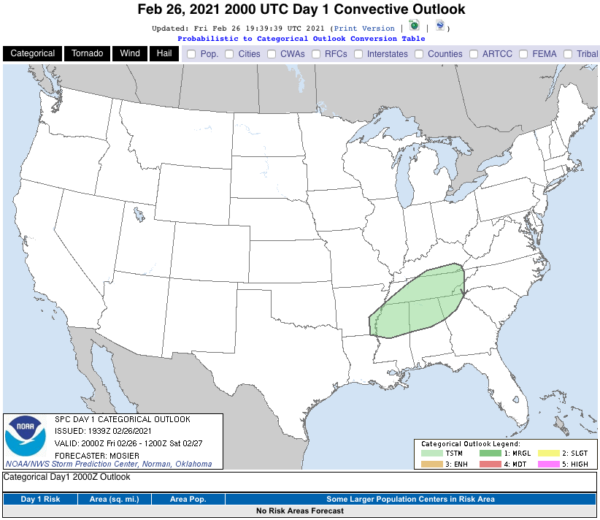 CONVECTIVE OUTLOOKS
SPC issues Day 1, Day 2, and Day 3 Convective Outlooks that depict non-severe thunderstorm areas and severe thunderstorm threats across the contiguous United States, along with a text narrative. The categorical forecast specifies the level of the overall severe weather threat via numbers (e.g., 5), descriptive labeling (e.g., HIGH), and colors (e.g., magenta). The probabilistic forecast directly expresses the best estimate of a severe weather event occurring within 25 miles of a point. The text narrative begins with a listing of severe thunderstorm risk areas by state and/or geographic region. This is followed by a concise, plain-language summary of the type(s) of threat along with timing that is focused on the highest-risk areas. The rest of the outlook text is written in scientific language for sophisticated users. This technical discussion usually includes a synopsis section to provide a general overview of the weather pattern, emphasizing features that will influence the severe and general thunderstorm threats. Additional sections of the discussion are usually separated by geographic areas. Within these individual geographic areas, the text offers meteorological reasoning and justification for the type of coverage and intensity attendant to the severe weather threat. 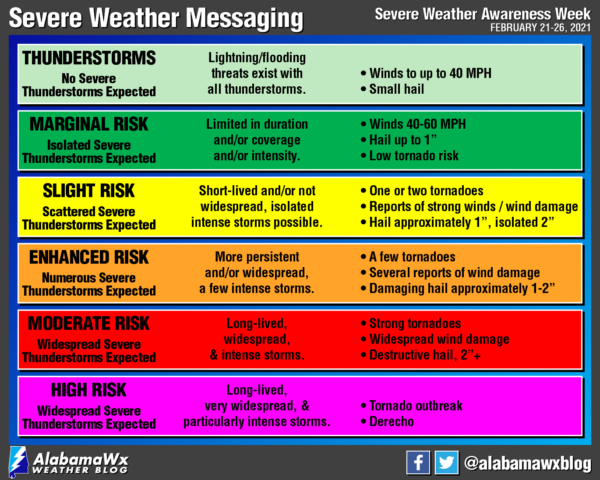 The level of categorical risk in the Day 1-3 Convective Outlooks is derived from probability forecasts of tornadoes, damaging winds, and large hail on Days 1 and 2, and a combined severe weather risk on Day 3.

Thunderstorm (light green) – General or non-severe thunderstorms – Delineates, to the right of a line, where a 10% or greater probability of thunderstorms is forecast during the valid period.

Level 1-Marginal Risk (dark green) – An area of severe storms of either limited organization and longevity, or very low coverage and marginal intensity.

Level 2-Slight Risk (yellow) – An area of organized severe storms, which is not widespread in coverage with varying levels of intensity.

Level 5-High Risk (magenta) – An area where a severe weather outbreak is expected from either numerous intense and long-tracked tornadoes or a long-lived derecho-producing thunderstorm complex that produces hurricane-force wind gusts and widespread damage. This risk is reserved for when high confidence exists in widespread coverage of severe weather with embedded instances of extreme severe (i.e., violent tornadoes or very damaging convective wind events). 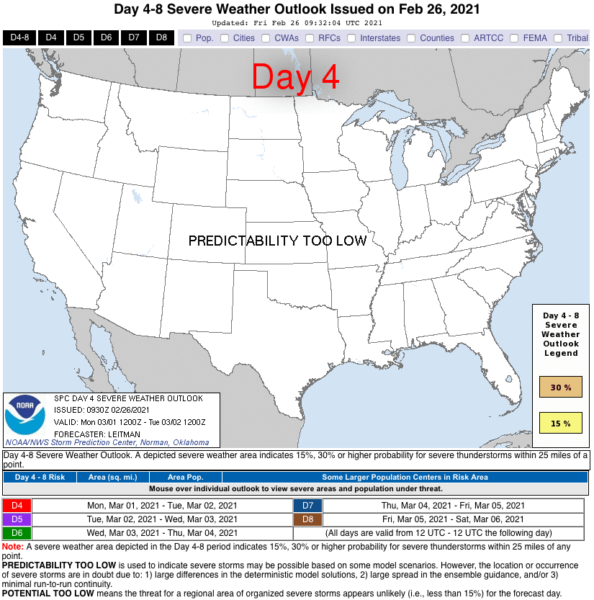 Two probabilistic thresholds of 15% and 30% can be forecast. Highlighted areas are equivalent to Level 2-Slight Risk (yellow) or Level 3-Enhanced Risk (orange) risks on the Day 1-3 Convective Outlooks. On rare occasions, the outlook text will begin with a headline for the possibility of a severe weather outbreak.

If no 15% areas are forecast, one of the following phrases will be used:

PREDICTABILITY TOO LOW: Used to indicate severe storms may be possible based on some model scenarios. However, the location or occurrence of severe storms is in doubt due to large spread in model guidance and/or minimal run-to-run continuity.

POTENTIAL TOO LOW: Used to indicate that 15% or greater severe probabilities appear highly unlikely on that day.

SPC severe weather outlooks forecast events from organized convection (e.g., supercells, squall lines, and multicell thunderstorm complexes), most capable of damage and injury from tornadoes, damaging winds, or large hail. Pulse-type thunderstorms, consisting primarily of solitary brief severe updrafts (often found in environments with weak vertical wind shear) are not considered organized. Convection of this type, may not be included in a risk area, unless forecaster confidence is high enough to draw a Level 1-Marginal Risk (dark green). Since almost any thunderstorm can produce a brief severe weather event, it doesn’t necessarily mean there is a conflict when a severe thunderstorm warning is issued by a local NWS office outside of an SPC severe weather risk area.

How many times have you experienced a tornado in your neighborhood?

How should you interpret probabilistic values?

The smallest values represent areas where the most uncertainty exists and correspondingly where the smallest expected coverage of storm reports exists. The higher the probabilities, the greater the perceived threat, and the greater the expected coverage of that hazard being forecast. The highest probabilities are generally reserved for more significant severe weather events and are used infrequently, if at all, during the year.

The most specific Convective Outlooks are those issued during the Day 1 period. Accordingly, SPC forecasters have the most information available to them to differentiate the threats of the individual severe weather hazards. During this period, the SPC produces probabilistic outlooks for each primary severe weather hazard (tornadoes, damaging wind, and large hail) separately. By producing separate forecasts for tornadoes, damaging wind, and large hail, the user is given substantially more information upon which to make decisions than in the categorical outlook. Users who are sensitive to one particular threat (e.g., car dealers and large hail) can make more informed decisions.

Since many of the specific details of severe weather forecasting can only be determined hours ahead of time, rather than several days, the severe weather probabilities for the Day 2 and Day 3 Convective Outlooks represent the probability of any severe weather hazard (large hail, damaging wind, or tornadoes) occurring. In addition, for tropical cyclones (hurricanes, tropical storms, or depressions), the outlooks on Day 2 and Day 3 allow a 5% total severe probability to be a Level 2-Slight Risk (yellow) because they are specifically tornado-driven.