Tonight you get a series of “quick-hitters” on the MWN Blog. I’ve got three topics for you:

We’ve been watching this event for a few days and wondering just how it might play out, as computer model data has kind of had some trouble with the potential for multiple rounds of storms, especially when the result of one round is likely to affect the next. Here’s how we think it will play out as of Wednesday evening.

There will be three rounds of weather that affect the larger Mid-South region. The first moves out of OK and across northern AR overnight and is likely to pass us by just to the north Thursday morning. A few showers could sneak into areas north of I-40 but the majority of us remain dry as temperatures only drop to the mid 60s by morning with muggy conditions expected. Here’s how the HRRR thinks that round plays out:

Once it goes by to the north, instability increases markedly during the day with the potential for some filtered sunshine and definitely some good southerly flow of warm moist air. As temperatures top out in the mid 80s by early afternoon, you’ll be able to “feel” the setup for storms, which could be strong to severe as they move through. Between 3-6pm, areas south and west of Memphis will get the brunt of what should be a long squall line, but the metro will be on the northern end and could see some strong storms. This is where our Level 2 (Slight) Risk for severe weather comes from. Damaging wind will be the main threat, as well as lightning and downpours. Rain is likely to linger into the early evening. Again, I give you the evening HRRR model, as well as our severe weather infographic: 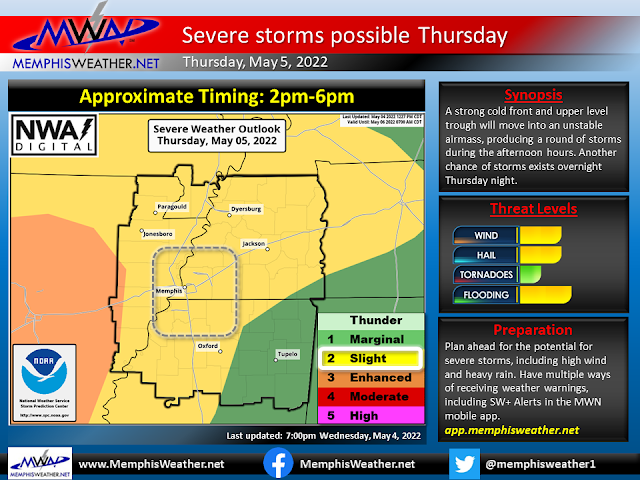 Finally, how much rain falls with the late afternoon batch will determine how much unstable air is left as the cold front itself arrives in the wee hours of Friday morning. The late evening hours should be pretty decent, but showers and probably a few thunderstorms will arrive in the “zero-dark-thirty” hours Friday morning, which could wake the dog or small children. I don’t expect these to have much in the way of a bite, but maybe a little bark! By the time the rest of us wake up Friday morning, rain should pretty much be gone. Once again, the HRRR model (though this one could vary some based on how much storm fuel round 2 leaves behind):

Enjoy some spring weather while you can!

In the wake of  Friday morning’s front, a beautiful Friday and Saturday are in store. Friday will be a bit breezy, but mainly dry with some departing clouds. Highs top out in the mid 70s – a few degrees below average. Friday night into Saturday morning will be mostly clear with temperatures in the 60s Friday evening and upper 50s by Saturday morning. Perfection! Expect lots of sunshine Saturday with light wind, low humidity, and highs topping out near 80. Sounds like a great day to visit the farmer’s market or get some yard work done! Another pleasant night is on tap Saturday night with lows near 60.

The heat is on!

We’ve had some warm days in the mid 80s recently, and you summer haters (or spring lovers?) have been heard. Yes, it’s been a bit sticky and warm, but mid 80s are not that unusual in early May despite being above average. But 90s?? No thanks! Unfortunately, there is high confidence that that is where we are headed to start next week.

The warm-up starts Sunday with low humidity and breezy south wind returning, resulting in temperatures rising quickly from 60 in the morning to the upper 80s by afternoon. And it only gets hotter from there. An atmospheric pattern called an “omega block” sets up and centers itself over the Mississippi/Ohio Valleys early next week, meaning anomalously high pressure overhead. That will squash all rain chances (and even cloud chances TBH), and sends the mercury soaring.

Expect high temperatures in the lower 90s Monday through Wednesday with lows near 70 or just above. South wind will also mean a measure of humidity to boot! Some models are even poking at mid 90s mid Wednesday, but I’m not quite ready to go that warm just yet. No matter, high temperature records will be in jeopardy. Monday’s is 92°,  while Tuesday and Wednesday the records are each at 90°. There’s a good chance those two get broken. For models to forecast record highs a week out tells us something about the strength of this particular high pressure system! Trends show a slight relaxing of temperatures towards the end of next week, but not a lot. If you have your sights set on the World Championship Barbecue Cooking Contest next week, plan accordingly! The grills won’t be the only things putting off some heat!