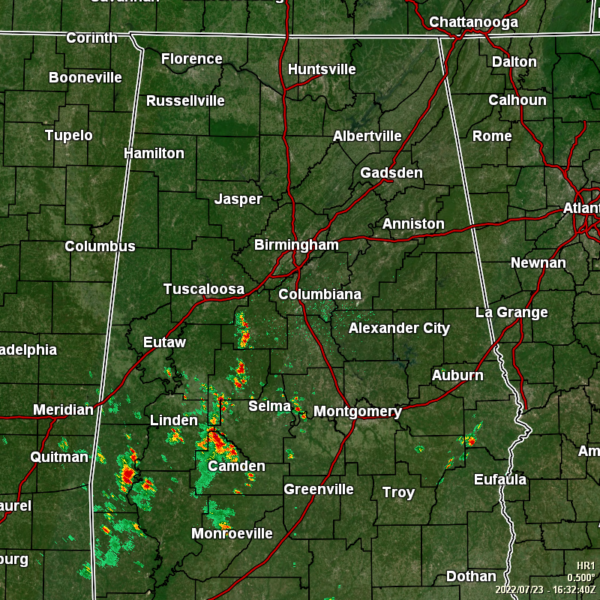 MIDDAY WEATHER CHECK: As of the 11 am roundup, temperatures are up in the 80s across the area as skies are partly to mostly sunny. We do have some showers and thunderstorms in-between the I-59/20 and I-65 corridors in the southern half of the area, along with a few showers over parts of Bullock and Russell counties. Alexander City and Sylacauga were tied as the cool spots at 81º. Montgomery was the hot spot at 89º. Birmingham was at 86º.

REST OF TODAY: Skies will eventually become partly to mostly cloudy across the area today, with scattered, mainly afternoon showers and thunderstorms possible. The better rain chances will be over the southern and southwestern parts of the area. Highs will be in the lower to mid 90s. Any shower activity will dissipate this evening and skies will be partly cloudy to mostly clear. Lows in the lower to mid 70s.

SUNDAY’S WEATHER: Sunday will be a mostly sunny, hot, and humid day, with a very small chance of an isolated shower or two. Highs will be in the lower to mid 90s. Some locations may have to go under a heat advisory as heat index values could top out at or just over 105º.

THE TROPICS: All is calm across the Gulf of Mexico, the Caribbean Sea, and the tropical Atlantic Ocean, and no new tropical systems are expected to form over the next five days.

ON THIS DAY IN WEATHER HISTORY: 1788 – A weather diary kept by George Washington recorded that the center of a hurricane passed directly over his Mount Vernon home. The hurricane crossed eastern North Carolina and Virginia before moving into the Central Appalachians. Norfolk, VA reported houses destroyed, trees uprooted, and crops leveled to the ground.