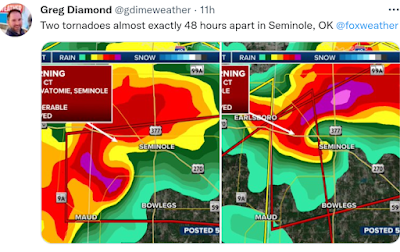 The town of Seminole in Oklahoma was hit 48 hours apart by two different tornadoes. The signatures shown above show how similar these events were and basically how dangerous a “stuck pattern” can be especially out on the plains where storm chasers chase tornadoes and tornadoes rip apart people’s lives. 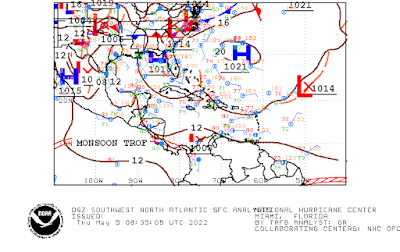 They tell a story in one image.

Note the L over the Oklahoma Panhandle.

Then the twin Lows over the Carolinas.

Then the HUGE High Pressure system….

… part anchored over the SE.

This pattern has been rinse, repeat for days.

Stuck patterns happen often this time of year. Mike, from Spaghetti Models, used to call some stuck huge, upper level low over the SE a cinnabun or something too fattening for me to work hard to remember exactly. Like a huge cinnamon roll that told hold over the SE and it wouldn’t budge. This is a common set up for this time of year. This year is similar to last year in ways. I’ll add in this is the 3rd year that certain patterns have repeated.  We can think on the La Nina that doesn’t want to leave despite early predictions that it would but it seems stuck like extra weight from too many cinnamon rolls with coffee for breakfast! 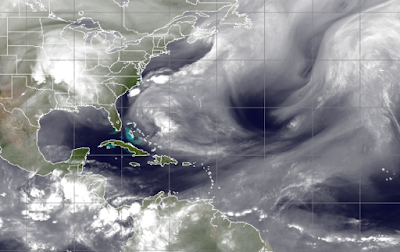 Now we have the satellite image shown aboave and you can see a huge mess over Oklahoma, Kansas and nearby states. Amorphous like in ways and storm cells from each impulse slide over the same area of Oklahoma where dry lines set up and storm chasers jump into action and sirens scream tornado warnings and residents look up and think “not again” before jumping into whatever shelter they can find.  Seminole Oklahoma got slammed twice in 48 hours from this stuck pattern.  On a lesser extent North Carolina, to the East of Oklahoma received fast moving storms multiple times this past week that created localized problems not as bad as Seminole saw but  when huge trees crash down on your home it’s still huge problems for the home owner.

Yesterday we were in Charlotte as my husband had business there and I had some shopping business at Southpark Mall, the closest thing I get in NC to a real Miami Mall. Seriously I enjoy short trips to Charlotte as it’s a decent easy drive from Raleigh and to be honest Charlotte is a bit more fun in various ways. Often we take the back roads home depending on traffic and yesterday was one of those days. Charlotte, like Miami, has a long traffic hour and you think if you leave by 4 you’ll miss it but you still get stuck in a traffic pattern somewhere trying to get out onto the highway. His last client told him he got stuck in traffic and it was getting worse so after seeing red veins of clogged highways with drivers stuck in traffic we took the back roads home. Beautiful drive, some nice storm clouds but nothing much to write home about.

When I got home and put on the news the local weather showed images of trees that fell in Charlotte during the storm that created the stuck traffic pattern and discussion on multiple hail reports as well as a huge traffic jam near the airport. Infact many places across the US had hail yesterday including Miami.

So why have I used the word STUCK numerous times in this blog? You must have noticed I’ve been a bit redundant here with that word that is the best word to explain this pattern. What breaks this pattern you ask? The approach of the Hurricane Season. Yes, a few strong cold fronts may still fire up and dip down some bringing us cooler weather for a few days taking a bite out of the stubborn High, but each cool front dissipates faster than the last. Cool temperatures are confined mostly to cool nights and the daily high temperature hovers in the 80s. Spring gives way to Summer and as we approach late May we see signs of life in the tropics.

Often before real tropical weather begins we get a brief Subtropical Storm in the Gulf of Mexico or off the East Coast. Water temperatures are not warm yet, I was at Wrightsville Beach on Sunday and trust me it wasn’t warm at all, but further South closer to the Bahamas we sometimes have a breeding ground for a Subtropical sytem that develops when remnants from storm systems that travel East bound across the top boundary of the anchored, stuck High over the SE and after splashing down in the Atlantic they sometimes hook up with an area that seems to want to spin on model imagery but needs something to give spark to it to bring it to life. Sometimes this happens in a set up such as this and sometimes it does not. Models have latched onto “something” kind of amorphous off the SE coast early next week, a strong circulation center but not much weather caught up with it.  I know long rambling sentences but it correlates with the long, stuck pattern creating the same weather day after day.

This is why you will will hear many meteorologists hint at something subtropical forming next week. Partly because of the pattern and partly because the models keep hinting at one forming.

We aren’t there yet, but to be honest until we have strong systems moving up from the tropics we will be stuck in this pattern that has of late created dangerous tornadoes destroying and damaging small towns in Oklahoma and then creating traffic jams, accidents and downed trees further East in North Carolina. First we will have model discusison, then possibly Invests and then we may get a Subtropical Storm forming.

So buckle up and be happy you have power and can sit in your home planning what you need to buy to prepare for the Hurricane Season. You can’t stop Hurricane Season anymore than you can stop a train (unless you’re Superman) or a Supercell with dangling tornadoes from ripping up small towns on the Plains.

Next we will discuss why La Nina seems to be stuck. There was so much discussion over the last year on how La Nina was showing signs of leaving and we were moving towards a more neutral pattern. But, La Nina seems stuck like glue and if you live in areas impacted last year along the Gulf of Mexico or parts of Florida and areas along the East Coast now is the time for you to make a list and go shopping for Hurricane Supplies. It’s really that simple.

It would be very sad to see Louisiana get slammed again this year as they did the last few years but it is totally possible with the current pattern.

Trivia of the day… the word Seminole isn’t only about Florida but also a town in Oklahoma that needs help putting life back together again.

As always any time of year a good link to keep to give charity is www.redcross.org