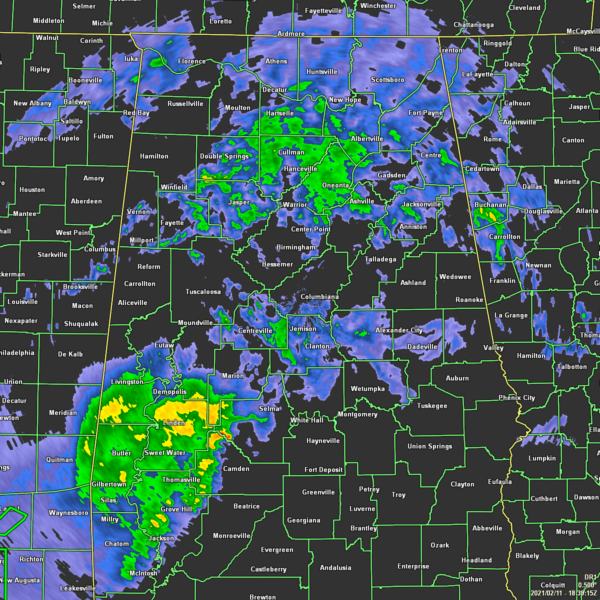 A LOOK OUTSIDE AT 12:45 PM
Scattered to numerous showers continue to move across Central Alabama at this time, making the midday dreary and miserable… especially if you have to be outdoors or on the roadways. Temperatures as of the 12:00 pm Roundup were in the lower 40s to the upper 60s across the area. Haleyville was the cold spot at 40 degrees while it was 69 degrees in the warm spots of Troy and Montgomery. Birmingham was at 61 degrees.

REST OF TODAY AND INTO FRIDAY
Showers and a few claps of thunder will continue at times throughout the remainder of your Thursday and into the late-night hours tonight. It looks like we’ll get a small reprieve from the rainfall during the overnight hours, but shower activity moves back in from the south and southwest before the midday hour on Friday. After that, rain will be likely through all the second half of your Friday.

THE CENTRAL ALABAMA WEEKEND
A surface low will be pushing across the Gulf of Mexico and will eventually move up into the southern parts of the area on Saturday that will keep showers in the forecast at least through midday then chances drop off steadily through the rest of the day. Highs will be in the upper 30s to the lower 60s across the area.

Another surface low forms out over the Gulf of Mexico that will move up into the Deep South on Sunday that will bring a chance of showers to the eastern and southeastern parts of Central Alabama on much of Sunday. As those push out by late evening, more showers will begin to push into the area from the west that will continue through a decent portion of the late-night and overnight hours. Highs will be in the upper 30s to the upper 50s.

STILL QUESTIONABLE ABOUT MONDAY’S WEATHER
Models are still not agreeing on what we will see on Monday and into Monday night. The GFS is still painting the potential for freezing rain during the latter half of the day mainly along and north of the I-59 corridor. The European model continues to show warmer temperatures and nearly all rain for the area. It is still too early to nail down the forecast, but we’ll be able to focus on it more after we get through with today’s weather. There will be a large thermal gradient across Central Alabama as temperatures look to range from the lower 30s in the northwest to the lower 60s in the southeast.

HIGH PRESSURE TAKES OVER THROUGH MIDWEEK
High pressure looks to move into the area by midday on Tuesday and hang around with us through much of Wednesday. We’ll have a mix of sun and clouds on each day with highs reaching the lower 30s to the upper 40s on Tuesday and into the mid-40s to the lower 60s on Wednesday. A few showers may move into the south and southwestern parts of the area before midnight on Wednesday night ahead of the next system.

VOODOO LAND FOR THE END OF NEXT WEEK
Next Thursday looks to be a stormy day, and we may have to deal with some strong storms as well. A deepening surface low will move into the northern parts of Central Alabama or into the North Alabama that will bring rain and thunderstorms to the area. We are already seeing signs that we will have some instability mixed in with decent shear values. It’s way too early for specifics or to even forecast severe weather at this point, but this will need to be a system that we need to keep our eyes on throughout the rest of the week and weekend. Thursday’s highs will be in the upper 60s to the mid-70s. Next Friday will be a drier and much cooler day with clearing skies and highs in the upper 30s to the mid-40s. Remember, this is out there past seven days. At this point, this is just an outlook for these two days… not an official forecast.

SEVERE WEATHER AWARENESS WEEK: FEB 21-26
Alabama is no stranger to severe weather, including tornadoes. They can happen any month of the year and any time, day or night. However, our primary severe weather season is considered to be from November to May. Last year, 73 tornadoes touched down across Alabama. Unfortunately, four lives were lost, and over a dozen were injured. Advanced planning and increased awareness will help residents of Alabama survive these deadly storms. Throughout the week, we’ll have special posts and infographics on the blog about severe weather awareness and safety.