SCATTERED STORMS LATER TODAY: The sky is mostly fair across Alabama early this morning with temperatures in the 70s; we rise into the 90s again today with a partly sunny sky. During the heat of the day, random, scattered storms will likely form over the southern 2/3 of the state, and those could pack a punch. SPC maintains a “slight risk” (level 2/5) of severe thunderstorms today mainly for areas south of I-59. 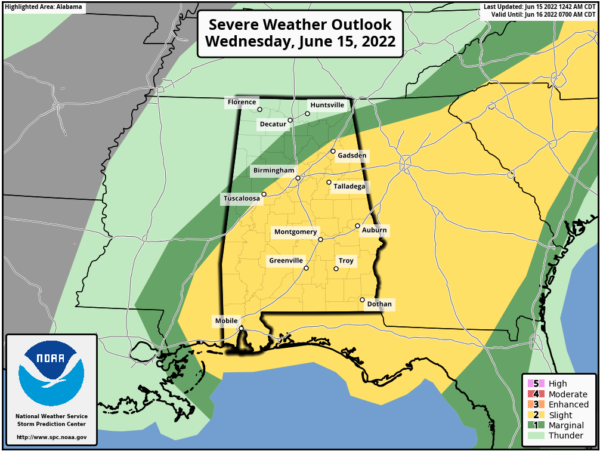 The main threat from heavier storms will come from strong straight line winds. Of course, all summer storms produce a large amount of cloud to ground lighting, and are efficient rain producers. Understand it won’t rain everywhere today; odds of any one spot seeing a storm is 30-40 percent south of I-59, and 10-20 percent over the northern third of the state.

TOMORROW THROUGH THE WEEKEND: We will keep some risk of isolated afternoon and evening storms in the forecast tomorrow and Friday, but most places will be hot and dry with highs in the mid 90s. Then, a drier airmass drops into the state Friday night, and the weekend will feature sunny days, lower humidity levels, and cooler nights. Some of the cooler spots across North Alabama could reach the 50s early Sunday morning… highs will be mostly in the low 90s.

NEXT WEEK: Moisture levels creep up again, and heat levels remain elevated. Highs will be mostly in the 90s, lows in the 70s, and any afternoon and evening showers and thunderstorms should remain fairly scarce under the upper high. Temperatures will likely remain above average through the rest of June… See the Weather Xtreme video for maps, graphics, and more details. 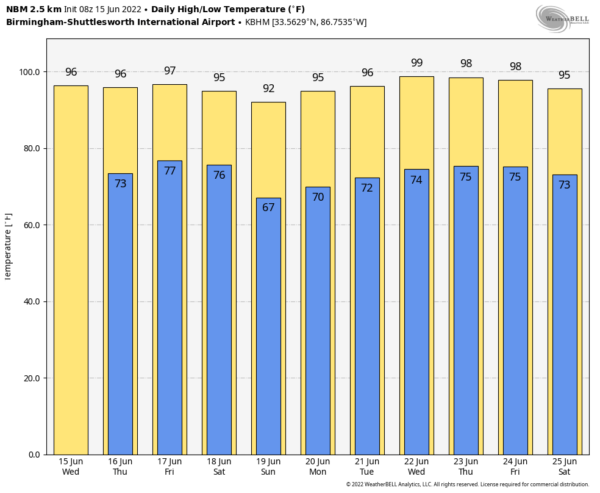 TROPICS: Satellite imagery and surface observations indicate that a small area of low pressure is located over the far southwestern Caribbean Sea near the east coast of Nicaragua. This system is currently accompanied by disorganized showers and thunderstorms. Development of this system is possible while it drifts northwestward near the coasts of Nicaragua and Honduras, and it could become a tropical depression later this week if the disturbance remains over water. An Air Force Reserve Hurricane Hunter aircraft is scheduled to investigate this system later today, if necessary. Regardless of development, the low could produce periods of heavy rainfall across portions of eastern Nicaragua and eastern Honduras through late this week.

NHC gives the system a 40 percent chance of developing over the next five days. If anything does form here, it will stay far south of the North/Central Gulf Coast (places like Gulf Shores, Destin, and Panama City Beach). The rest of the Atlantic basin is very quiet.

HEAT PARADE: Here are some highs across Alabama yesterday…

ON THIS DATE IN 1991: The second largest volcanic eruption of the 20th Century began as Mt. Pinatubo injected 15 to 30 million tons of sulfur dioxide 100,000 feet into the atmosphere. 343 people were killed in the Philippines as a result of the eruptions, and 200,000 were left homeless. Material from the explosion would spread around the globe, leading to climate changes worldwide as the sun’s energy was blocked out and global temperatures cooled by as much as one degree Fahrenheit. 1992 was globally one of the coldest since the 1970s.