DRY DAY FOR NORTH ALABAMA: Drier air has moved down into the northern third of the state today… the day should be dry there with a good supply of sunshine along with a high in the upper 80s. We will mention the chance of a few random, scattered showers and storms over the central and southern counties this afternoon and tonight, where moisture levels are higher.

REST OF THE WEEK: Not much change tomorrow, but moisture creeps northward Wednesday, and we will mention scattered showers and storms in the forecast each day Wednesday through Friday. Best chance of shower or storm will come from about 2:00 until 10:00 p.m. each day, otherwise the sky will be partly sunny with a high in the 88-92 degree range. Higher coverage of showers and storms will be near the Gulf Coast.

We do note SPC has defined a “marginal risk” (level 1/5) for parts of North/Central Alabama Wednesday… a few storms could produce strong winds. 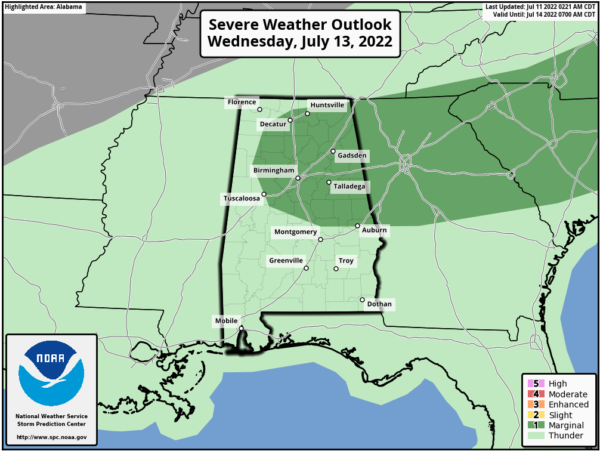 THE ALABAMA WEEKEND: We will stick with a persistence forecast. Pretty routine summer weather with partly sunny days, fair nights, and a few showers and storms around during the afternoon and evening hours. Afternoon highs not too far from 90 degrees as the core of the heat across the nation remains west of Alabama.

NEXT WEEK: The upper high will begin to nose in here, meaning slightly higher heat levels with highs in the 90-95 degree range most days. And, the usual risk of “scattered, mostly afternoon and evening showers and thunderstorms”. See the daily Weather Briefing video for maps, graphics, and more details. 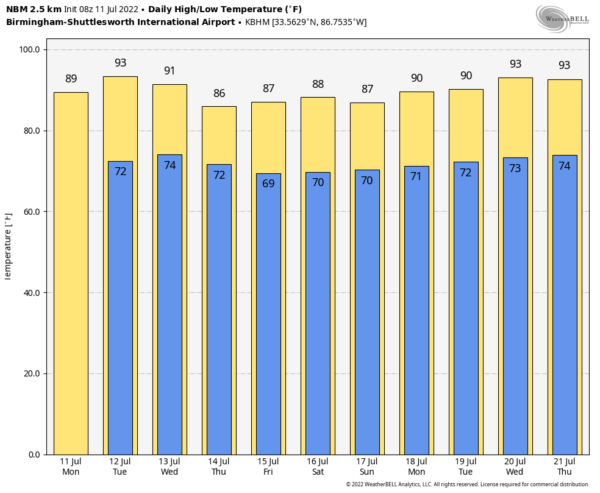 TROPICS: A surface trough of low pressure is expected to form in a couple of days over the northern Gulf of Mexico, partially related to a decaying frontal boundary currently located over the southeastern United States. Some slow development of this system is possible if it remains offshore during the middle and latter part of the week while it moves little. Regardless of development, heavy rains will be possible along portions of the northern Gulf coast from Louisiana to the Florida Panhandle over the next several days.

NHC gives the system a 30 percent chance of a becoming a tropical depression or storm over the next five days. 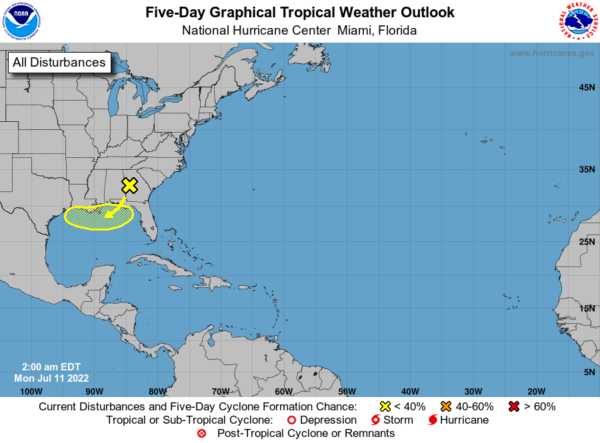 If you have a beach trip planned this week (anywhere from Gulf Shores over to Panama City Beach), you will see some sun. But, just know that the coverage of showers and storms will be somewhat enhanced this week by this feature in the northern Gulf.

ON THIS DATE IN 1936: From July 5-17 in Canada, temperatures exceeding 111 degrees in Manitoba and Ontario claimed 1,180 lives (mostly the elderly and infants) during the most prolonged, deadliest heat wave on record there. Four hundred of these deaths were caused by people who drowned seeking refuge from the heat. In fact, the heat was so intense that steel rail lines and bridge girders twisted, sidewalks buckled, crops wilted and fruit baked on trees. Some record temperatures include; 112 degrees at St. Albans and Emerson, Manitoba, 111 at Brandon, Manitoba, 108 at Atikokan, Ontario, and Winnipeg, Manitoba.