METEOROLOGICAL SUMMER BEGINS: Today is the first day of “meteorological summer”; we consider summer to run from June 1 through August 31. In terms of astronomy, summer begins on the date of the summer solstice, June 21, our “longest day” of the year in terms of the amount of daylight. It will feel like summer today with a high in the low 90s along with a partly to mostly sunny sky. Like recent days, a few isolated showers could pop up this afternoon, but they should be few and far between.

A surface front will bring a higher coverage of showers and storms tomorrow afternoon and tomorrow night. We can’t promise rain for everyone, but the chance of any one spot seeing a shower or thunderstorm is 50-60 percent, and some of the storms could be strong. SPC maintains a “marginal risk” (level 1/5) of severe thunderstorms for areas along and north of I-59, where some hail and strong winds are possible. 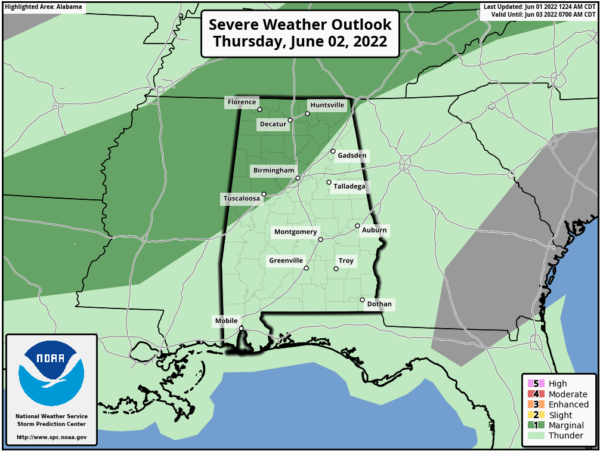 FRIDAY AND THE WEEKEND: Drier air drops into the state Friday; the day will be mostly sunny and less humid with a high in the mid 80s. Cooler spots will dip into the 50s early Saturday morning… then look for a good supply of sunshine over the weekend with highs between 85 and 90 degrees.

NEXT WEEK: For now the week looks mostly dry; there could be a day or two with isolated showers, but an upper ridge will deflect most of the major rain producing systems away from the state. Afternoon highs will be at or just over 90 degrees… See the Weather Xtreme video for maps, graphics, and more details. 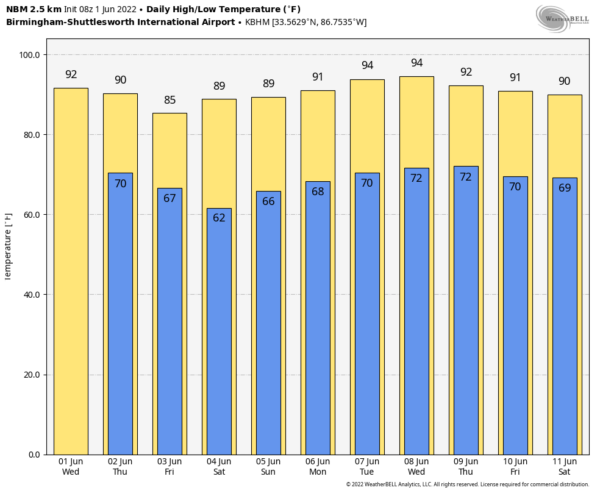 TROPICS: A large area of disturbed weather located near the Yucatan Peninsula (the “ghost” of former eastern Pacific Hurricane Agatha) is interacting with an upper-level trough over the Gulf of Mexico and producing a broad region of disorganized showers and thunderstorms. Environmental conditions appear marginally conducive for gradual development, and this system is likely to become a tropical depression by the weekend as it moves northeastward into the northwestern Caribbean Sea, southeastern Gulf of Mexico, and crosses the Florida Peninsula. Regardless of development, locally heavy rainfall is likely across portions of southeastern Mexico, the Yucatan Peninsula, Guatemala, and Belize during the next couple of days, spreading across western Cuba, southern Florida, and the Florida Keys on Friday and Saturday.

The heaviest rain in Florida most likely will be south of I-4 Friday and Saturday; amounts of 5-8 inches are likely. Flooding is the main concern.

All of this will be south of the Central Gulf Coast (Gulf Shores to Panama City Beach), but it could bring a higher rip current danger by Friday. 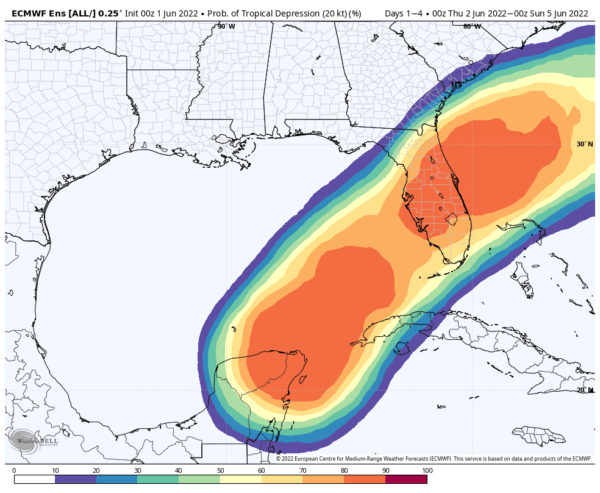 We also note a weak surface trough in the Atlantic is located around 200 miles northeast of the central Bahamas is producing disorganized shower activity as it interacts with an upper-level trough. Surface pressures are currently high across the area, and significant development of this system appears unlikely as it moves generally east-northeastward over the next several days away from the southeastern United States.

ON THIS DATE IN 1903: During the early afternoon, one of the most destructive tornadoes in the history of Georgia up to this time, struck the outskirts of Gainesville. The track of the storm was about four miles in length and varied between 100 to 200 feet in width. The tornado touched down about one mile southwest of Gainesville, striking a large cotton mill at 12:45 pm, Eastern Time, just 10 minutes after 750 employees filed into the great structure from dinner. On the top floor of the mill were employed 250 children, and it was here that the greatest loss of life occurred.