RADAR CHECK: Most of Alabama is dry this afternoon with a mostly sunny sky, but a few isolated showers have popped up, including one just west of Birmingham. Temperatures are mostly in the 87-91 degree range… the isolated showers will end this evening, and tonight will be mostly fair with a low close to 70 degrees.

Scattered showers and storms will form across the state tomorrow afternoon ahead of a surface front; SPC maintains a “marginal risk” (level 1/5) of severe thunderstorms for areas north of a line from York to Alabaster to Piedmont. Heavier storms will be capable of producing some hail and strong gusty winds during the afternoon and evening hours over the northern half of Alabama. 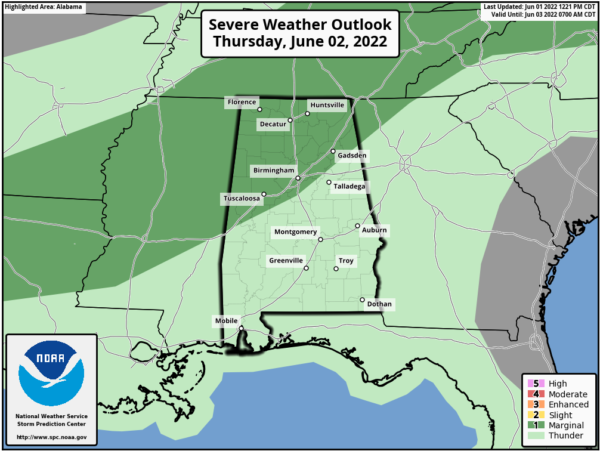 Showers will end late tomorrow night, and Friday will be a mostly sunny day with lower humidity values along with a high in the 82-86 degree range. Very pleasant for June.

THE ALABAMA WEEKEND: Sunny weather continues Saturday with a high in the mid to upper 80s. Then, on Sunday, we will introduce the chance of a few isolated showers as moisture levels begin to rise, but most places will be dry with a partly sunny sky. The high Sunday will be somewhere between 86 and 90 degrees.

NEXT WEEK: There will be enough moisture for a few widely scattered afternoon and evening showers or storms on a few days, but the overall weather pattern looks quiet as the main storm track remains to the north. Highs will be in the upper 80s and low 90s… see the Weather Xtreme video for maps, graphics, and more details. 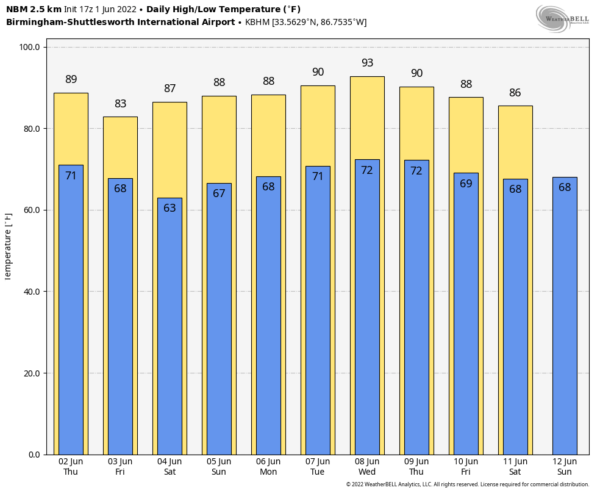 TROPICS: A broad area of low pressure located near the east coast of the Yucatan Peninsula (the ghost of former eastern Pacific Hurricane Agatha) is producing a large area of disorganized showers and thunderstorms over the northwestern Caribbean Sea and Yucatan Peninsula. Despite strong upper-level winds, gradual development is forecast and this system is likely to become a tropical depression while it moves slowly northeastward over the northwestern Caribbean Sea and southeastern Gulf of Mexico during the next day or two. Regardless of development, locally heavy rainfall is likely across portions of the Yucatan Peninsula during the next day or so, spreading across western Cuba, South Florida, and the Florida Keys on Friday and Saturday.

NHC gives the system an 80 percent chance of becoming a tropical depression by Friday, but the strong winds aloft will prevent the system from being much more than a big rain producer. It will not impact the Central Gulf Coast (Gulf Shores to Panama City Beach).

Also, in the Atlantic, a weak surface trough located about 150 miles northeast of the northwest Bahamas is producing disorganized shower activity. Surface pressures are currently high across the area, and significant development of this system appears unlikely as it moves generally east-northeastward over the next several days away from the southeastern United States. 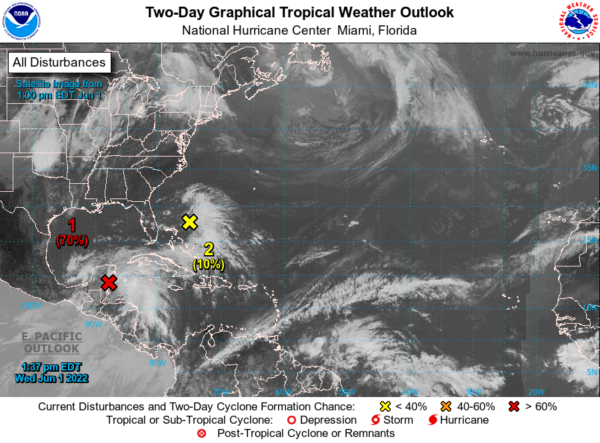 ON THIS DATE IN 1903: During the early afternoon, one of the most destructive tornadoes in the history of Georgia up to this time, struck the outskirts of Gainesville. The track of the storm was about four miles in length and varied between 100 to 200 feet in width. The tornado touched down about one mile southwest of Gainesville, striking a large cotton mill at 12:45 pm, Eastern Time, just 10 minutes after 750 employees filed into the great structure from dinner. On the top floor of the mill were employed 250 children, and it was here that the greatest loss of life occurred.