I’ve been keeping a close eye on Monday, January 11, for several days as the calls for “more than snow flurries” increase (yep, I hear you even if there’s nothing I can do about it!). The overall pattern is somewhat intriguing given a generally favorable track for low pressure across the southern Gulf Coast states and cold air in place.

So with that backdrop, let’s look at Monday in more depth. (Apologies to those who don’t care about details. You can skip ahead to The Bottom Line below.)
A couple of ingredients are present for the potential for snow: high pressure to our north providing cold air and low pressure tracking by to our south. However, if we look at this morning’s GFS model showing the surface features (below), two issues are evident: the responsible low pressure system is A) relatively weak and  B) too far south, for ideal snow-making in our area. If you look at the blue “blob” that moves across the northern Gulf of Mexico (Sunday through Tuesday morning in this loop), it is fairly subtle and it would be positioned moving across LA into southern MS and AL.

The other main ingredient is, of course, available moisture. A favorable setup of cold air and a surface low is all for naught if there is no moisture to fall! Therein lies the other conundrum… seems we could use some more of it. The loop below shows this morning’s 3km NAM model precipitable water anomaly, or the departure from normal of total atmospheric moisture, from Sunday evening to Monday evening. We need more moisture than a typical January day (when the atmosphere is pretty dry) to produce a decent snowfall. You’ll notice the greens (above average moisture) stay to our south. This model actually has a bit more moisture than the GFS and European models do. In other words, not ideal.

So given the track of the weak low being too far south and the available moisture also shunted to our south, you might deduce that the best chances for decent precipitation (snow if it is cold enough) are to our south. And in that case, you would be right. But that doesn’t necessarily mean we are left high and dry. What does the model guidance say about actual precipitation?

So let’s get into what the various guidance actually depicts as far as snow is concerned. I’ll start with a caveat: any precipitation that falls is likely to be snow from onset (early morning Monday) through most of the event, which appears to be mid-day or early afternoon, based on temperature profiles. The temperatures support snow over rain until at least mid-day. We could see some very light rain in the afternoon if there is still precipitation falling.
Starting with the 3km NAM model, which is the “wettest” and most bullish, it drops anywhere from half inch to a little over an inch and a half across the metro (red star on each image, which are all courtesy of WeatherBell). Also worth noting that much of that falls in the afternoon, which I believe is not likely. (Note though, the swath of snow that this system produces as that low moves off the TX/LA coastline, even if totals are exaggerated!) 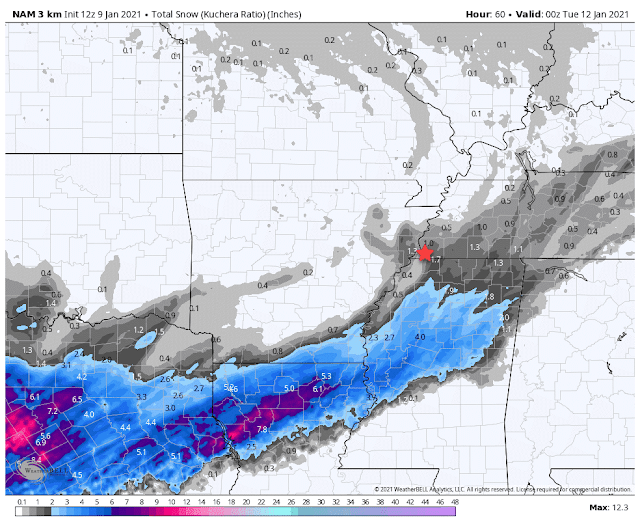 Next, the Saturday morning run of the American-made GFS model. Again note the swath to our south, closer to the low and where there is more moisture. For the metro, a dusting to *maybe* half an inch. 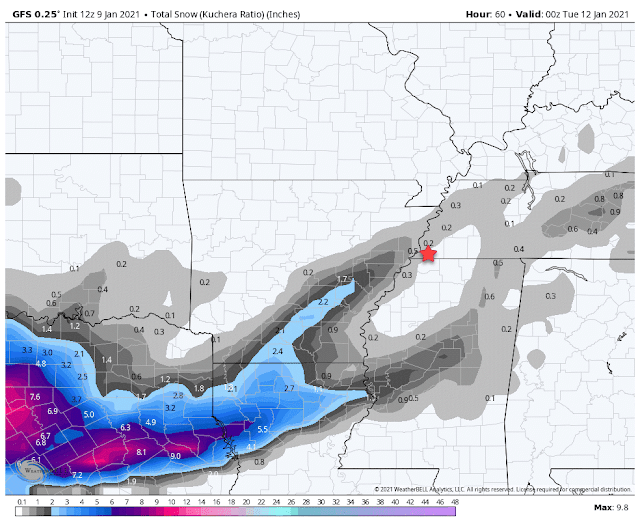 Next up, the overnight run of the European model. It’s pretty bullish to our south, but not much more than a dusting in the metro. 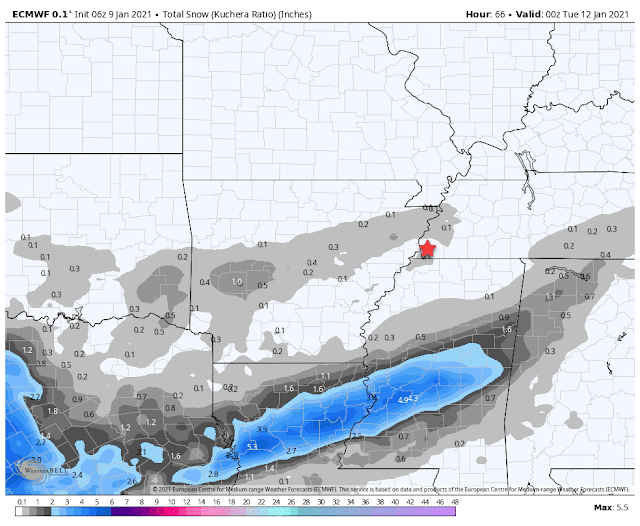 We also look at the NWS official forecast, the NDFD data, which shows roughly half an inch for the metro (a little less to the north and a little more to the south). 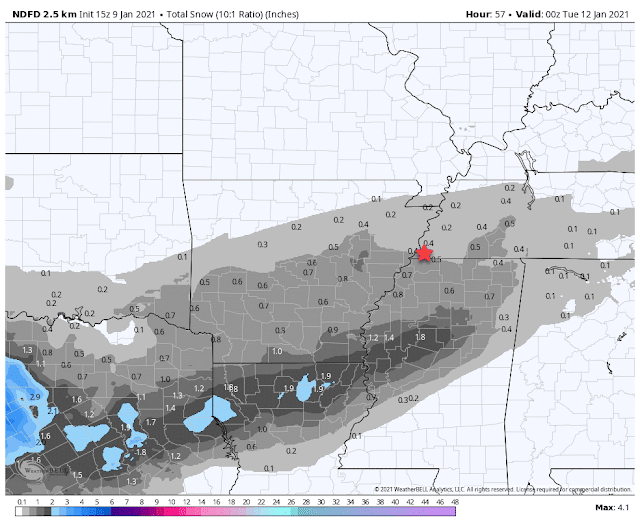 And finally, from the NWS Weather Prediction Center, the probability of an inch or more of snow falling between 6pm Sunday and 6pm Monday, which covers our event. It says our chance is less than 1 in 20 of that occurring. 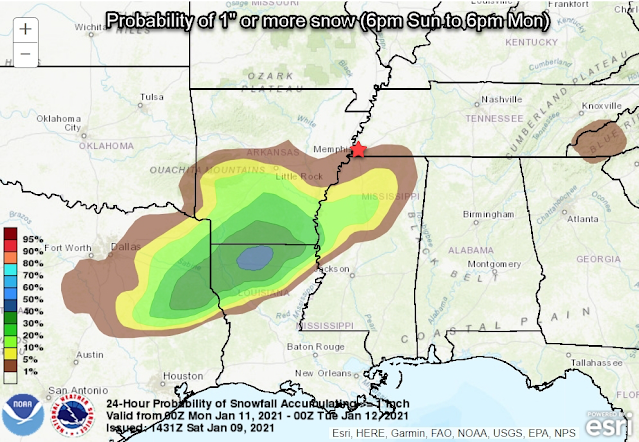 Unfortunately, if you are wanting a snow day, you may be disappointed. If you want “more than flurries,” it’s still possible. Our best guess right now looks like this:
When: Pre-dawn to early afternoon Monday
What: Light snow, possibly changing to light rain after lunch
How much: Likely 1/2″ or less
Boom forecast: An inch (1/10 chance of occurring)
Bust forecast: Flurries
Impacts to travel: Minimal
Bread/milk/TP scale: 1 of 5 (don’t bother)

With temperatures starting near 30 degrees and not much wind, minor issues are possible Monday morning if the snow starts quick enough or in an initial “burst” to lightly coat elevated roadways. By mid to late morning I expect no issues as temperatures creep above freezing. In the afternoon we should reach the upper 30s, perhaps with a little late day sun. There is a small chance of any leftover water Monday night to re-freeze in the typical areas, but we’re not talking about much water falling from the sky in our area. Currently, I’d be surprised if there are any issues.
After this passes, we’ll warm up into the 50s by midweek with intervals of sunshine and some clouds. Another round of cold air arrives to end the week but it looks to be dry when it does. Follow our social media channels, particularly Twitter, over the next couple of days for additional forecast information and guidance, as well as routine updates Monday.