Beautiful clear skies greet the morning accompanied by some breezy winds (I had a 27 mph gust at 4:43 am), but those winds will slow down and the rest of the day will be beautiful. The morning map (500 mb isobars/850 mb winds/temps) show the departing upper level low that came through yesterday exiting stage right, and the backside of it is bringing those breezy winds and cold dry air with it. 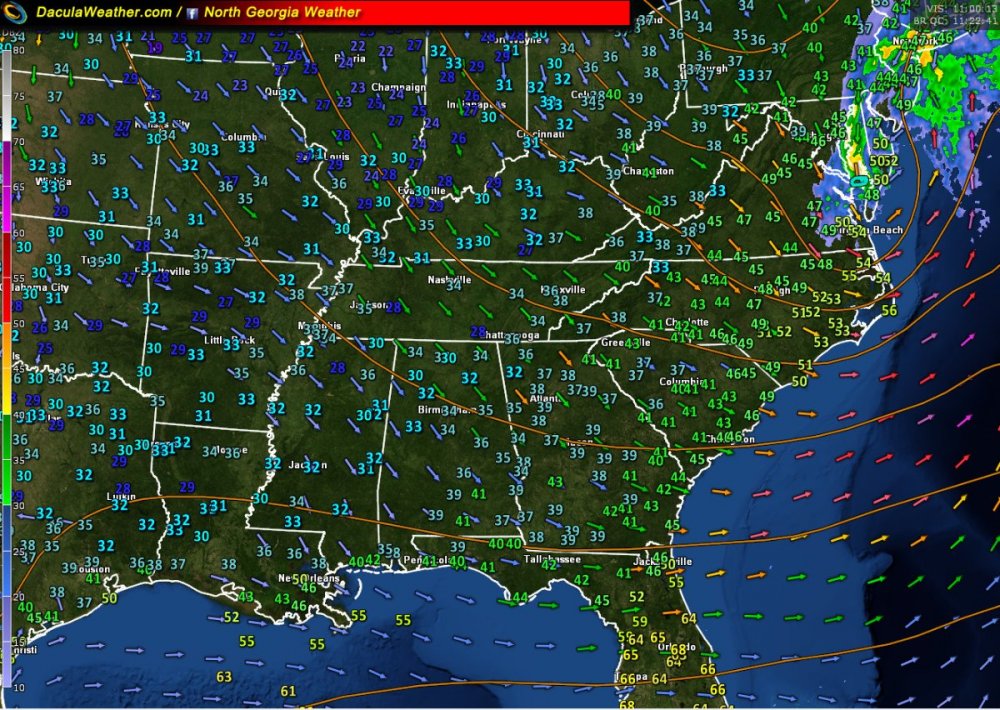 Those northwest winds will taper off as we go through the day today, and the surface wind gust on the NAM look like this through 7 am Sunday. Notice that the peaks and high ridges will see the highest winds.

Not much going on with the forecast right now, we are watching Sunday night/Monday morning for a little tiny bit of snow for the very far north mountains and 1 or 2 flakes a little further south, but that will probably be all we see out of it. It sounds like the NWS is more optimistic than I am by the way they talk, but the accumulation map speaks for itself. 🙂

The main concern for the long term will be Sunday Night through Monday as the models continue to struggle handling moisture and an upper level trough forecast to move across the Ern U.S and associated short waves within the longer wave trough. All in all, rain chances look to be on the low end and any precip amounts only light.

One thing we will need to monitor is the potential for a rain snow mix, most likely over the higher elevations of the mountains, but possibly briefly a little farther south. At this time, any accumulations would most likely be limited to the high elevations and be less than 1/2 inch.

Once this upper system passes, the rest of the long term, Tuesday through Friday, is expected to be dry.

For the most part, forecast temperatures are expected to run within about 2 to 8 degrees of normal, favoring above normal Sunday night then below normal Monday through Wednesday, then mostly above normal Thursday and Friday.

Looking at the models this morning, and they are definitely not excited about this chance. Because of that, the NWS NDFD map looks a little blank. Flizzard!!! 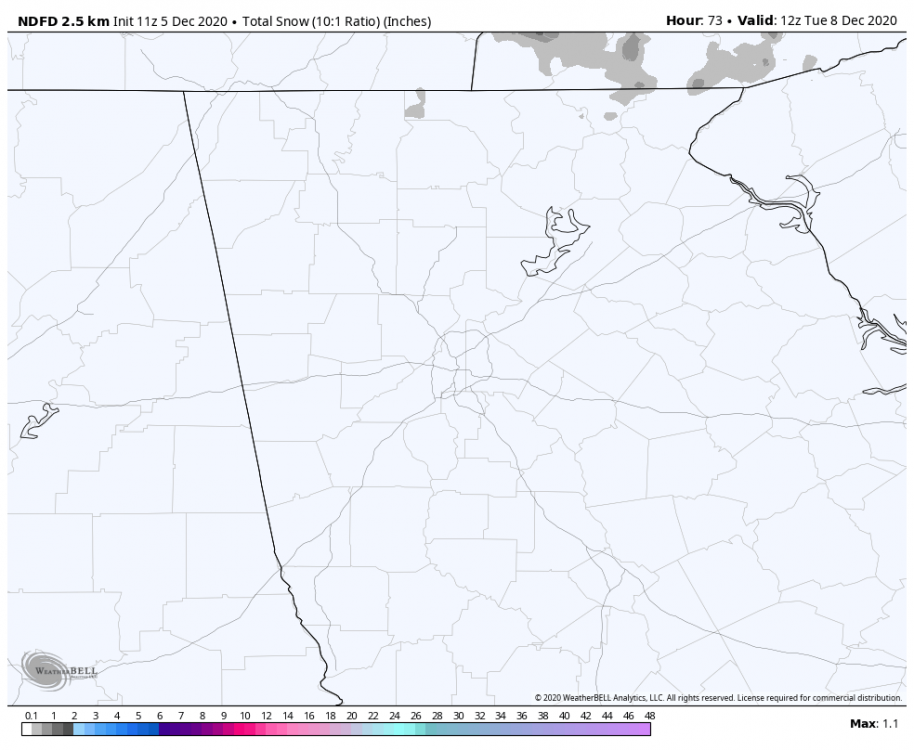 I took a look at the ensembles for Blairsville and the GFS is the most aggressive (LOL), if you call this aggressive 🙂 . One thing to note is that all three ensembles are picking up on something around the 14-16th of the month, and all three show a bump in snow around that time period. 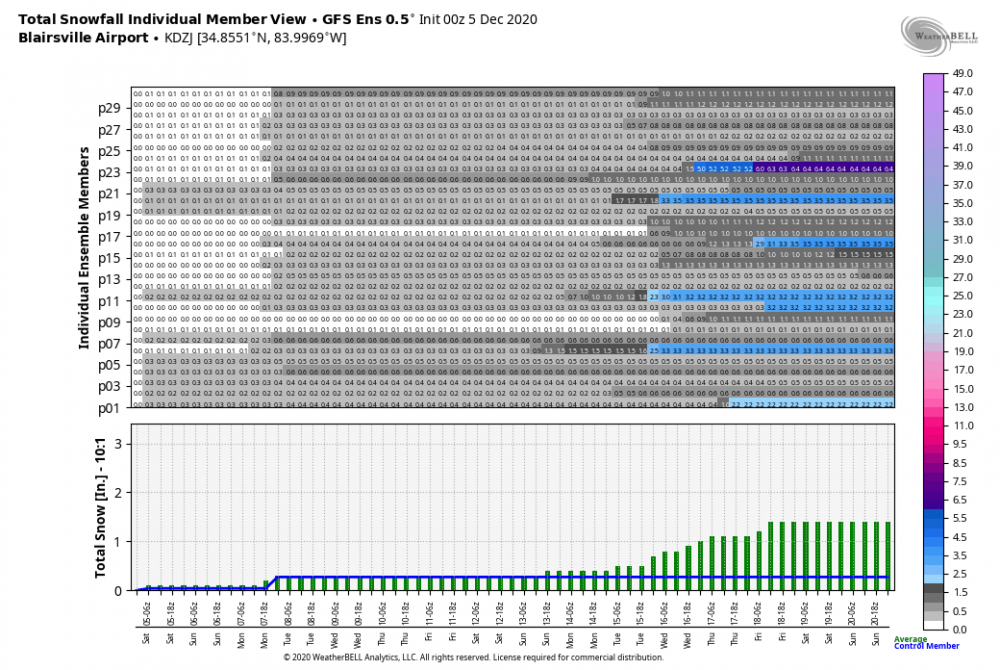 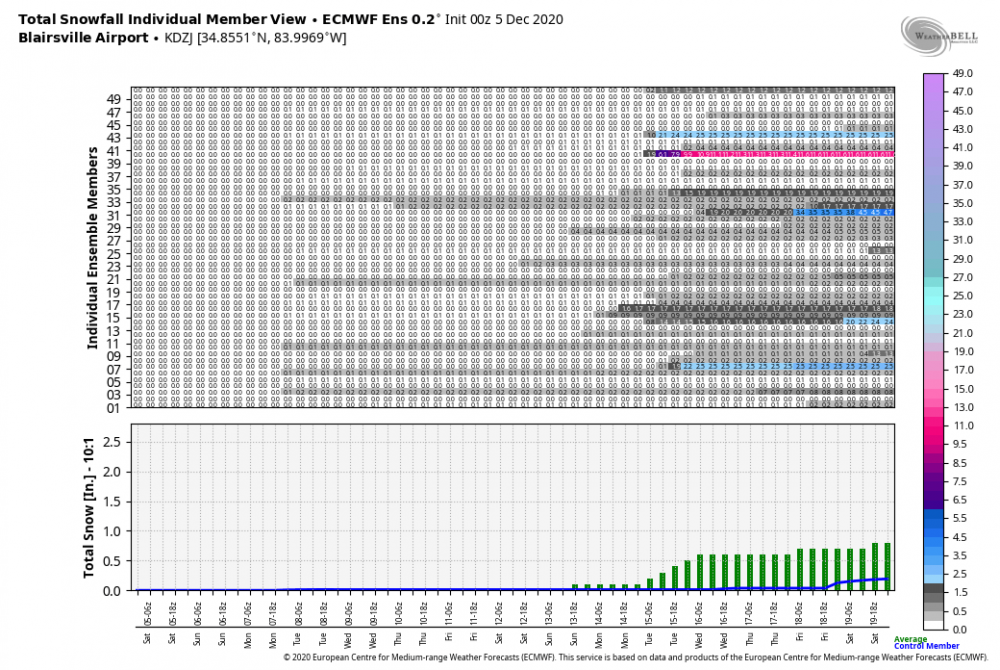 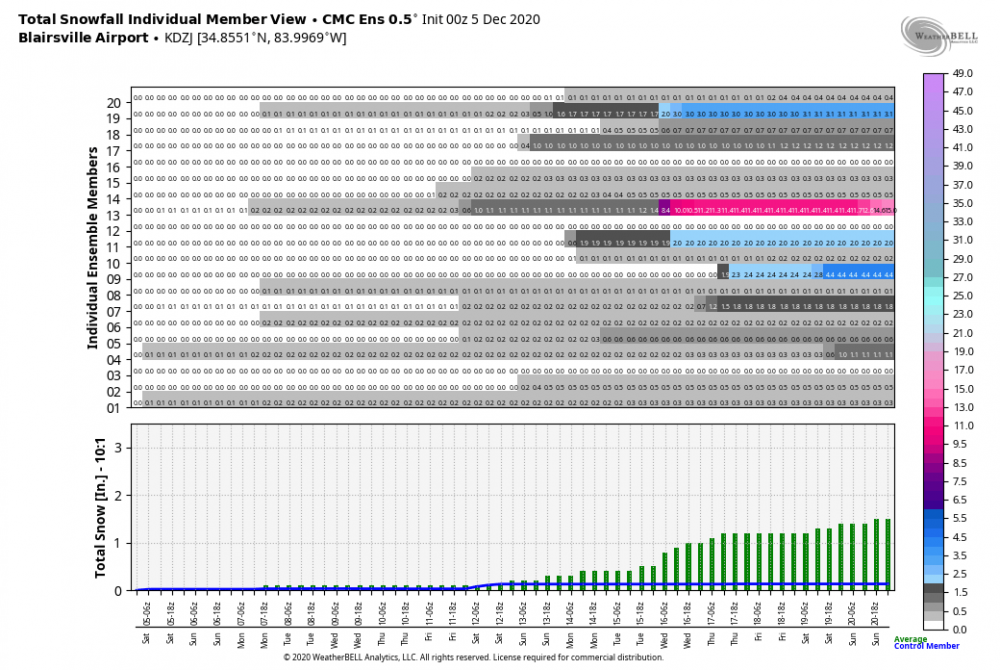 Here in Big Canoe, it’s cold this morning but it looks like most everyone stayed above freezing. You can see most stations have variable winds, mostly due to the fact they are in areas that are shielded from the direction the winds are coming from (NW). Mr. Smith’s station to the right of Oglethorpe as well as the station to the left, are showing the approximate wind direction correctly and it shows my wind out of the northeast but I just looked and since midnight, my winds have averaged a WSW wind direction that’s to the peak of Little McElroy blocking the winds from me. I sit about a 100 feet or so lower on the east side of the peak. Notice some people in the lower elevations have no wind at all. 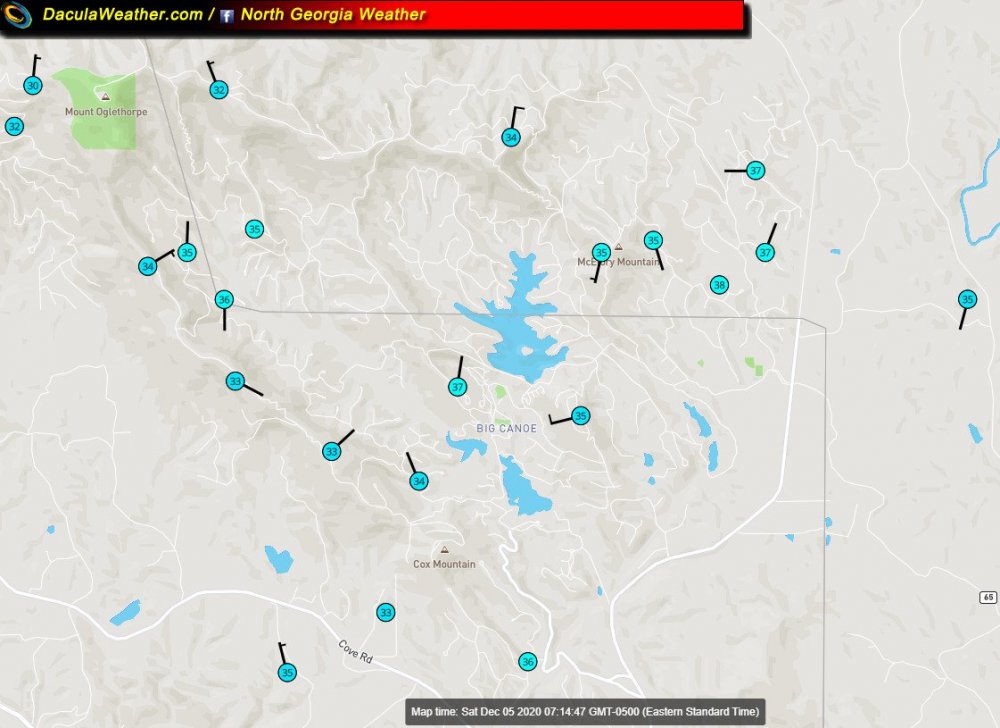 The unofficial Big Canoe Boat Parade (official activities canceled) will have awesome weather for December with temps in the mid to lower 40’s for the entire 2 hours starting at 6 pm. Yes, we have a Christmas boat parade on Lake Petit here in Big Canoe. ‘Tis the season! 🎅 So if you have plans on going, dress warmly and you’ll be fine!

Hope everyone has a great Saturday, and if you live here in Big Canoe, see you at the parade! 🙂

7:00 AM | *Winds pick up noticeably on Thursday as Arctic cold blast arrives from the northwest…winter storm threat early next week* — Perspecta Weather

7:00 AM | *Winds pick up noticeably on Thursday as Arctic cold blast arrives from the northwest…winter storm threat early next week* — Perspecta Weather