The complaints are starting to come in.

Where is the lowland snow that was “promised?”

This is a La Nina Year?  Right?  La Nina years tend to have above-normal snow at lower elevations west of the Cascade crest?   Right? 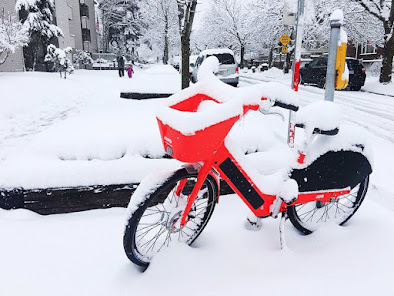 And the desperation is getting palpable.

We are running out of time. The probably of major snow events starts decreasing rapidly after the the third week of February. After, the first week of March, we simply don’t get major lowland snow events.

It is true we are in a La Nina year.  The latest sea surface temperatures for the central  tropical Pacific show it (see below).   Nino3.4 is an area in the tropical Pacific that we use as an index.  Blue colors indicate cooler than normal, which indicates La Nina.

It is also true that that typically we get more lowland snow during La Nina years, something described in several NOAA and research reports (including some I have worked on).  Here is a sample, showing more snow than normal (blue color) for La Nina years on average. 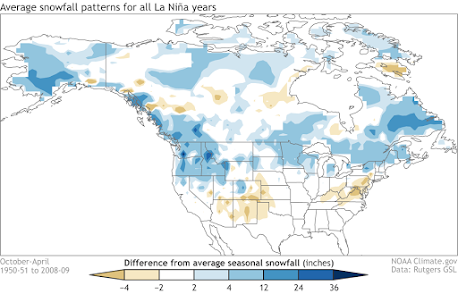 But there are no guarantees….this is like weighing some dice.  You might get heads more often, but occasionally you will still get tails.  And nearly all studies show the impacts of La Nina on our region are mainly observed AFTER January 1.

What Has Happened so Far?

For much of January, the atmosphere over the eastern Pacific has not been playing by the typical La Nina playbook.    The typical upper level (500 hPa, about 18,000 ft) pattern during La Nina years is shown below.  More exactly, this figure shows the difference of the La  Nina upper level pattern compared to normal (known as the anomaly from normal).

La Nina years tend to have enhanced high pressure over the eastern Pacific (also known as ridging) and lower than normal pressure (troughing ) over western Canada. 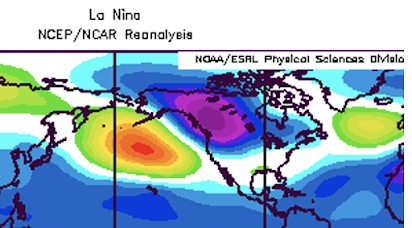 This pattern tends to promote cold northerly winds along the coast that enhance the change of lowland snow.

But much of our past January was not like this.  In fact, during the past month, the anomaly (again difference from normal) pattern aloft was quite different from what is expected during a La Nina winter (see below).  For the first half of the month, low pressure extended westward over the ENTIRE north Pacific, with higher than normal pressure to the south.  This produces warm, moist southwesterly flow that brought us warm temperatures and bountiful rain.

The second  half of the month had an offshore ridge, but no troughing (low pressure) over the continent.  We just get moist, mild onshore flow and light precipitation with this pattern.  Just not right. 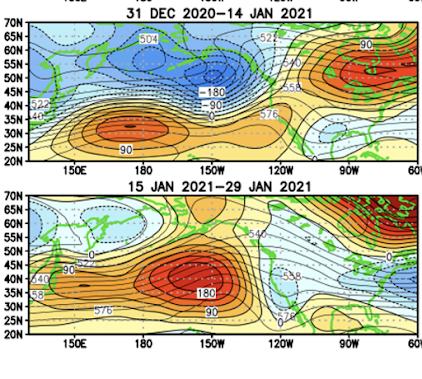 OK, we have essentially one month left.  We can look forward with some skill 7-9 days.  What does the best forecast system in the world (the European Center) suggest?  In fact, I will show you the average of their large and excellent ensemble system in which they run the model many times and average the result.  The GOLD STANDARD for prediction.

The forecast upper level (500 hPa) anomaly (difference from normal) from the European Center looks much more La Nina like.  Higher than normal pressures (or heights) offshore (red), with lower than normal values inland (blue color).  It is in the neighborhood for what we were hoping for. 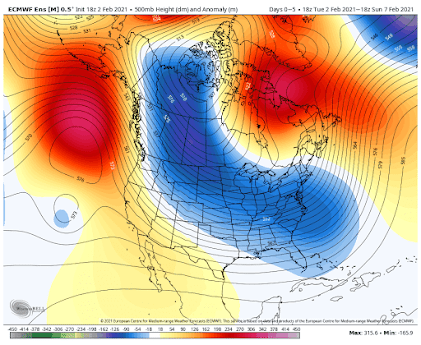 But being in the neighborhood is not good enough:  most of the forecasts are not producing lowland snow for the next week (see below).  Each line is the snow forecast at Seattle for one forecast. Time increases to the right.  A few gray colors—nothing serious. 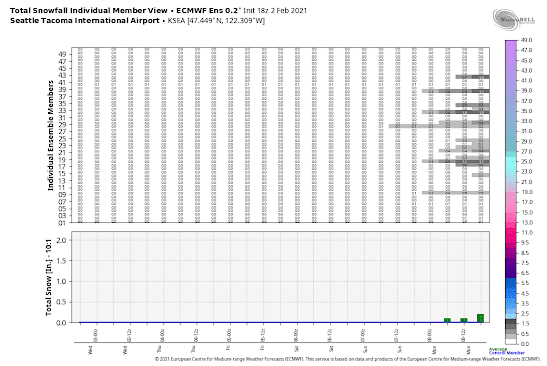 But I would not give up yet.  The atmosphere seems to be trying to get into the La Nina configuration and perhaps the very specific set up needed for Northwest lowlands snow will happen.   But we are rapidly running out of time.

But one one thing seems clear, the situation should be favorable for snow in the mountains, as suggested by the European Center 10-days snow forecast shown below: Can A Drone Sailboat Survive the Big Storms?