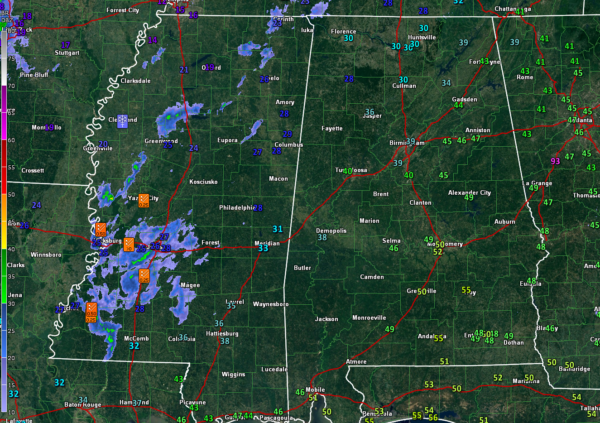 Temperatures in Mississippi are below freezing in areas to the northwest of I-59.

It is currently 28F at Jackson International Airport, 25F in Greenwood, 20F in Greenville, and 14F in Tunica.

A large area of sleet is moving across Central Mississippi at this hour. There are several reports of sleet accumulating to a depth of 0.25 to 0.50 inches from places like Yazoo City, Vicksburg, Crystal Springs, and Hamburg east of Natches. Roads are reported to be sleet covered at Hamburg in Franklin County. There are power outages in Frnankin County.

Roads are reportedly hazardous across much of this area including I-20 at Edwards, and I-55 at Crystal Springs.

Sleet is accumulating in Jackson. Roads, and especially bridges and overpasses are very icy, with accidents being reported.

Sleet and snow are bring reported in Brookhaven.

Across Alabama, we’re dry at this hour and socked in with clouds. Temperatures are below freezing over the Tennessee Valley, and in the middle 30s to lower 40s across Central Alabama. It is 39F at the Birmingham Airport and 40F at Tuscaloosa. These readings are in line with forecast highs for today.

The precipitation over Mississippi will move into West and Northwest Alabama this evening as freezing rain and sleet.

RECAPPING THE WATCHES, WARNINGS, AND ADVISORIES FOR ALABAMA

WINTER WEATHER ADVISORY FOR NORTH ALABAMA THIS AFTERNOON
A Winter Weather Advisory has been issued for Lauderdale, Colbert, Franklin, Lawrence, Limestone, Madison, Morgan, and Cullman counties in North Alabama until 6 p.m. for any light freezing rain or sleet that moves across the area this afternoon.