COLD FRONT PASSING THROUGH: A cold front is moving through Alabama this morning; we note a few spotty showers over the central part of the state at daybreak. This afternoon, showers will be confined to the southern third of the state ahead of the front, and the northern counties will enjoy a mostly sunny day with lower humidity and a fresh north breeze.

Showers over South Alabama will end tonight, and we expect a long dry spell for Alabama, which should last for at least seven days. Look for sunny days and clear nights tomorrow through Friday. Fall weather fans will love temperatures during the early morning hours tomorrow and Wednesday; we expect most places across North/Central Alabama to dip into the cool 50s for the first time this season. Highs will be in the 80s, but humidity levels will be low for September.

THE ALABAMA WEEKEND: Dry weather continues with a good supply of sunshine Saturday and Sunday… highs will be in the 84-88 degree range, with lows in the 60s. No rain worries for college games in the state Saturday.

NEXT WEEK: The quiet pattern continues. Humidity levels will creep up with highs in the mid to upper 80s; a few isolated showers could show up over the latter half of the week, but we see no sign of any major rain event during the week. See the daily Weather Briefing video for maps, graphics, and more details. 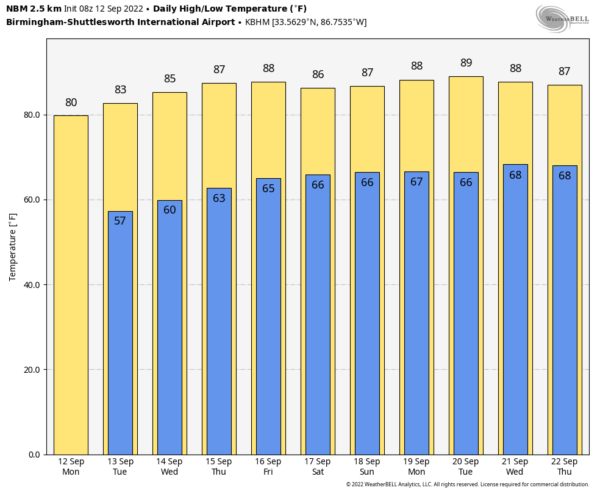 TROPICS: The Atlantic basin remains remarkably calm for mid-September, the climatological peak of the hurricane season. NHC is monitoring two tropical waves in the eastern Atlantic, but they both have only a low chance of development over the next five days. No sign of any tropical trouble for the U.S. Gulf Coast or Atlantic coast for at least the next 7-10 days. 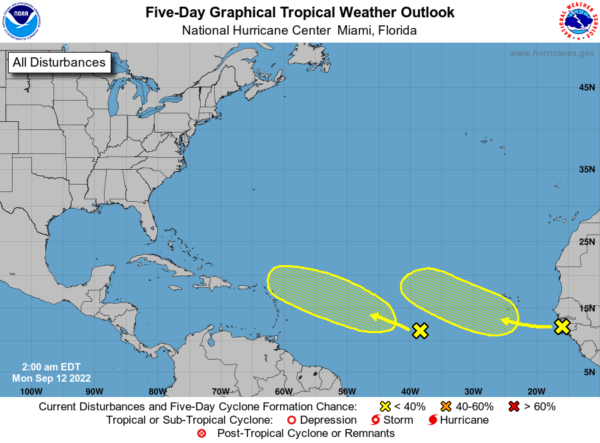 ON THIS DATE IN 1979: Hurricane Frederic crossed over the western end of Dauphin Island around 10p CT. An automated wind gust recorder at the top of the Dauphin Island Bridge recorded a peak wind gust of 145 mph around 9:40p. At landfall, Frederic was a Category 4 on the Saffir-Simpson Hurricane intensity scale, raking the Mobile Bay area with winds gusting from 100-145 mph for several hours on the evening of September 12 through the early morning of September 13. Hurricane wind gusts were experienced as far inland as Choctaw County during the early morning hours of September 13.

Near-total property damage occurred along the Alabama coastline between Fort Morgan and Gulf Shores, the latter seeing 80% of its buildings completely destroyed. The causeway linking Dauphin Island to the mainland was swept away in many areas. Mobile suffered extensive damage as well. Structural failure was widespread in the immediate landfall area with industrial, residential and governmental buildings as well as hospitals suffering heavy damage. Nearly 90% of the Mobile area lost electricity, and the historic City Hall experienced heavy roof damage. Many small beach houses were completely destroyed by high winds before the storm surge could add any effects.

The rebuilding process after Frederic was responsible for the transformation of Gulf Shores and Orange Beach… from small coastal villages to the booming tourist destination they are now.

ON THIS DATE IN 1999: Hurricane Floyd, a Category 4 storm with top winds of 145 mph, was making residents along the U.S. East Coast very nervous as it steamed steadily westward. Floyd was once forecast to strike Florida but turned away. Instead, Floyd hit the Bahamas at peak strength, causing substantial damage. It then paralleled the East Coast of the United States, causing massive evacuations and costly preparations from Florida through the Mid-Atlantic States.