NOVEMBER WARMTH: We have a few spotty showers over North Alabama early this morning, but most of the state is dry with temperatures in the 60s. With a strong upper ridge overhead, we expect highs in the 80-84 degree range today and tomorrow, with new records very possible. Record highs at Birmingham are 82 today, and 84 tomorrow, both set in 2005. The average high today is 68, so these temperatures are around 15 degrees above average.

We are forecasting a mix of sun and clouds today with a few scattered showers, mainly over the northern half of the state. Tomorrow will be dry with a partly sunny sky.

MUCH COOLER WEDNESDAY: A “backdoor” front will push through in dry fashion tomorrow night from the northeast, and Wednesday will be a sunny, breezy, and much cooler day with a high between 68 and 71 degrees. Thursday will be another sunny day with a high in the low to mid 70s.

Some rain is possible over the eastern third of the state Friday as a tropical system passes to the east, but the rest of the state will be dry with a high in the low 70s. The heavier rain Friday will be over Georgia.

COLD WEEKEND: The coldest air so far this season rolls into Alabama over the weekend. Highs drop into the mid 50s Saturday with a very cool north wind, and temperatures will drop into the 27-32 degree range by Sunday morning. Some North Alabama communities might not get out of the 40s Sunday as the cold air continues to settle into the state. The weather will be dry with sunny days and clear nights.

NEXT WEEK: Lows will be in the 20s pretty much statewide early Monday morning. The rest of the week looks mostly dry with temperatures remaining below average… highs in the 50s and lows mostly in the 30s. See the daily Weather Briefing video for maps, graphics, and more details. 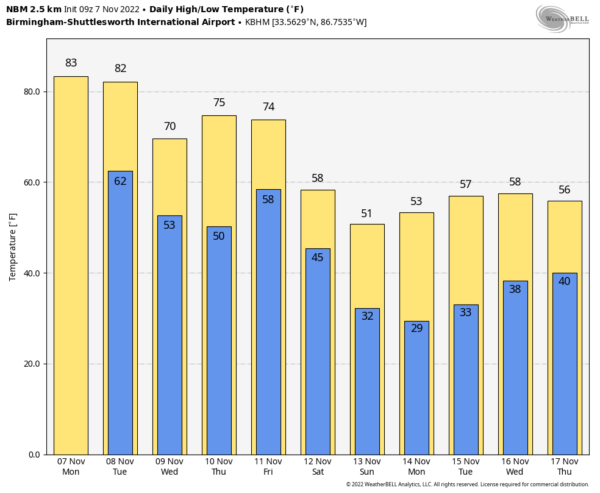 TROPICS: Subtropical Storm Nicole formed in the Atlantic early this morning; it is about 550 miles east of the Northwest Bahamas with winds of 45 mph. The system is expected to slow strengthen, and will move across the northern Bahamas Wednesday, and the Florida Peninsula (not the panhandle) Thursday with lots of wind and rain. For now the NHC forecast keeps Nicole as a tropical storm, but it’s not out of the question for Nicole to reach hurricane strength, especially given how warm the waters are in the vicinity of the Bahamas. It should be stressed, however, that no matter Nicole’s ultimate intensity, the storm’s large size will likely cause significant wind, storm surge, and rainfall impacts over a large portion of the northwestern Bahamas, Florida, and the southeastern coast of the United States during much of the upcoming week.

Nicole will remain well east of Alabama, although some of the eastern counties could see some rain along with breezy conditions Friday. 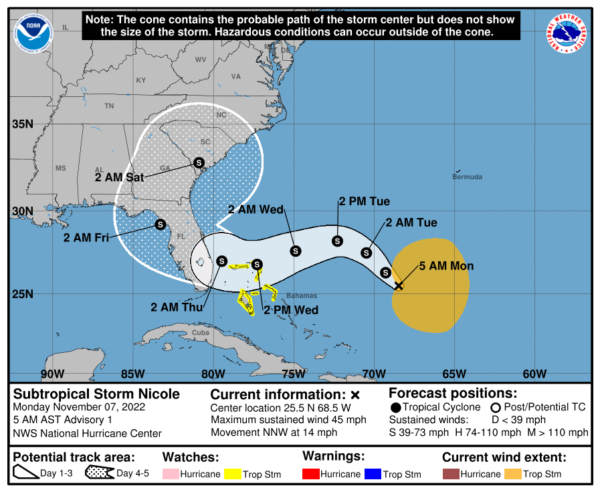 ON THIS DATE IN 1957: A historic tornado outbreak impacted southeast Texas and southwestern Louisiana. Ten people were killed.

ON THIS DATE IN 2001 Typhoon Lingling struck the southern Philippines, killing 171 people with 118 missing in Camiguin. The typhoon then struck Vietnam 5 days later, killing an additional 18 people.