NICE WARM-UP TODAY: While temperatures are mostly in the 30s across Alabama early this morning, we expect a high in the low 60s today with a strong December sun. Tomorrow will be another dry, pleasant day but clouds will increase during the day ahead of a strong cold front. That front will bring rain into the state tomorrow night, and SPC has expanded the “marginal risk” (level 1/5) of severe thunderstorms to include much of the state. 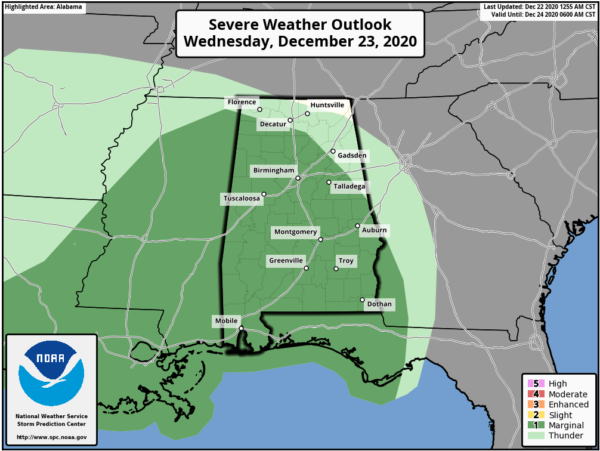 Models still show no surface based instability over most of the state; the main issue will come not from thunderstorms, but from pressure gradient winds. Ahead of the cold front, winds will gust to 30/35 mph late tomorrow night as the rain moves through. The higher winds will come from midnight tomorrow night until 6:00 a.m. Thursday. Rain amounts of 1/2 to 1 inch are likely.

MUCH COLDER THURSDAY: As the rain ends Thursday morning, much colder air will rush into the state. Temperatures will fall from the 40s into the 30s by afternoon with a cold northwest wind of 15-25 mph. And, as the cold air arrives, some light snow, or snow flurries will be possible over the northern half of the state. But, the deeper moisture will be well to the east, and we still expect no meaningful accumulation or impact. A few grassy areas across high terrain of Northeast Alabama could become white briefly, but even there temperatures will be above freezing and no travel impact is forecast.

The sky will clear Thursday night, and by daybreak Friday we project temperatures in the 15-25 degree range over North/Central Alabama. Icy travel won’t be an issue as the roads will be dry by then. Then, Christmas Day will be sunny and cold with a high around 40 degrees. If Birmingham stays below 40 degrees, it will be only the 12th time since 1900 that has happened on December 25.

THE ALABAMA WEEKEND: Saturday morning will be very cold, again temperatures will be somewhere between 15 and 25 degrees as the day begins. Then, with a sunny sky, we warm into the low 50s by afternoon. Sunday will be dry with a high in the upper 50s, but clouds will increase by afternoon as the next weather system approaches. Rain will likely move through late Sunday night; moisture will be limited and rain amounts should be under 1/2 inch.

NEXT WEEK: Rain ends early Monday, followed by a clearing sky with a high around 50. Global models suggest the next chance of rain comes Wednesday or Thursday, followed by a surge of much colder air. See the Weather Xtreme video for maps, graphics, and more details.

ON THIS DATE IN 1989: Between December 22 and December 24, 1989, deepening low pressure pulled a frigid arctic air mass into the southeastern United States. The high in Birmingham on December 22, 1989 was 15 degrees; temperatures dropped to 1 degree the following morning, on December 23. This sequence of events produced a historic snowstorm and a rare white Christmas east of Alabama. At Charleston, South Carolina, the storm deposited 8 inches of snow – the greatest snowfall in modern history. At Savannah, Georgia, the storm total accumulation of 3.6 inches tied the greatest snowfall in modern history.

Cool clouds that composed the Chinook arch. Winds were about 50mph at this spot. Alberta, Canada

Cool clouds that composed the Chinook arch. Winds were about 50mph at this spot. Alberta, Canada