STILL DRY TODAY: Temperatures are well below freezing over the northern half of Alabama early this morning with many communities in the 20s. The weather will stay dry today with a partly to mostly sunny sky; temperatures reach the mid 50s this afternoon. Clouds will increase tonight as the next weather system approaches from the west.

Tomorrow will be cold and wet; periods of rain are likely through the day with temperatures holding in the 40s over North/Central Alabama. We do note SPC has defined a “marginal risk” (level 1/5) of severe storms near the Gulf Coast, for southern Mobile and Baldwin counties, and the Florida Panhandle. A few storms there could produce gusty winds tomorrow afternoon and evening, but the overall threat of severe storms is not especially high. Rain amounts around 1/2 inch are likely.

TOMORROW NIGHT: A cold core upper low will swing through North Alabama, and we know these can bring surprises. With dynamic cooling in play, there is a chance the rain could mix with, or change to snow over some of the northern counties of Alabama tomorrow night. The best chance of seeing some snow is along and north of U.S. 278… north of a line from Hamilton to Cullman to Gadsden. Where heavier snow showers form under the upper low, the ground could become white in spots, but at the moment we are not expecting any major accumulation or meaningful impact. Of course, we will watch model trends closely along with developments to the west. 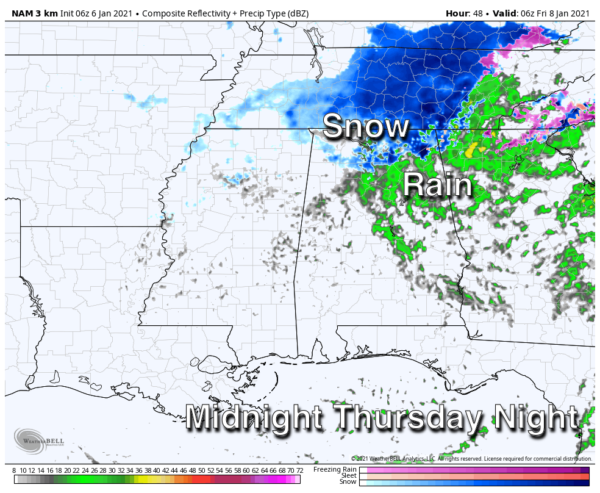 FRIDAY: The day will be cloudy and cold. Some lingering light rain is possible during the morning, maybe even a few snow flurries. Temperatures will struggle to reach the low to mid 40s, and for most of the state the clearing will hold off until Friday night.

THE ALABAMA WEEKEND: Saturday will be cold and dry; after starting the day in the 20s the high will be in the mid 40s with a partly sunny sky. Pretty much the same situation Sunday; dry with a high in the upper 40s.

NEXT WEEK: There is still great uncertainty in what happens Monday. The American GFS model now shows no rain or snow, shunting the feature well to the south in the Gulf of Mexico. But, the European global model shows widespread rain for the state Monday, with some potential for a little snow on the northern flank of the precipitation. Using the ensemble approach, the chance of greater than one inch of snow for North Alabama is in the 0-20 percent range for now.

Until this system (now in the Pacific) gets into the U.S. upper air network, we simply won’t be able to know much about it. We will have much better clarity Friday. The rest of next week looks dry with a slow warming trend; highs return to the 50s over the latter half of the week. See the Weather Xtreme video for maps, graphics, and more details.

ON THIS DATE IN 2017: Much of Central Alabama received a mixed bag of wintry weather. This weather ranged from freezing rain to sleet to snow. The heaviest accumulations of sleet and snow occurred mainly near and south the Interstate 20 corridor. The highest amounts were observed in Tuscaloosa and Jefferson Counties, where up to 1.5 inches of sleet and snow fell.