QUIET AFTERNOON: As advertised, the sky has become mostly sunny across North and Central Alabama this afternoon with temperatures around 70 degrees. Clouds linger over the southern counties, but there is nothing there on radar. The weather will be cool and dry statewide tonight… temperatures will drop into the mid 40s over the northern half of the state.

TOMORROW AND THE WEEKEND: Clouds increase tomorrow, and rain will push into the western counties late in the day. Expect periods of rain, and maybe a thunderstorm or two, tomorrow night into Saturday morning. For most places the main window for rain comes from about 6:00 p.m. tomorrow through 11:00 a.m. Saturday. Rain amounts of around 1/2 inch are likely over North/Central Alabama, with amounts to one inch across the southern counties. Saturday afternoon will be dry, but clouds will linger. The high tomorrow will be in the 67-70 degree range, and in the mid 60s Saturday.

Sunday will feature a partly sunny sky with a high in the mid to upper 60s.

NEXT WEEK: The weather looks rain-free Monday through Thursday with highs in the low to mid 70s… rain returns at the end of the week on Friday (April 23)… See the Weather Xtreme video for maps, graphics, and more details. 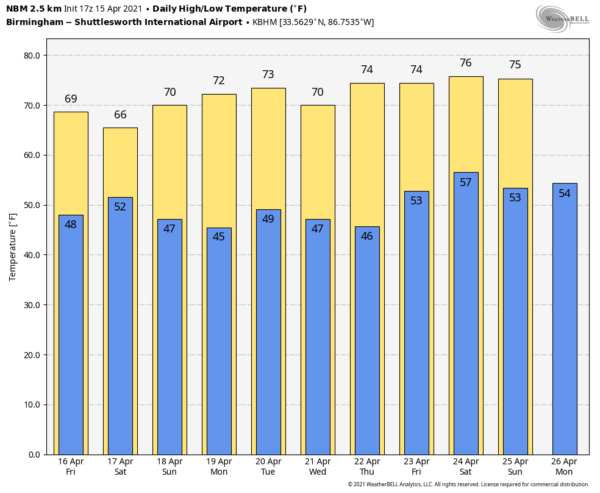 FOOTBALL WEATHER: Both Auburn and Alabama will hold their annual spring scrimmage games Saturday. The game in Tuscaloosa kicks off at 12 Noon… kickoff in Auburn is set for 1:00. Some rain is likely Saturday morning across the state, but that will will be gone by early afternoon. Expect dry, but mostly cloudy weather in Tuscaloosa with temperatures in the 60s. Some lingering light rain is possible around kickoff in Auburn, but most of the game will be rain-free with overcast conditions. Temperatures there will also be in the 60s.

ON THIS DATE IN 1956: An F4 tornado tore across the western and northern fringes of Birmingham. The twister killed 25 along its 20 mile path. Most of the deaths occurred in the Stacey Hollow and McDonalds Chapel communities, save for two young sisters in the Sandusky area. Over two hundred people were injured and eleven hundred left homeless. A total of 400 homes and buildings were destroyed.

ON THIS DATE IN 1998: An F3 tornado hits downtown Nashville causing extensive damage but no loss of life. An additional 62 tornadoes touched down in Arkansas, Kentucky, and Tennessee. These tornadoes caused 12 fatalities and approximately 120 injuries.

ON THIS DATE IN 2011: The “forgotten tornado outbreak”. A total of 45 tornadoes touched down in Alabama. An EF-3 produced a swath of damage in Tuscaloosa County from the community of Ralph, to just south of Veterans Memorial Parkway in Tuscaloosa. Another large EF-3 tornado struck the Myrtlewood-Pinhook communities in Marengo County. Several dozen single-family and mobile homes were destroyed or severely damaged. One person was killed when his mobile home was tossed several hundred feet across Alabama Highway 69.

Another EF-3 tornado moved through the Boones Chapel community in Autauga County. This twister was the third one to affect the same general area for the day, but this one was a killer. Three people were killed and four were seriously injured as the tornado destroyed their mobile home. The event was forgotten by many because of what would happen 12 days later… the generational tornado outbreak of April 27, 2011 that produced 62 tornadoes, killing 252 people in Alabama.