PLEASANT WINTER DAY: With a mostly sunny sky, temperatures are generally in the low to mid 50s this afternoon over the northern half of the state, with low 60s for South Alabama. Tonight will be mostly fair with a low in the 26-34 degree range.

Some enjoyed seeing fallstreak holes over Alabama this morning. The are also known as a? “hole punch cloud”… an elliptical gap that can appear in altocumulus or cirrocumulus clouds when the supercooled water droplets abruptly freeze. These ice crystals then fall and leave a hole behind. The process is often initiated by a passing aircraft.? 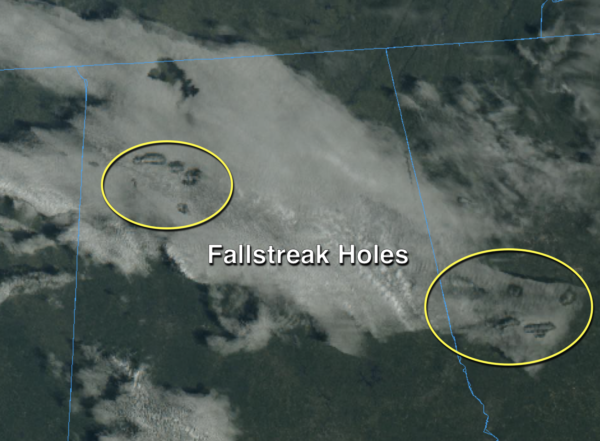 THE ALABAMA WEEKEND: After a sunny start, clouds increase during the day across Alabama tomorrow, and rain will push into the state tomorrow night. The main window for rain will come from about midnight tomorrow night through 12:00 noon Sunday… rain amounts of 1/2 inch or less are expected. There is no surface based instability, so no risk of severe storms, and probably very little thunder. The high tomorrow will be between 56 and 61 degrees, and mid 60s are likely Sunday.

NEXT WEEK: Much colder air drops into the state Monday; some communities across the Tennessee Valley of far North Alabama could hold in the 30s all day; the high will be in the 40s elsewhere with a mix of sun and clouds and a chilly north wind. Then, we are dry Tuesday and Wednesday with a warming trend; the high Tuesday will be around 50, followed by upper 50s Wednesday. Rain returns Thursday night and Friday… for now it doesn’t look like a severe weather setup with no instability. See the Weather Xtreme video for maps, graphics, and more details.

ON THIE DATE IN 1921: A small but intense windstorm resulted in the “Great Olympic Blowdown” in the Pacific Northwest. Hurricane force winds, funneled along the mountains, downed vast expanses of Douglas fir trees, and the storm destroyed eight billion board feet of timber. Winds at North Head WA gusted to 113 mph. On January 31, 1921, the International News Services reported from Aberdeen, Washington, “It is reported that thousands of dollars in damage was done to buildings and storms in Aberdeen and Hoquiam. The wind velocity was estimated at from 125 to 150 miles an hour. Four steel smokestack reaching almost 200 feet into the air were the first to collapse before the terrific onslaught of the gale. The giant chimneys crashed down on dwellings crushing them like houses of cardboard.”

ON THIS DATE IN 1966: This was a bitter cold day across Alabama in which 7.2 inches of snow fell in Huntsville. The morning temperature at Huntsville was -3F… Birmingham’s low was 2 degrees above zero. Mobile’s low that morning was 19. Temperatures the following morning would be even colder.