DRY THROUGH FRIDAY: Some clouds are over the Tennessee Valley of North Alabama this afternoon, otherwise the sky is sunny statewide. Temperatures are below average for late October; many North Alabama communities are holding in the 50s. Tonight will be clear and cool with a low in the 42-47 degree range.

The sky will be mostly sunny tomorrow and Friday with highs in the 70s.

THE ALABAMA WEEKEND: Clouds move in late Friday night, and rain will likely begin over the western half of Alabama at some point during the day Saturday. Then, rain should be widespread across the entire state Saturday night into Sunday morning. Models are suggesting a dry slot will work into the state Sunday afternoon with potential for some clearing. The high Saturday will be in the low 70s, followed by upper 60s Sunday.

NEXT WEEK: A few showers are possible Monday morning, but for now the weather looks dry Monday afternoon and Monday night for the trick or treaters. The rest of the week looks generally dry and mild; some rain could return late in the week, but for now it doesn’t look like a big rain event. Highs will be in the 70s… See the daily Weather Briefing video for maps, graphics, and more details. 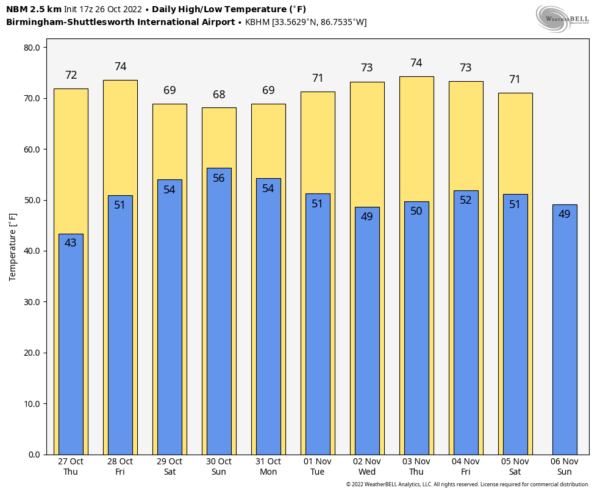 TROPICS: A trough of low pressure stretching from the eastern Caribbean northward to the southwestern Atlantic continues to produce a broad area of disorganized showers and thunderstorms. Environmental conditions appear conducive for some gradual subtropical development of this system, and a subtropical depression could form while it drifts northward during the next couple of days. The system is then forecast to meander over the subtropical western Atlantic to the west or southwest of Bermuda. Upper-level winds are forecast to become less conducive for development by the end of the weekend. This feature will remain well east of the U.S.

And, an area of low pressure is expected to form over the eastern Caribbean Sea this weekend. Environmental conditions are forecast to be conducive for gradual development, and a tropical depression could form by early next week while the disturbance moves generally westward or west-northwestward over the central Caribbean Sea. Remains to be seen if this impacts any land area.

FOOTBALL WEATHER: For Friday night’s high school games across Alabama, the sky will be mostly fair with temperatures falling from the low 70s at kickoff, into the 60s by the second half.

Saturday Auburn hosts Arkansas (11:00a CT kickoff) at Jordan-Hare Stadium; the sky will become mostly cloudy during the game, but for now we expect the weather to stay dry. Temperatures will rise from near 68 at kickoff into the low 70s during the second half.

The Magic City Classic (Alabama A&M vs Alabama State) is Saturday at Birmingham’s Legion Field (2:30p CT kickoff)… the sky will be mostly cloudy with temperatures hovering around 70 degrees during the first half, falling into the upper 60s by the final whistle. Some light rain can’t be ruled out during the second half.

UAB is at Florida Atlantic in Boca Raton Saturday night (6:00p CT kickoff)… the sky will be clear with temperatures falling from near 80 degrees at kickoff, into the mid 70s by the final whistle.

ON THIS DATE IN 1952: There have been thousands of weather reconnaissance and research flights into hurricanes in the Atlantic and Pacific since the mid-1940s. There have been several close calls, but only four flights have been lost. A B-29 Super-fortress flight into Super Typhoon Wilma 350 miles east of Leyte in the Philippines disappeared on this date. No trace was ever found of the plane or crew. In the last report, the flight was in the Super typhoon’s strongest winds, which were around 160 mph.

ON THIS DATE IN 1998: Hurricane Mitch, the second deadliest hurricane in the Atlantic Ocean, reached Category 5 strength on this day.