RADAR CHECK: The most widespread rain across Alabama early this morning is over the northeast counties of the state associated with Tropical Depression Nicole, but some patchy light rain is also over the central and western counties of the state as well. Rain will end by midday, and most of the state will be dry this afternoon and tonight (although clouds will linger). Today’s high will be close to 70 degrees.

MUCH COLDER FOR THE WEEKEND: The coldest air so far this season will arrive tomorrow. With the push of colder air will come some light rain tomorrow morning for the northern third of the state… that rain will end by early afternoon. Otherwise, tomorrow will be mostly cloudy and much colder with a high in the 48-54 degree range. A brisk north wind will make it feel colder. The sky will clear tomorrow night, and by daybreak Sunday temperatures will be in the 26-32 degree range over the northern half of the state. Sunday will be a sunny day with a high in the low 50s, about 15 degree below average for mid-November in Alabama.

NEXT WEEK: Forecast confidence is not especially high due to model inconsistency. Monday will be dry with a high in the upper 50s, followed by some rain at times Tuesday. The latest guidance now suggests the rest of the week will be dry with highs in the 50s. See the daily Weather Briefing video for maps, graphics, and more details. 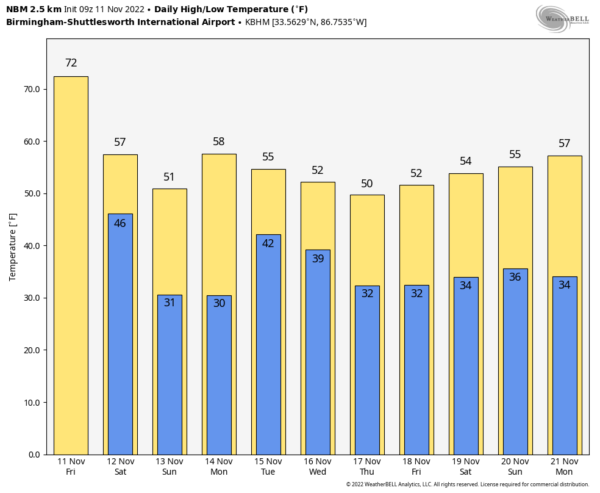 TROPICS: Tropical Depression Nicole, with winds of 35 mph, is south of Macon, Georgia early this morning. The system will dissipate later today over the southern Appalachians, and the rest of the Atlantic basin is very quiet. Hurricane season ends at the end of this month. 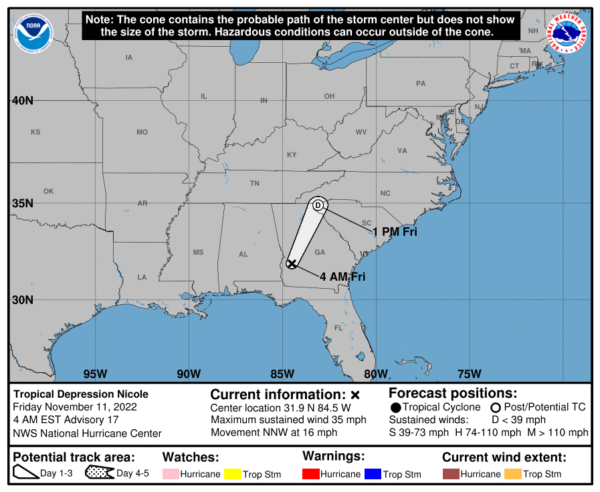 FOOTBALL WEATHER: The weather will be dry for the high school playoff games tonight across Alabama, but it will be mostly cloudy and breezy with temperatures falling into the 50s.

Tomorrow, Alabama travels to Oxford to take on Ole Miss (2:30p CT kickoff)… the sky will be mostly sunny with temperatures in the mid to upper 40s along with a brisk, chilly north wind.

UAB will host North Texas at Protective Stadium in downtown Birmingham tomorrow (2:30p CT kickoff)… the sky will be mostly cloudy with a kickoff temperature around 52 degrees, falling into the 40s by the final whistle. Some rain is possible in Birmingham tomorrow morning, but it will be over by the time the game begins.

Auburn hosts Texas A&M tomorrow evening at Jordan-Hare Stadium (6:30p CT kickoff). The sky will be mostly fair with temperatures falling from near 47 at kickoff, into the low 40s by the final whistle.

ON THIS DATE IN 1940: An Armistice Day storm raged across the Great Lakes Region and the Upper Midwest. A blizzard left 49 dead in Minnesota, and gales on Lake Michigan caused shipwrecks resulting in 59 deaths. Up to seventeen inches of snow fell in Iowa, and at Duluth MN, the barometric pressure reached 28.66 inches. The blizzard claimed a total of 154 lives and killed thousands of cattle in Iowa. Huge snowdrifts isolated whole towns.