RADAR CHECK: As advertised, rain is widespread across Alabama early this morning with temperatures in the upper 40s and low 50s in most spots. Rain will end across West Alabama later this morning, and the final batch of showers should move out of East Alabama by mid-afternoon. Otherwise, today will be cloudy with cool with a high in the low to mid 50s. The average high for Birmingham on November 15 is 65. 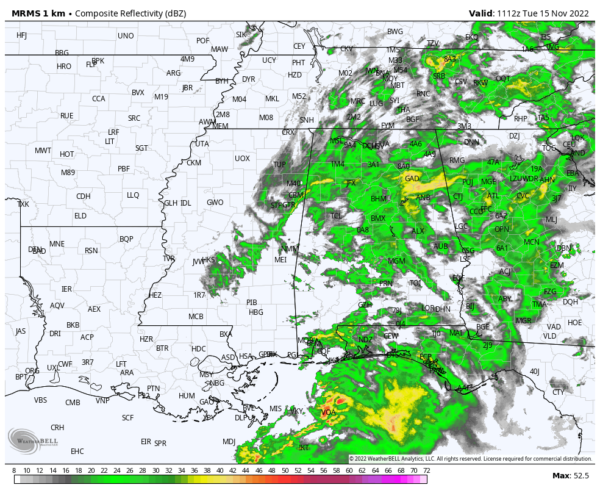 The sky will clear tonight, and tomorrow will be a dry day with a partly sunny sky… the high will be in the 52-56 degree range. Thursday and Friday will feature a sunny sky both days, but temperatures remain well below average. The high Thursday will be in the upper 40s, followed by low 50s Friday… morning lows will be in the 20s.

THE ALABAMA WEEKEND: Expect sunny cool days and clear cold nights. Highs in the 50s, lows in the 24-32 degree range.

NEXT WEEK: The weather will stay dry Monday and Tuesday with highs generally in the 50s. Then, we rise into the low 60s over the latter half of the week. Global model data suggests the next rain event will come around Thanksgiving Day (Thursday), but it is way too early to be specific concerning timing, rain amounts, etc. See the daily Weather Briefing video for maps, graphics, and more details. 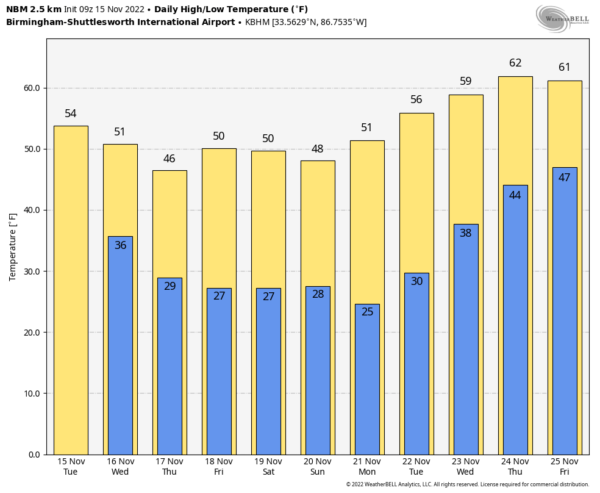 TROPICS: The Atlantic basin is quiet, and tropical storm formation is not expected through the weekend. Hurricane season ends at the end of this month.

ON THIS DATE IN 1989: An F4 tornado tore through the southern part of Huntsville around 4:30 p.m.; it was responsible for 21 deaths 463 injuries. It touched down near Madkin Mountain on Redstone Arsenal, southwest of Huntsville. The tornado moved northeast towards the heavily-populated Airport Road area, where it would destroy or damage 80 businesses, 3 churches, a dozen apartment buildings, and more than 1,000 cars. It moved on, climbing over Garth Mountain, demolishing Jones Valley Elementary School, and destroying 259 homes in the Jones Valley area. The tornado was on the ground for just over 18 miles; twelve of the 21 fatalities occurred in automobiles as many persons were homeward bound during the afternoon rush hour.

The tornado warning came late; this was before Doppler Radar was operational.

ON THIS DATE IN 2007: Tropical Cyclone Sidr, a Category 4 storm on the Saffir-Simpson scale, brings torrential rain 150-mph winds and a four ft storm surge to the Bangladesh coast. At least 3200 people die, and millions are left homeless. Since records began in 1877, Sidr obtained the title of the second-strongest cyclone to make landfall in Bangladesh.