TORNADO DAMAGE SURVEYS COMPLETED SO FAR
As of 9 pm Friday night, the confirmed tornado count is at 7 for Central Alabama, but that count is expected to rise as damage surveys will continue today. Here is the list of confirmed tornadoes, EF-Scale rating, and estimated maximum wind speeds:

A FEW STRONG STORMS POSSIBLE OVER THE WEEKEND
For Saturday, a warm front will be moving northward through the area during the pre-dawn hours into the late morning hours that will bring a chance of a few showers and thunderstorms. There will be a small risk for strong to marginally severe storms for the extreme northern parts of Central Alabama and for all of North Alabama until the activity moves out before noon, with gusty winds and small hail being the main threats. 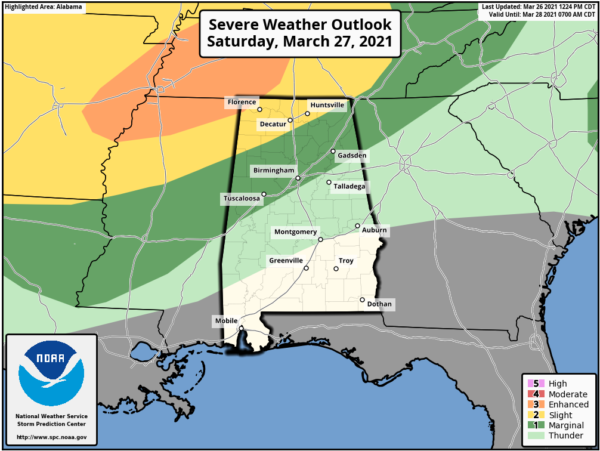 After that, we’ll have a decent break with dry and warm weather across the area before a cold front will approach and eventually move into the area after midnight, bringing with it rain and thunderstorms. SPC has a level 2 out of 5 Slight Risk for severe storms up for much of North Alabama and into the northwestern corner of Central Alabama, mainly for locations along and north of a line from Stevenson (Jackson Co.) to Hartselle (Morgan Co.) to Pine Springs (Lamar Co.). A level 1 out of 5 Marginal Risk is up for locations south of that to a line stretching from Boligee (Greene Co.) to Pelham (Shelby Co.) to Jacksonville (Calhoun Co.). This Severe Weather Outlook expires at 7 am on Sunday. The threat for strong to severe storms will begin around 3:00 am for the northwestern parts of Central Alabama. Tornadoes, damaging winds, and quarter size hail will be possible. 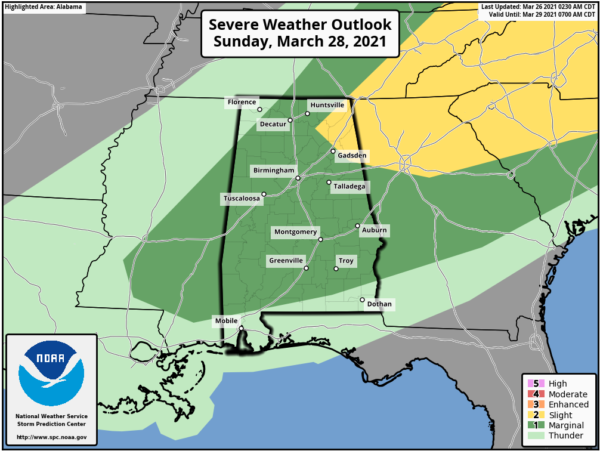 The front will continue to work its way across Central Alabama throughout much of the day on Sunday, and storms with the potential for a few strong to severe storms possible until the threat comes to an end by the early evening hours. Tornadoes, damaging winds, and quarter size hail will be possible. The good news is that the activity will be in a weakening state as it moves eastward. SPC has a Slight Risk up for the northeastern corner of North/Central Alabama mainly for locations east of a line from Bridgeport (Jackson Co.) to Guntersville (Marshall Co.) to Coldwater (Cleburne Co.) A Marginal Risk is up for the rest of the area except for the extreme northwest corner of the area west of a line from Elgin (Lauderdale Co.) to Bexar (Marion Co.).

RAIN AT TIMES THROUGH MUCH OF THE WORK WEEK
A stray, left-over shower or two may be possible before sunrise on Monday, but the rest of the day will have a mix of sun & clouds with a small chance of a scattered afternoon shower or two. Highs in the lower 60s to the lower 70s.

A short wave will move through the area on Tuesday that will bring another chance of showers mainly through the morning hours, but a very small risk for showers will continue through the remainder of the day. Skies will be mostly cloudy and highs in the upper 60s to the mid-70s.

A cold front will approach the area on Wednesday morning that will bring a chance of showers and a storm or two, but those will become likely later in the day. The good news is that the associated low will be well off to the north in Canada, so no risk of severe weather at this point. Highs will top out in the mid-60s to the lower 80s across the area.

Much of the shower and storm activity should be out of the area by sunrise on Thursday, which will leave us with skies becoming sunny by the afternoon and much cooler temperatures. Highs will be in the mid-50s to the mid-60s.

Friday will start off chilly with lows in the lower 30s to right around 40 degrees with a light frost for some locations in the northern half of the area. After the sun comes up and moves higher into the sky, the daytime highs will eventually reach the lower to mid-60s.

ON THIS DAY IN WEATHER HISTORY
1994 – An F4 tornado tracked 50 miles through St. Clair, Calhoun, and Cherokee Counties in Alabama, killing 22 people and injuring 150. 20 people were killed when the tornado destroyed the Goshen United Methodist Church in Cherokee County.

BEACH FORECAST CENTER
Get the latest weather and rip current forecasts for the beaches from Dauphin Island, AL, to Panama City Beach, FL, on our Beach Forecast Center page. There, you can select the forecast of the region that you are interested in.