RADAR CHECK: A mass of showers and thunderstorms is pushing into West Alabama early this morning ahead of a disturbance over the Mid-South moving down through the northwest flow aloft over the region. Expect scattered to numerous showers and storms today, but still it won’t rain everywhere (summer rain distribution is always uneven here). Heavier storms this afternoon will shift down into South Alabama, where the air will be more unstable. Temperatures won’t get out of the 80s today, but the exception is Mobile and Baldwin counties, where the high will exceed 90 degrees.

REST OF THE WEEK AND THE WEEKEND: A moist, unstable airmass will cover Alabama, and we are forecasting a number of showers and storms around on a daily basis through the weekend. Understand it won’t rain everywhere each day, and the sun will be out at times, but the overall pattern looks unsettled with a passing shower or storm possible on a fairly regular basis. While most of the showers and storms will come from noon to midnight, a few late night or morning showers can’t be ruled out in this northwest flow aloft pattern.

Temperatures remain below average with highs mostly in the mid 80s. Global models suggest temperatures could hold below 90 degrees for much of Alabama all the way through the end of August… we don’t see that very often here.

NEXT WEEK: No real change; the overall pattern favors scattered to numerous showers and storms on a daily basis through the week with some sun along the way. Like this week, most of the showers will come during the afternoon and evening hours, but not necessarily all of them; See the daily Weather Briefing video for maps, graphics, and more details. 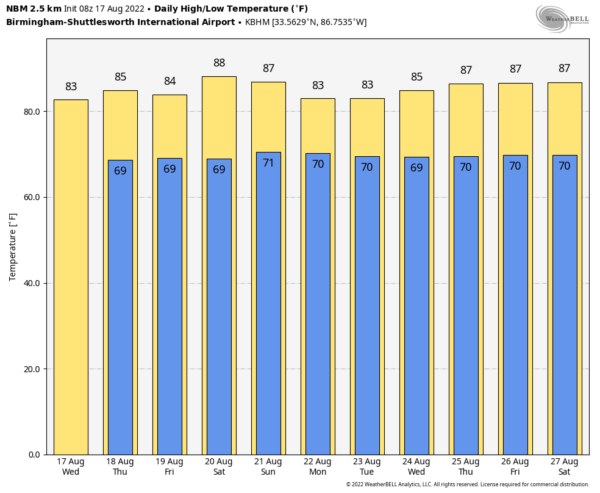 TROPICS: A tropical wave near northern Nicaragua and eastern Honduras is forecast to move across Central America during the next few days and emerge over the Bay of Campeche, where an area of low pressure could form on Friday. Some gradual development of this system is possible while it moves northwestward over the southwestern Gulf of Mexico through the weekend. NHC gives the system only a 20 percent chance of development over the next five days… the rest of the Atlantic basin remains very quiet. 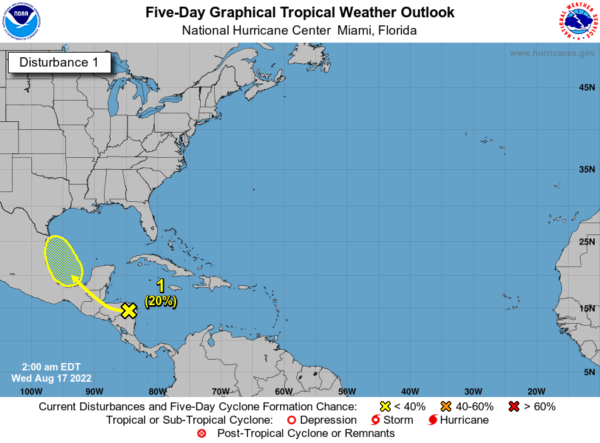 ON THIS DATE IN 1946: An estimated F-4 tornado killed 11 people and injured 100 others in the Mankato, Minnesota area around 6:52 PM. The deaths and most of the injuries occurred in the complete destruction of the 26 cabins at the Green Gables tourist camp, 3 miles southwest of Mankato. A 27-ton road grader was reportedly hurled about 100 feet. Another tornado an hour later destroys downtown Wells, Minnesota.

ON THIS DATE IN 1969: Hurricane Camille slammed into the Mississippi Gulf Coast. It is the second most intense tropical cyclone on record to strike the United States, behind the 1935 Labor Day hurricane, and one of only four hurricanes to be at category five strength at the time of U.S. landfall (the others were Hurricane Andrew in 1992, and Hurricane Michael in 2018). Camille caused tremendous damage in its wake, and produced a peak official storm surge of 24 feet. The hurricane flattened nearly everything along the Mississippi coast, and caused additional flooding and deaths inland while crossing the Appalachian Mountains of Virginia. In the U.S., Camille killed more than 259 people.