SUNNY AFTERNOON: With sunshine in full supply across Alabama this afternoon, temperatures are in the 78-82 degree range for most places. Clouds will move in tonight, however, and a batch of rain and storms will arrive early tomorrow morning. These storms could be strong with small hail and gusty winds; SPC has much of North Alabama in a low end “marginal risk” (level 1/5) of severe thunderstorms for this activity.

EASTER WEEKEND: After the organized round of morning storms tomorrow, additional showers and storms will form tomorrow afternoon and tomorrow night. They will be random and scattered, much like a summer day, and the sun could break out at times. So tomorrow afternoon won’t be a “wash out” by any means, but just be ready for a passing shower or thunderstorm. The high tomorrow will be in the mid 70s.

For Easter Sunday, models are again showing an organized mass of rain and storms during the morning hours, with scattered showers and storms in the afternoon, much like the weather we expect tomorrow. The storms Sunday could be strong with small hail and gusty winds; we do not expect a tornado threat. Sunday’s high will be in the mid 70s as well. 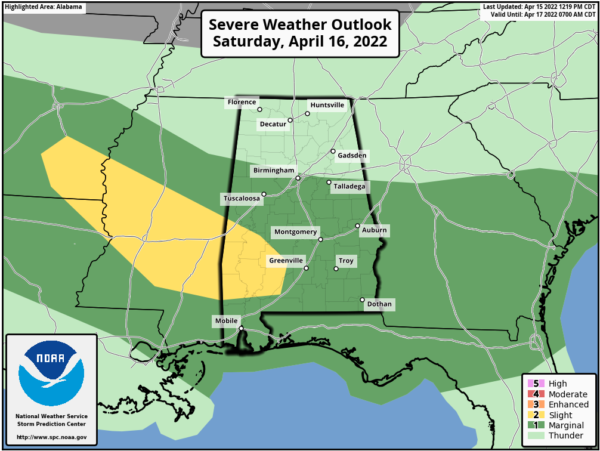 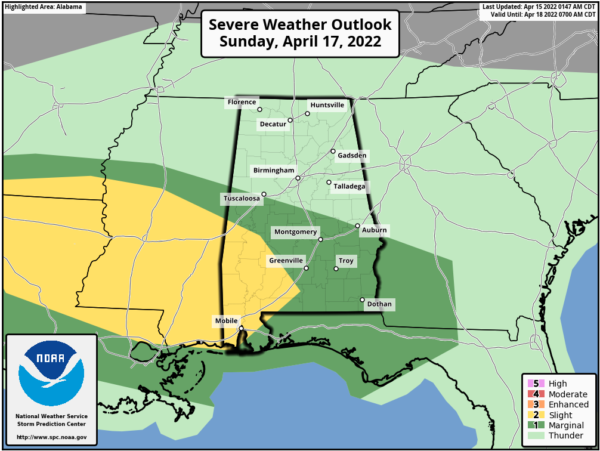 NEXT WEEK: A stray shower is possible in spots Monday, but the rest of the week is now looking dry as an upper ridge builds across the Deep South. Look for highs in the 68-72 degree range early in the week, followed by low 80s by Friday (April 22). See the Weather Xtreme video for maps, graphics, and more details. 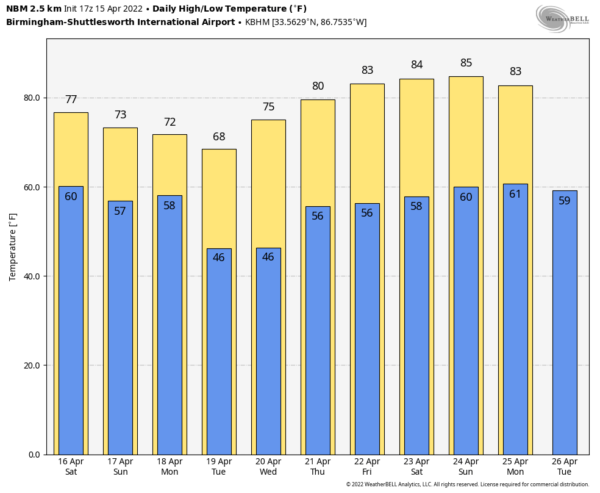 FOOTBALL WEATHER: For the Alabama “A Day” game in Tuscaloosa tomorrow (2:00p CT kickoff)… the sky will be mostly cloudy with a passing shower or storm possible during the game. Temperatures will be in the low to mid 70s.

The Birmingham Stallions will host the New Jersey Generals tomorrow evening at Protective Stadium (6:30p CT kickoff)… expect a mostly cloudy sky with a few showers possible; temperatures will fall from near 72 at kickoff, into the upper 60s by the final whistle.

ON THIS DATE IN 2011: The “forgotten” tornado outbreak of April 15, 2011; 45 tornadoes touched down across Alabama. One of the large EF-3 tornadoes to strike Central Alabama on the day created a swath of damage from northeastern Greene County, just southeast of the community of Ralph, to just south of Veterans Memorial Parkway just east of Tuscaloosa in south-central Tuscaloosa County. Winds with this tornado were estimated at 140 MPH, mainly uprooting and snapping trees. A few homes and businesses received damage as the twister moved north of Shelton State Community College and crossed Alabama Highway 69 near Taylorville, and crossing I-20/59 near Alabama Highway 82.

Another large EF-3 tornado struck the Myrtlewood-Pinhook communities (Marengo County) with estimated winds of 150 mph. Several dozen single-family and mobile homes were destroyed or severely damaged. One person was killed when his mobile home was tossed several hundred feet across Alabama Highway 69.

Another EF-3 tornado moved through the Boones Chapel community in northern Autauga County. This twister was the third one to affect the same general area for the day, but this one was a killer. Three people were killed and four were seriously injured as the tornado destroyed the manufactured home they were in. In all, at least 50 homes and one business was either destroyed or significantly damaged.

The event was “forgotten” by many due to what would happen 12 days later, on April 27, 2011, when a generational tornado outbreak would kill 252 people in our state.