**No Weather Xtreme video this afternoon**

RADAR CHECK: Rain and freezing rain along with some sleet continues over much of North/Central Alabama this afternoon, with strong to severe storms over the southern tip of the state, where severe thunderstorm warnings were issued for parts of Coffee, Dale, Geneva, Henry and Houston counties at mid-afternoon. 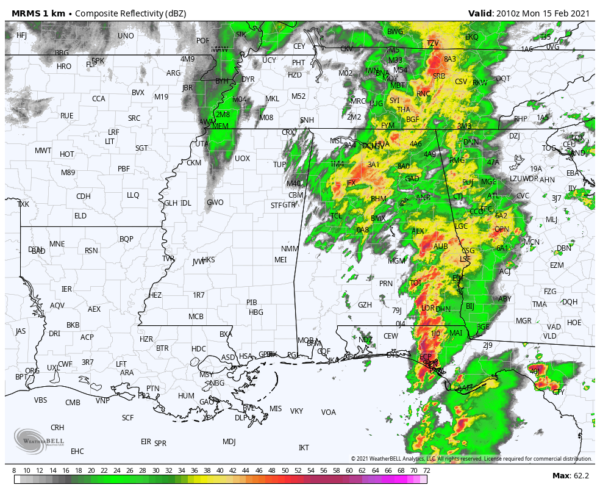 The large mass of precipitation will end from west to east over the next few hours, but roads are icy and very dangerous over much of North and West Alabama. Travel is highly discouraged in Pickens, Lamar, Fayette, Marion, Franklin, Colbert, and Lauderdale counties. Much colder air will advance eastward this evening with rapidly falling temperatures, and black ice on bridges and some roads will become an issue for cities like Birmingham, Tuscaloosa, and Cullman. Some scattered black ice is possible over in East Alabama late tonight and tomorrow morning.

COLD: Temperatures tomorrow morning will drop into the 10-18 degree range, with potential for a few single digit lows over Northwest Alabama, where ice covers the ground. The wind chill index could drop to zero in spots.

Tomorrow will be cold and dry… the sky becomes partly sunny with a high only in the 28-34 degree range over the northern half of the state.

WEDNESDAY THROUGH FRIDAY: Clouds increase Wednesday as temperatures rise into the 40s. Wet weather returns to the state Wednesday night and Thursday; this system has the potential to bring around one inch of rain. And, we note the precipitation could begin in the form of sleet or freezing rain for the northwest part of the state Wednesday night, from Florence and Muscle Shoals down toward Hamilton and Haleyville. For now it doesn’t looks like a major icing event, but we will get a better look at the system tomorrow.

Friday will feature a clearing sky, and yet another shot of colder air arrives as the high will be in the upper 30s for most places.

THE ALABAMA WEEKEND: The weather will be dry Saturday and Sunday with a warming trend. We expect a good supply of sunshine both days… the high Saturday will be in the mid 50s, and close to 60 Sunday.

NEXT WEEK: A pattern change means no really cold air for the Deep South next week. Highs will be mostly in the 60s, with lows in the 40s. There will be a risk of showers Monday, and then again toward the end of the week.

ON THIS DATE IN 1982: A “meteorological bomb” exploded in the Atlantic southeast of Newfoundland. The term is used to describe a storm that rapidly intensifies. An intense cyclone off the Atlantic coast capsized a drilling rig killing 84 persons and sank a Soviet freighter resulting in 33 more deaths. The storm produced 80 mph winds that whipped the water into waves fifty feet high.