DOESN’T GET MUCH BETTER: A very dry airmass covers Alabama this morning; the sky is clear at daybreak with temperatures mostly in the 40s. With sunshine in full supply, look for a high in the mid 70s today… the average high in Birmingham on April 27 is 78. The weather stays dry through the rest of the week; with a sunny sky tomorrow the high will be around 80… Friday will be a partly sunny day with a high in the low 80s.

THE ALABAMA WEEKEND: Moisture levels will rise Saturday, but most places will stay dry with a high in the mid 80s. Then, we will bring in a chance of scattered showers and thunderstorms Sunday as a cold front drifts down into Tennessee. This won’t be an all-day rain or a “washout”, but a few spots will see a passing shower or two during the day with a rumble of thunderstorm possible. The chance of any one spot getting wet Saturday is 10-20 percent, and 40-50 percent Sunday. Most of the showers Sunday will be over the northern half of the state.

NEXT WEEK: We will be a in a warm, humid airmass much of the week with some risk of scattered showers and thunderstorms on a daily basis, much like a summer pattern. Cold fronts won’t be able to move deep into the state as the upper ridge holds, and severe weather setups will remain west of the state through the week. Afternoon highs will remain in the 80s, with lows in the 60s… See the Weather Xtreme video for maps, graphics, and more details. 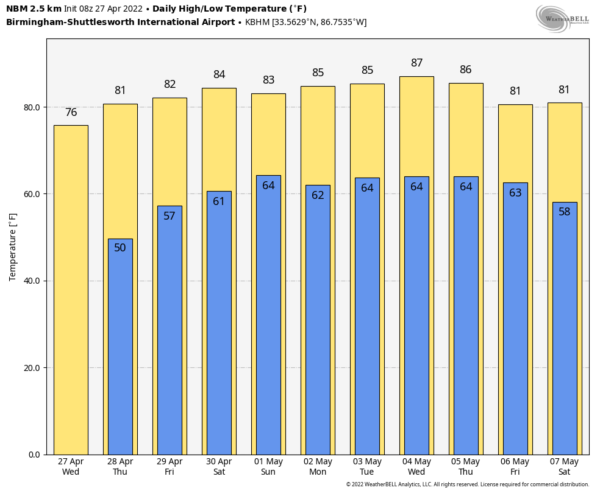 ON THIS DATE IN 2011: A generational tornado outbreak for Alabama. A total of 62 tornadoes; 252 people were killed. There were two rounds of storms that day; a line of severe thunderstorms with damaging winds and embedded tornadoes moved through during the morning hours, then supercell thunderstorms, many featuring violent, long track tornadoes, developed again during the afternoon and evening hours.

The most violent tornado of the event was an EF-5 that tore through communities like Hackleburg, Phil Campbell, and and Tanner. This one started on the ground into southern Tennessee, and killed 72 people across six counties. An EF-4 tornado tore through central Cullman, damaging more than 800 homes and nearly 100 businesses before moving into Morgan and Marshall counties… it killed five members of one family in the community of Ruth in Marshall County.

Another tornado ripped through Pickensville and Cordova during the afternoon, killing 10 people along its 128-mile journey. Cordova was hit twice April 27, 2011. Yet another struck Marion County, killing six. At almost the same moment, another tornado, an EF-4, killed 11 people while tearing through Jackson and DeKalb counties.

At 4:43 p.m., an EF-4 tornado with winds up to 190 mph touched down in Greene County and began its deadly journey toward Tuscaloosa. ABC 33/40 viewers watched in horror as our SKYCAM showed the tornado moving straight through the heart of the Druid City, barely missing DCH Regional Medical Center. The tornado ultimately traveled 80 miles, killing 43 people including six University of Alabama students. Another nine died later from injuries related to the storm. That same storm was soon threatening metro Birmingham. The tornado tore through the Pratt City and Smithfield neighborhoods of the city and then turned north, just before it reached downtown. It crushed portions of Pleasant Grove, Concord and McDonald Chapel.

As evening fell, the tornadoes kept coming. A twister in Greene, Hale and Bibb counties killed seven. In northeast Alabama, an EF-4 tornado scraped across Fyffe, Rainsville and Sylvania, killing more than 25. Another EF-4, spawned from the same supercell that pummeled Tuscaloosa and Jefferson counties, tore through the Shoal Creek valley of St. Clair County, killing 22 before crossing into Georgia. Shortly after 8 p.m., another damaging EF-4 took a meandering path through Elmore, Tallapoosa and Chambers counties, including ripping through areas around Lake Martin.

This was part of a four day event which produced 360 tornadoes in 21 states from Texas to New York to southern Canada.