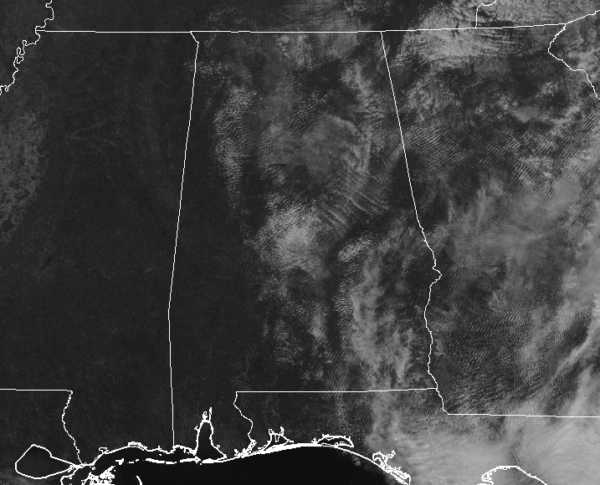 PESKY CLOUDS TO MESS UP OUR SUNSHINE AT MIDDAY
As we move into the 1 o’clock hour across Central Alabama, we have some pesky clouds that have moved over portions of the area from the east and southeast, originating from a disturbance over the southeastern parts of Georgia and down in the northeastern parts of Florida. Temperatures as of the 12 pm roundup were in the upper 50s to the mid-60s. Troy was the warm spot at 65 degrees while the cool spots were Pell City, Gadsden, and Alexander City at 57 degrees.

We’ll continue to have these pesky clouds over the area through the rest of the daylight hours which will make our skies partly to mostly cloudy at times. Afternoon highs will eventually make it up into the mid-60s across the area this afternoon. Clouds will actually increase over the eastern half of the area tonight, but we’ll remain dry. Lows will make it down into the mid to upper 40s.

MONDAY WILL BE THE LAST DRY DAY BEFORE RAIN & STORMS MOVE IN
Monday will be a nice and mild day with more sun than clouds. Warm air will continue to be pulled up from the south out ahead of the next approaching system. However, more clouds associated with that approaching system will begin to move in late. Afternoon highs will make it up into the lower 70s.

Tuesday and Wednesday will be days that feature a good chance of rain and thunderstorms at times as a cold front will struggle to move through the area. The first half of Thursday will be dry, but expect those rain chances to climb rapidly during the early evening hours. Much of Wednesday morning will continue to have elevated rain chances, but we’ll get a lull in the action during the late morning through a good portion of the evening before a surface low develops west of us and moves to the northeast. Locations east of I-59 may actually remain dry until Thursday. Tuesday’s highs will be in the mid-60s to the mid-70s, before making it up into the lower to mid-70s on Wednesday. 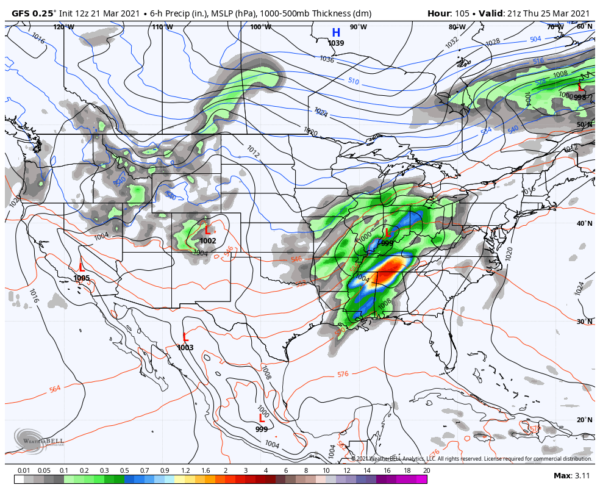 POTENTIAL FOR SEVERE STORMS ON THURSDAY
On Thursday, a surface low looks to form off to our west will move northeastward across portions of Arkansas, Tennessee, Kentucky, and Indiana throughout the day. Out ahead of the accompanying front, rain and thunderstorms will move across the area throughout the day with heavy rain possible during the late-afternoon through the late-night hours mainly across the northern half.

Latest modeled soundings from the GFS show that there will be a decent amount of instability with a good bit of shear and a more than sufficient amount of helicity involved in the atmosphere across the area during the afternoon and early evening hours. At this point, there will be the potential for damaging winds up to 60 MPH and an isolated tornado or two. This, by far, doesn’t look to be a high risk type of event, but you can have a major localized severe event in a lower risk. We are in the main part of our severe weather season, so we can’t let our guard down at all. Highs will be in the upper 60s to the upper 70sfrom northwest to southeast.

FRIDAY WILL BE NICE, BUT STORMS RETURN FOR THE WEEKEND
Showers and storms will move out of the area during the early morning hours on Friday with skies becoming mostly sunny by the afternoon. Highs will range from the upper 60s in the northwest to the upper 70s in the southeast.

Rain and storms will form along a boundary across the southern parts of the state that will begin lifting northward through the day on Saturday. There will be a chance of showers and storms mainly for the southern half of North/Central Alabama. A cold front will help to push that activity out of the area during the pre-dawn hours on Sunday, and leaving us dry throughout the day. The good news is that instability looks to be very limited on this latest model run, so no severe weather is expected. Highs will be in the mid-70s to the lower 80s on both days.