RADAR CHECK: A weakening band of showers is pushing through the Tennessee Valley early this morning… the rest of the state is dry with temperatures mostly in the 60s. Look for a mix of sun and clouds today with a high in the 77-81 degree range; showers are possible, but they should be widely spaced, and much of the day will be dry.

Not much change tomorrow… some sun at times with a high around 80 degrees. A shower can’t be ruled out, but most of the organized rain and storms. during the day will be well to the west of Alabama.

STORMS LATE TOMORROW NIGHT/EARLY THURSDAY: A cold front will push a line of thunderstorms through the state late tomorrow night into the early morning hours Thursday, and those could be strong to severe. SPC has defined an “enhanced risk” (level 3/5) for the northwest corner of the state; a “slight risk” (level 2/5) is up for much of North, Central, and Southwest Alabama… and parts of Southeast Alabama is under a “marginal risk” (level 1/5). 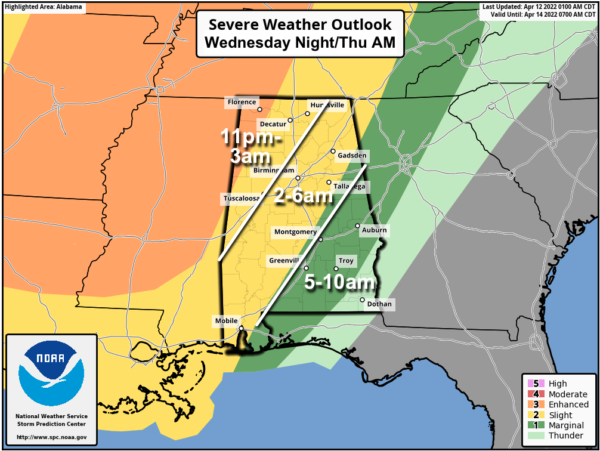 The line should enter the northwest corner of the state late tomorrow night around 11:00 p.m.. it will reach I-59 (Tuscaloosa/Birmingham/Gadsden) around 4-5 a.m… and then moving into East and Southeast Alabama after 6:00 a.m. The storms should weaken after 3:00 a.m. as instability decreases and dynamic support fades.

The main threat will come from strong, gusty winds ahead of the line, but an isolated tornado can’t be totally ruled out, especially over the northwest counties of the state. With this being a “middle of the night” event, but sure you have you NOAA Weather Radio on, and don’t use the “do not disturb” feature on your phone so you can get notifications.

The sky will become partly to mostly sunny by Thursday afternoon as dry air returns… the high will be in the mid 70s. Friday will be dry and mild for most of Alabama as well, but a few showers are possible over the southwest counties around Mobile.

EASTER WEEKEND: A surface front will move up into the state from the south, and meander around the area over the weekend, setting the stage for unsettled weather. Saturday will be cloudy with periods of rain likely, but it won’t rain all day. Showers remain possible Sunday, although they most likely will be fewer in number. Expect highs in the mid 70s both days. 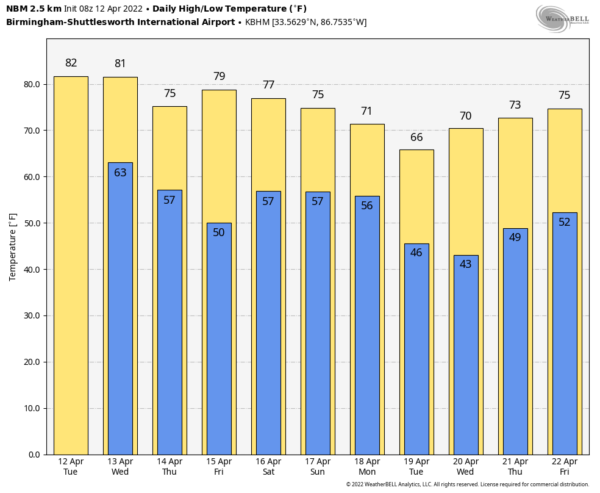 ON THIS DATE IN 1934: Winds atop Mount Washington New Hampshire, averaged 186 mph for five minutes, with a peak gust of 231 mph, the highest wind speed ever clocked in the world at that time. In a report released by the World Meteorological Organization (WMO), that record was toppled in 1996 at Barrow Island, Australia during Typhoon Olivia.

ON THIS DATE IN 2020: A total of 19 tornadoes touched down across North and Central Alabama on Easter Sunday; an EF-2 at Boaz that injured three people. This was part of a larger regional outbreak April 12-13, 2020; during this two-day outbreak a total of 141 tornadoes touched down across 10 states, inflicting widespread and locally catastrophic damage. The strongest tornado was rated high-end EF-4 and occurred in Southern Mississippi, producing estimated winds of 190 mph, reaching a width of 2.25 miles, and causing eight deaths. With a total of 32 tornado-related fatalities, it was the deadliest tornado outbreak since April 27–30, 2014.