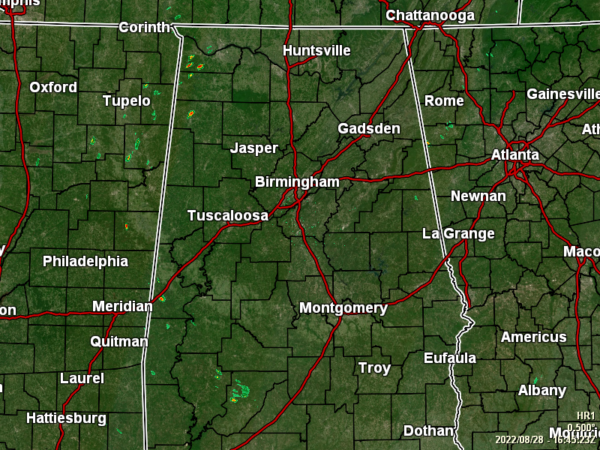 RADAR CHECK: As of 11:45 am, only a few isolated showers are located over the extreme western parts of Central Alabama and up into the western parts of North Alabama. The rest of the area is dry. Temperatures were in the 80s across the area as of 11 am. Talladega and Troy were tied as the warm spots at 87º. Prattville was the cool spot at 82º. Birmingham was sitting at 85º.

REST OF TODAY: Scattered showers and thunderstorms will continue to form through the afternoon hours, with the higher activity occurring over the eastern half of the area. Highs will reach the upper 80s to the lower 90s. Nearly all activity will diminish during the evening hours, with maybe one or two showers lasting into the late night. Lows in the lower to mid 70s.

MONDAY’S WEATHER: More moisture will be available on Monday, and scattered to numerous showers and storms are forecast to form as early as mid-morning and continue through the afternoon hours. Highs in the upper 80s to the lower 90s. 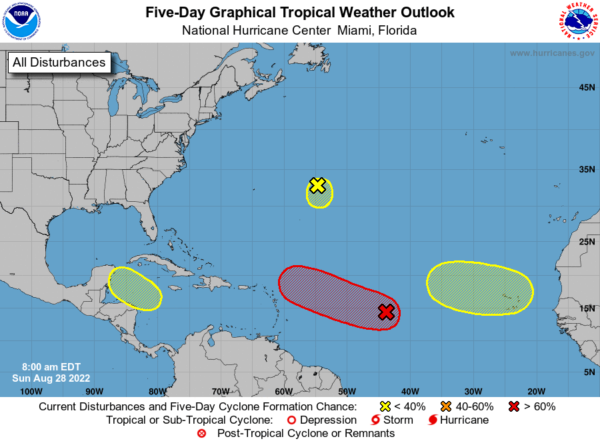 THE TROPICS: Central Tropical Atlantic… A broad and elongated area of low pressure is located over the central tropical Atlantic Ocean. Although the associated shower and thunderstorm activity has increased somewhat since yesterday, it currently lacks organization. Environmental conditions are expected to be generally conducive for gradual development, and a tropical depression is likely to form later this week while moving toward the west and then west-northwest at around 10 mph, toward the waters east of the Leeward Islands.
* Formation chance through 48 hours… low… 30 percent.
* Formation chance through 5 days… high… 70 percent.

Central Atlantic… A small low pressure system located about 600 miles east of Bermuda continues to produce occasional, disorganized shower activity. Strong upper-level winds and dry air are expected to limit significant development of this system while it meanders over the central Atlantic during the next few days, and the low is likely to dissipate by midweek.
* Formation chance through 48 hours… low… 10 percent.
* Formation chance through 5 days… low… 10 percent.