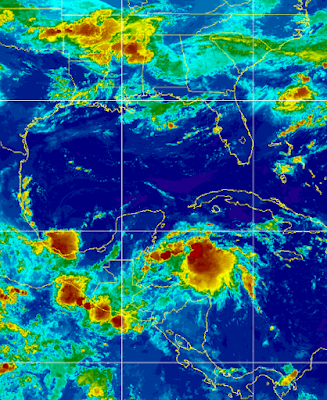 My thoughts today. Well, I have a lot of thoughts but going to hold them in, but officially these are my thoughts. This are in the Caribbean is worth watching for one of two reasons. Either it gets into the Bay of Campeche which is waiting for it as there is a spin there without convection and it would just love this particular piece of convection. Or it forms further to the North and East and could be more of a problem for the Gulf of Mexico. Most of the money is on the BOC system, as it’s typical for the Hurricane Seaosn to get going after an early BOC system forms and dies quickly after slamming the area with heavy rain and flooding.  But, this is late August and this is the time of year we would more likely see a Gulf of Mexico system try and form.

Meteorology is a science filled with mathematics and we can only explain things in the rear view mirror when the facts are all apparent. It’s either an odd slow season or a season about to bust wide open.

This is whats left of an old Invest that made it this far so whatever happens I doubt it’s falling apart.

One way or the other, something is going to happen.

Ps.. more to come but for now it needs to be watched.

Oh and models, that have been wrong frequently, are spinning up African Waves though many seem to want to spin only one wins in the end. 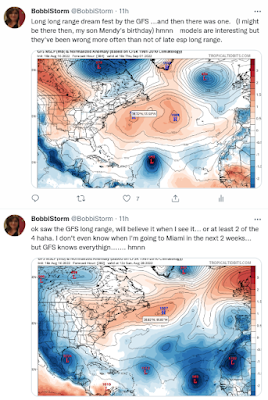 Model below spins up lots of storms.

Next frame they are all gone but one.

Which one will that really be?

..but 1 way or another there’ll be a named Storm!